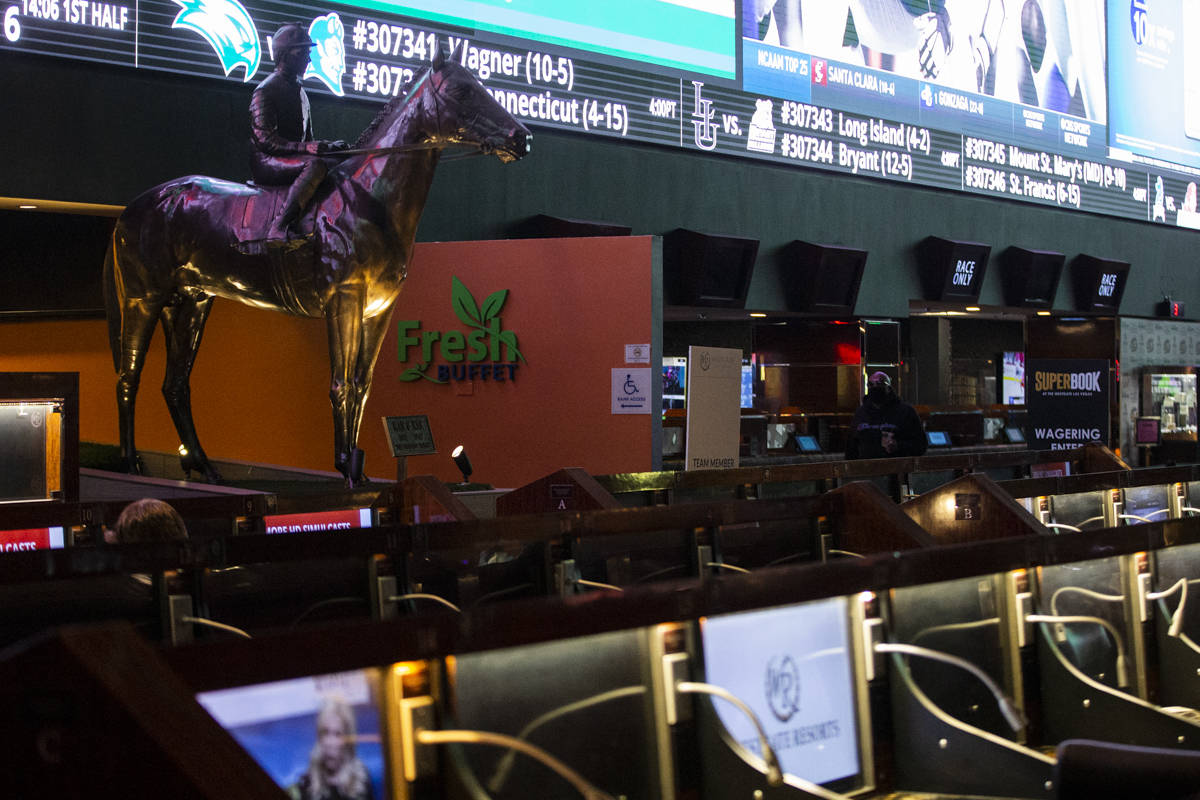 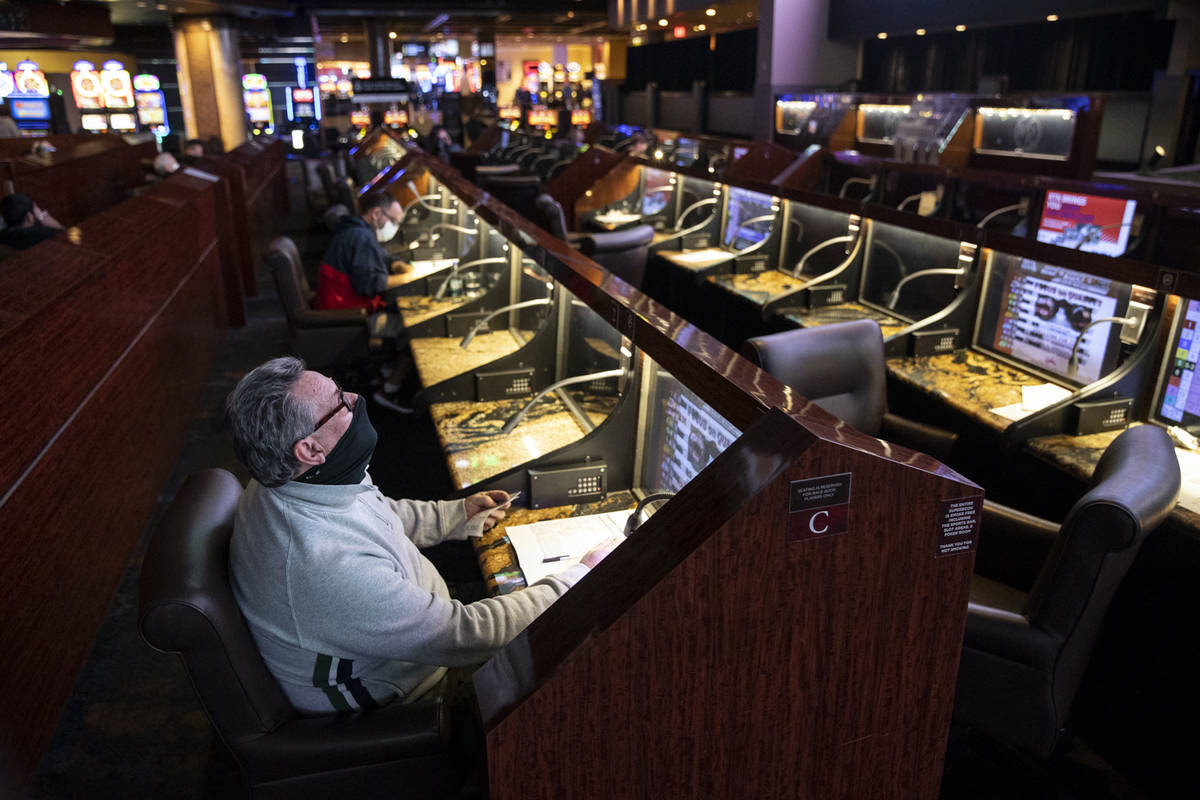 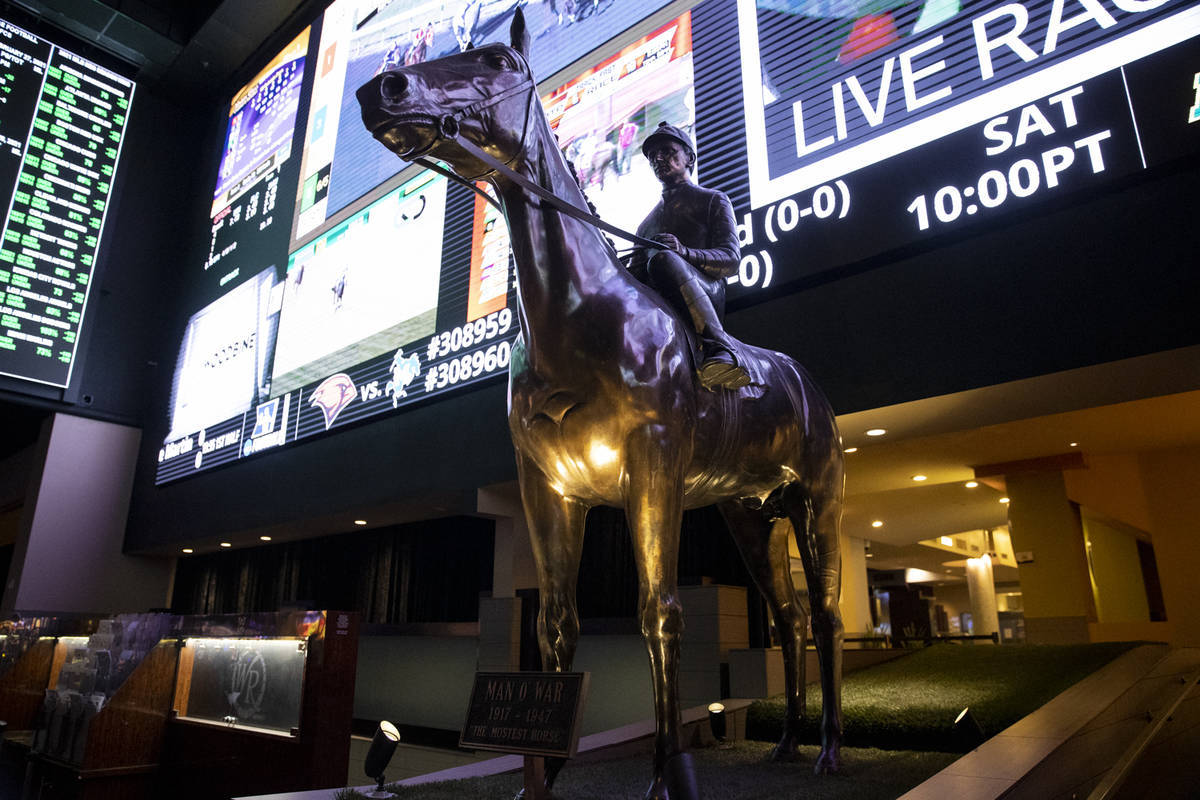 A statue of Man o' War, considered one of the best racing horses in history, at the Westgate sportsbook in Las Vegas, on Thursday, Feb. 25, 2021. (Erik Verduzco / Las Vegas Review-Journal) @Erik_Verduzco

I AM REALLY FRUSTRATED!!!

Those words belong to reader Bruce Little, a retired veterinarian and former thoroughbred horse breeder and owner who moved to Nevada from Illinois in 2007, in part so he could continue to enjoy the sport he has been involved in for most of his life.

The reason for his vexation: the continuing contract dispute between Nevada’s racebooks and Churchill Downs Inc. over how much money the racebooks should pay for the track’s signal, a dispute which has now dragged on for nearly 16 months.

As it did last year, the dispute is preventing Nevada horseplayers from betting on many of the key prep races leading to the Kentucky Derby, including Saturday’s Southwest Stakes from Oaklawn Park. If the matter isn’t resolved soon, Nevada residents and visitors also will have few wagering options for the Run for the Roses on the first Saturday in May.

Far from just complaining, though, Little says he’s ready to do whatever he needs to do to get the dispute resolved.

“It really disturbs me,” he told me this week. “I’m willing to do all I can do from my telephone and computer … to wake these people up either by marching on their offices or mounting a write-in campaign to the governor.”

The Nevada Pari-Mutuel Association, which has not responded to multiple requests for comment since the dispute erupted on Oct. 27, 2019, represents Nevada’s racebooks but does not consider those who inhabit those gaming spaces to be its clients.

And Churchill Downs, which likewise did not respond to requests for comment, is fast developing a reputation as an industry bully that only cares about its bottom line. It added to its notoriety with an announcement Tuesday that it plans to sell historic Arlington Park outside Chicago to a developer while it pursues transferring the track’s racing license to a yet-to-be built facility in the area.

The real problem in Nevada, according to an industry insider who spoke on condition of anonymity, is that the state’s decades-old laws enabling pari-mutuel wagering on horse races are hopelessly outdated and stifle competition by preventing any individual company from negotiating its own deal.

“Without a free market, this will happen again and again,” the insider said of the current dispute, adding that it could have a silver lining if it helps bring about needed structural changes in how the sport is regulated in the state. “It’s going to take some major thing like this to bring it to the forefront.”

In the meantime, if you have any thoughts on the issue that you’d like to share with state regulators, you can submit a public comment to the Nevada Gaming Control Board and Nevada Gaming Commission via email at publiccomment@gcb.nv.gov. Submissions should include the commenter’s name and be 3 minutes or shorter when read aloud.

Southwest, Fountain of Youth this weekend

With or without us, the 3-year-old races will march onward this weekend, with Saturday’s $750,000 Southwest Stakes at Oaklawn and the $300,000 Fountain of Youth Stakes at Gulfstream Park highlighting the action.

In the former, a Grade 3 race run at 11/16 miles, juvenile Eclipse Award winner Essential Quality, 3-2 on the morning line, will make his 3-year-old debut in a field of seven that includes nemesis Jackie’s Warrior (8-5), a perfect four-for-four before tiring late as the favorite in the Breeders’ Cup Juvenile won by Essential Quality.

The Fountain of Youth, a Grade 2 race also run at 11/16 miles, attracted a field of 10 led by 9-5 morning-line favorite Greatest Honour for Hall of Fame trainer Shug McGaughey.

Both races will be part of the “American’s Day at the Races” coverage on Fox Sports 2, with the Southwest expected to go postward at 1:58 p.m. PT and the Fountain of Youth set for 3:10 p.m. PT.