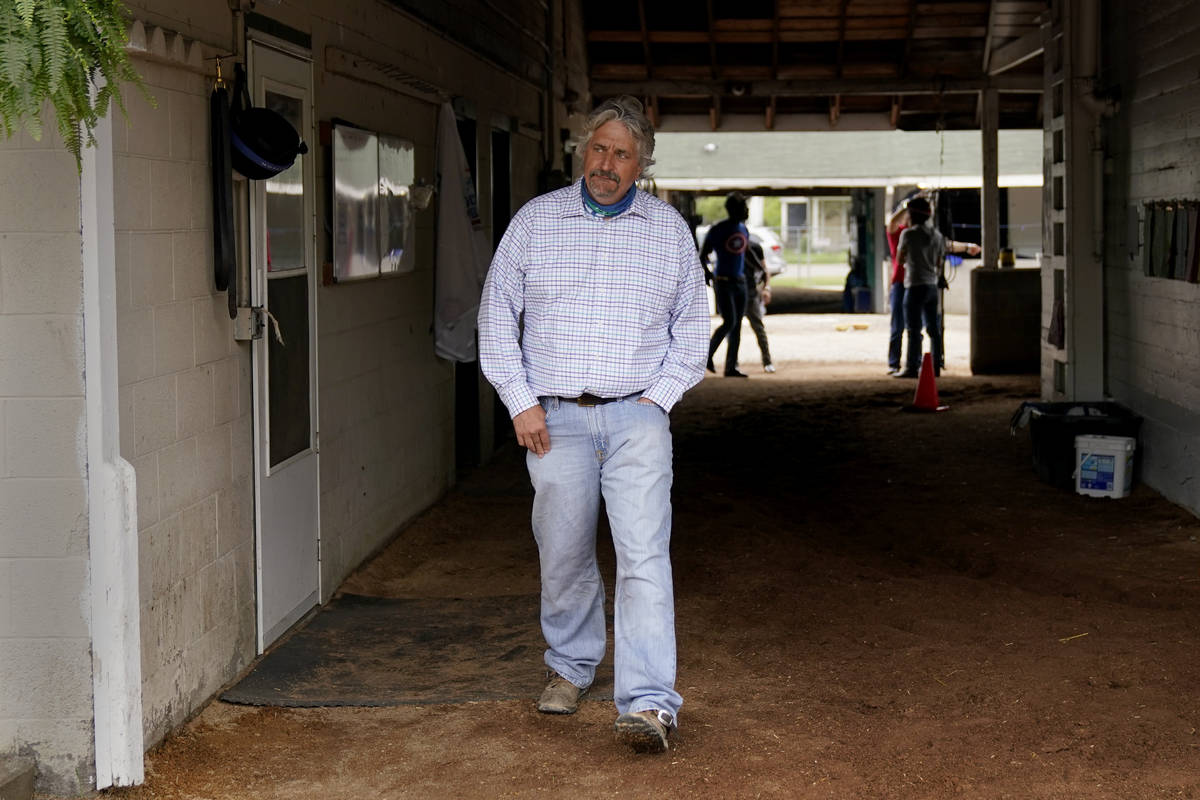 Trainer Steve Asmussen looks out from his barn after a workout at Churchill Downs Wednesday, April 28, 2021, in Louisville, Ky. The 147th running of the Kentucky Derby is scheduled for Saturday, May 1. (AP Photo/Charlie Riedel)

Lots of horse racing news was made over the past week, so let me pour you some catch-up.

First, there’s a tremendous achievement to be acknowledged: Steve Asmussen breaking the all-time record for wins by a North American trainer.

Victory No. 9,446 occurred Saturday in the fifth race at Saratoga, snapping the record held by the late Dale Baird. As of Thursday, Asmussen, 55, had padded his total to 9,450.

Asmussen, a Hall of Fame trainer best known for his work with multiple Grade 1 winners Curlin, Rachel Alexandra and Gun Runner, is a fine example of pedigree handicapping. Born into a racing family, he began his career as a jockey at 16, then switched to training after growing too large — a bit over 6 feet, according to a Keeneland biography — to continue riding professionally.

After winning his first race with Victory’s Halo at Ruidoso Downs in New Mexico in 1986, he slowly but steadily expanded his operation to become national in scope, primarily based in the Midwest.

In a different vein, the thoroughbred trainer known as the “juice man” pleaded guilty this week to a single federal charge of giving his horses illegal performance-enhancing drugs designed to avoid detection in post-race lab tests.

Jorge Navarro, 46, one of two high-profile trainers caught in a federal investigation into doping of racehorses, on Tuesday withdrew his not-guilty plea to one of multiple charges pending against him and instead pleaded guilty.

In doing so, he also implicated fellow trainer Jason Servis. Navarro said he provided Servis, the conditioner of Maximum Security and other high-profile horses, with an “imported, misbranded bronchodilator” intended to enhance horses’ performance. Maximum Security, you’ll recall, was posted as the winner of the 2019 Kentucky Derby before being disqualified for interference at the top of the stretch.

Navarro faces up to five years in prison when he is sentenced Dec. 17.

It’s also the government’s opportunity to squeeze the “juice man.” As part of the plea deal, he agreed to pay $25.86 million in restitution to victims who have yet to be identified in court documents.

On the subject of high-profile trainers in hot water, we got an update this week on Hall of Famer Bob Baffert’s legal challenge aimed at heading off the disqualification of Medina Spirit from his victory in this year’s Kentucky Derby due to a positive post-race test for the steroid betamethasone.

It seems the colt’s urine still is undergoing tests at a New York lab. Results are not expected for several more weeks at least.

The one takeaway from Monday’s hearing was that the judge in the case intends to send it back to the Kentucky Horse Racing Commission once the urine testing is complete rather than rule immediately on the merits of the challenge by Baffert and Medina Spirit’s owner, Amr Zedan.

The $600,000 Mr. D. Stakes (formerly the Arlington Million) and the $400,000 Beverly D. Stakes, two of eight stakes races on the Saturday card at Arlington Park, and the $500,000 Fourstar Dave Handicap and $200,000 Saratoga Special at Saratoga, also on Saturday, highlight the weekend stakes action.

Del Mar has a relatively quiet weekend stakeswise, with the $80,000 CTT and TOC Stakes on Saturday and the $150,000 Solana Beach Stakes on Sunday.