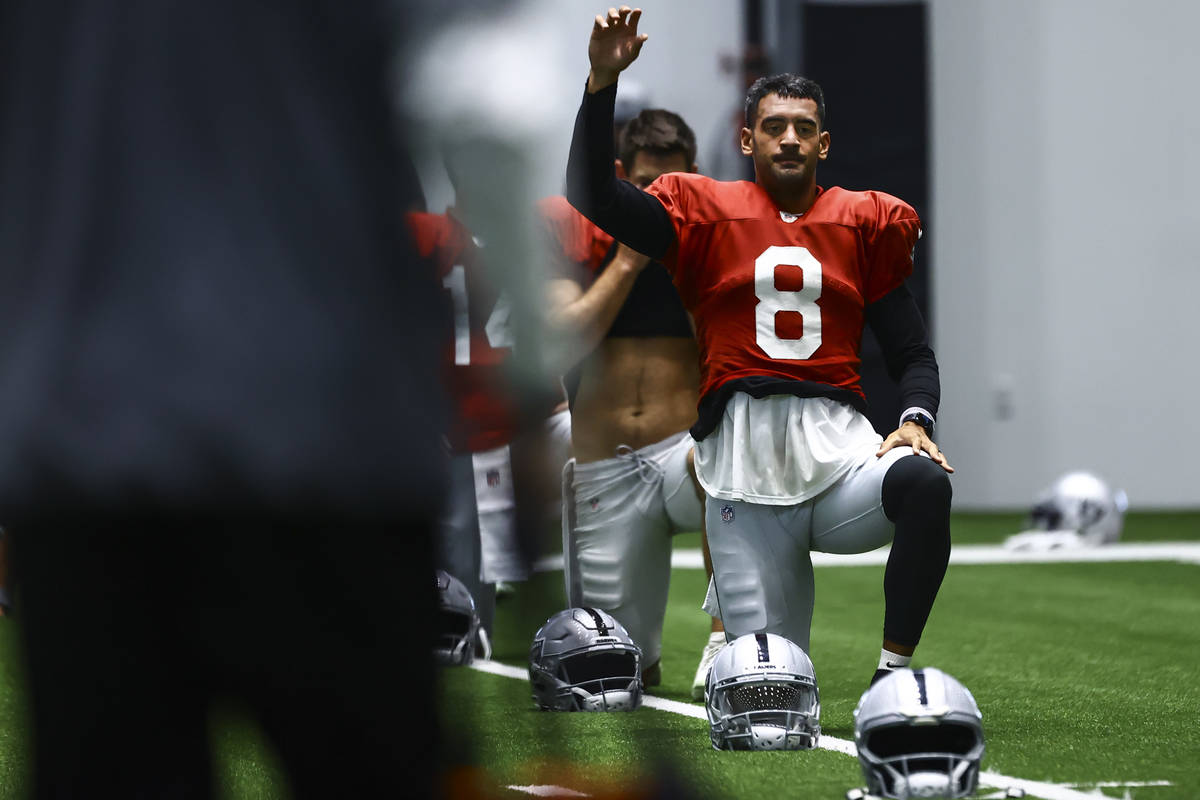 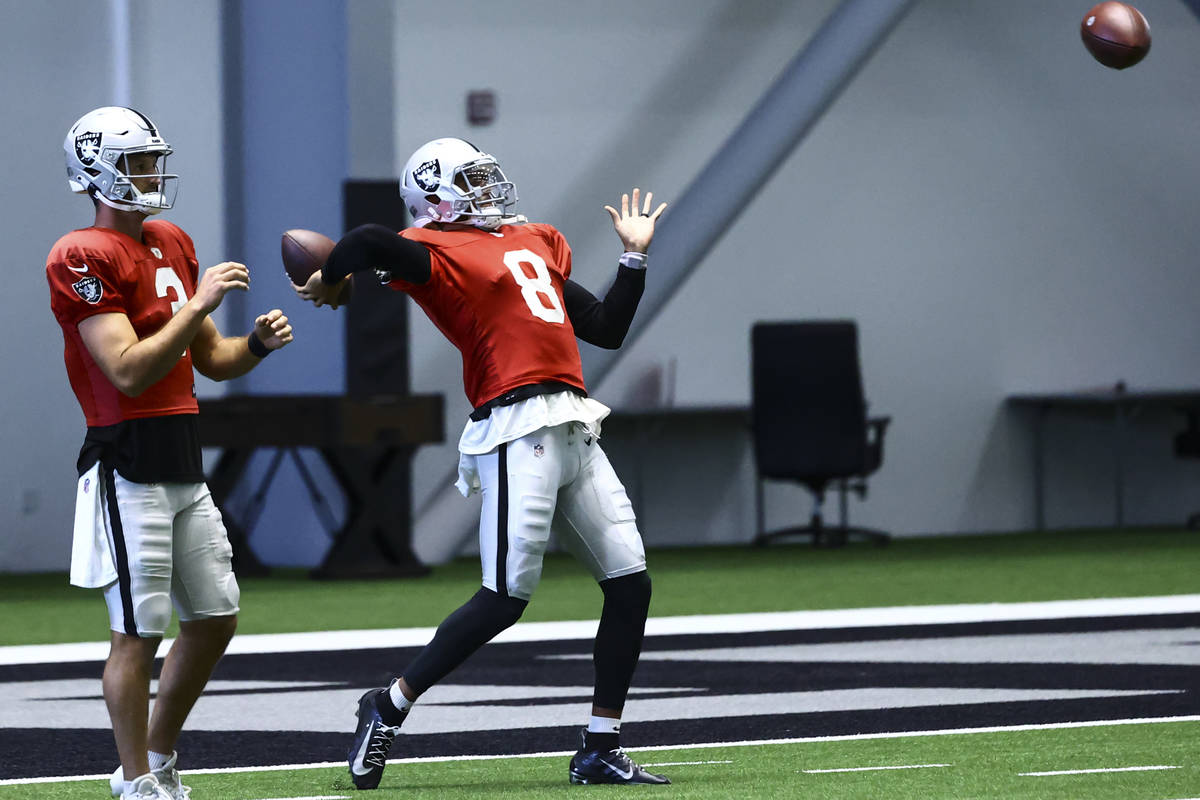 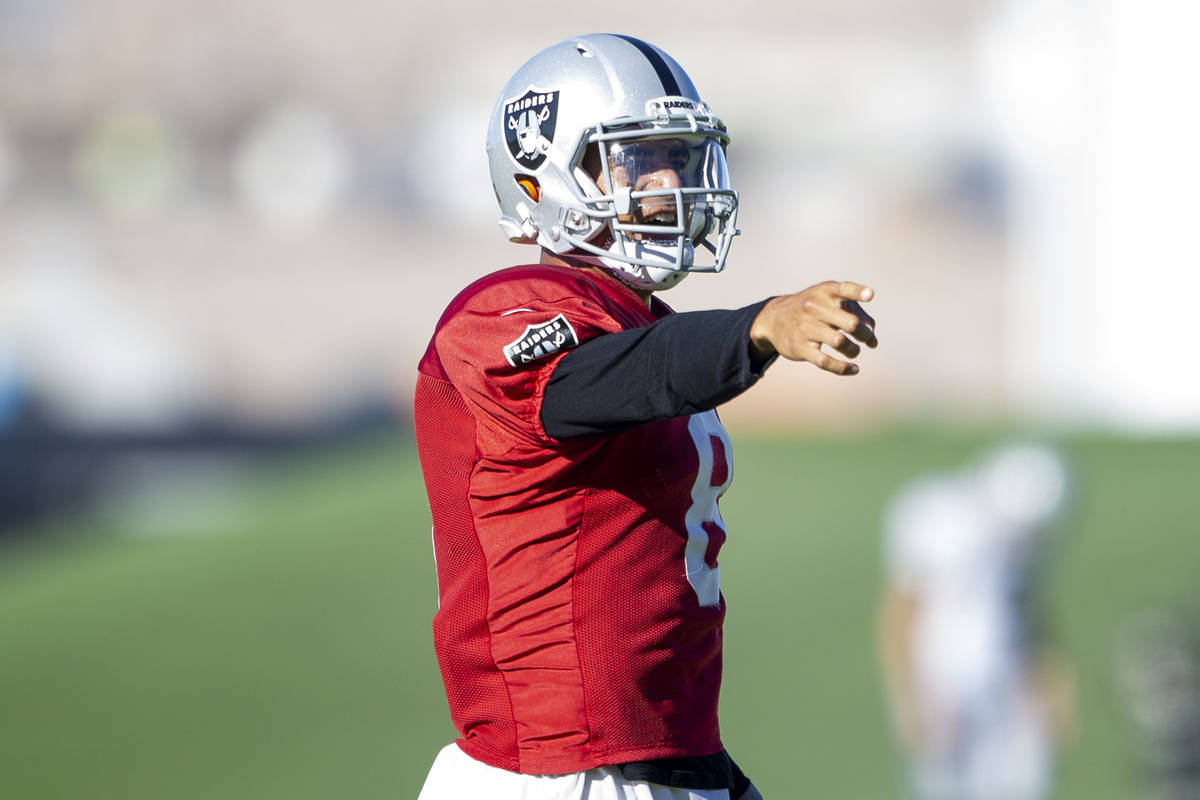 Marcus Mariota is one of the NFL’s top backup quarterbacks. He has one year remaining on a team-friendly contract with the Raiders.

He says all the right things about enjoying Las Vegas and seamlessly fitting into the offensive system and having fun around a great group of guys.

He’s like a pro surfer from his native Hawaii. Says he likes coming to work each day.

But if another team wanted to deal for him as its starter, Mariota would book a Southwest flight out of here faster than any A-list preferred group might board.

The Raiders, on the other hand, can stand pat. They don’t have to move him.

They can wait for the right offer. What to do with Mariota is a good problem to have.

Mariota on Sunday said he monitors those training camp situations across the league — hello, Indianapolis — where injuries at quarterback have opened the possibility of a trade.

The Colts lost starter Carson Wentz to a foot injury and have been splitting first-team reps with second-year player Jacob Eason and sixth-round pick Sam Ehlinger. They also signed journeyman Brett Hundley. Read those names again. No wonder Mariota has been mentioned so often.

It’s also why the Raiders should demand somewhat of a small ransom if Indianapolis calls on him. Or if any other team does as well, for that matter. And that’s even after the five interceptions Mariota has thrown in camp, including two on Tuesday.

Teams lose starting quarterbacks early in a season and often the prospects of a postseason berth go with them. The Colts have a playoff roster, but how much has that margin shrunk with Wentz going down?

It’s not necessarily about what the Raiders might gain in moving Mariota — I would begin negotiations with a future second-round pick and perhaps not come off it — but what they might lose.

Not many outside the organization believe the Raiders are a playoff team again this season. It seems a popular record to predict is 8-9. They think differently.

Derek Carr enters his eighth season at quarterback and has missed just two regular-season games. He’s a better bet to start each week than a memorial flame being lit before kickoff.

But it’s still the NFL. And if the feeling inside is that a Top 10 offense will finally be supported by a not-so-awful defense, there are far worse fates if Carr goes down than being able to turn to Mariota, a seven-year pro with 61 career starts.

“I think the level of excitement for all of us is that Coach (Jon) Gruden does a great job creating roles for each and every player,” Mariota said. “I look forward to carving out that role.”

He should get the chance. Mariota is finally healthy after battling ankle and pectoral injuries last season. So Gruden is more apt to use him in special packages that play to Mariota’s running strengths. The coach doesn’t call the same plays for him as Carr.

“You wouldn’t either,” Gruden said.

Remember the glimpse. Mariota replaced an injured Carr in Week 15 against the Chargers last season and completed 17-of-28 226 yards with a touchdown and interception. He also ran for 88 yards and a score in 30–27 overtime loss.

Which is why if playoff hopes are alive at any point this season, they shouldn’t disappear if Mariota — for whatever reason — replaces Carr. You can’t say that about most NFL teams in regard to their No. 2 quarterback.

I don’t know if any other NFL team has called on Mariota during camp. Or if the phone will soon ring.

But while you always have to answer, the Raiders might be smart to make it a quick conversation unless an offer knocks Gruden’s visor off.

Until, well, you really need him.