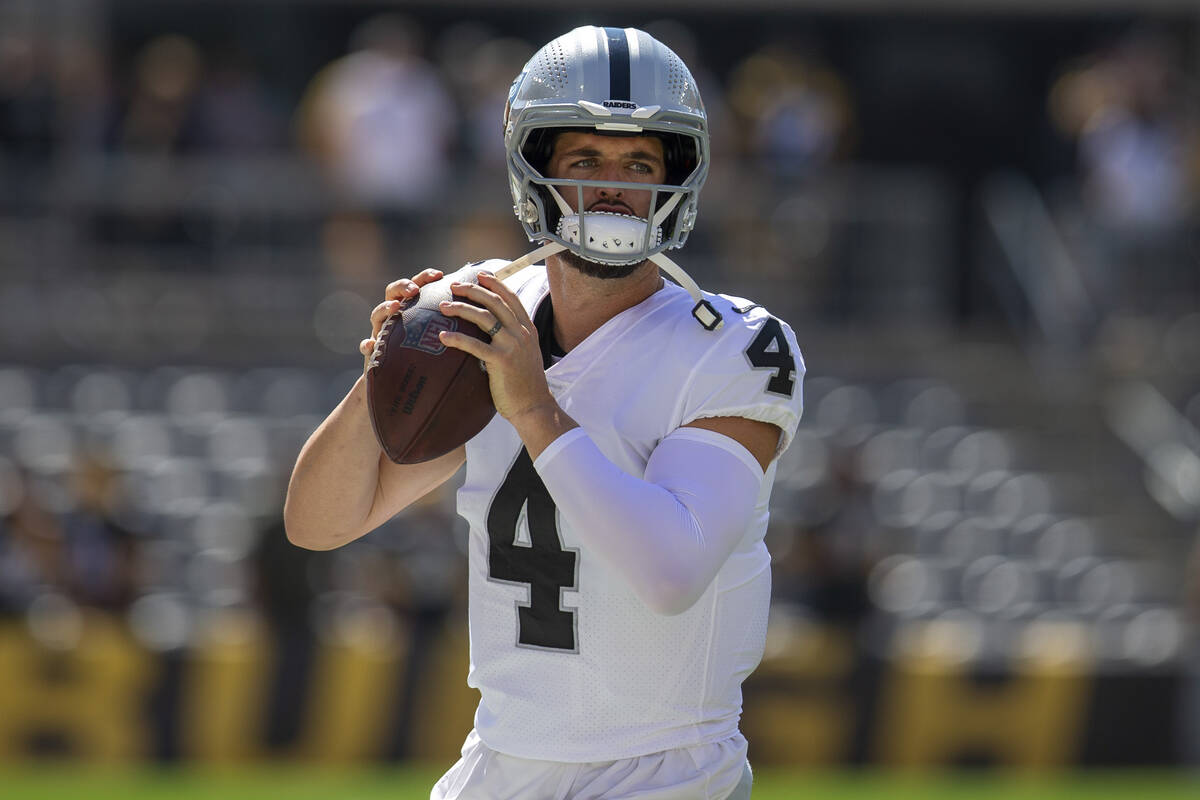 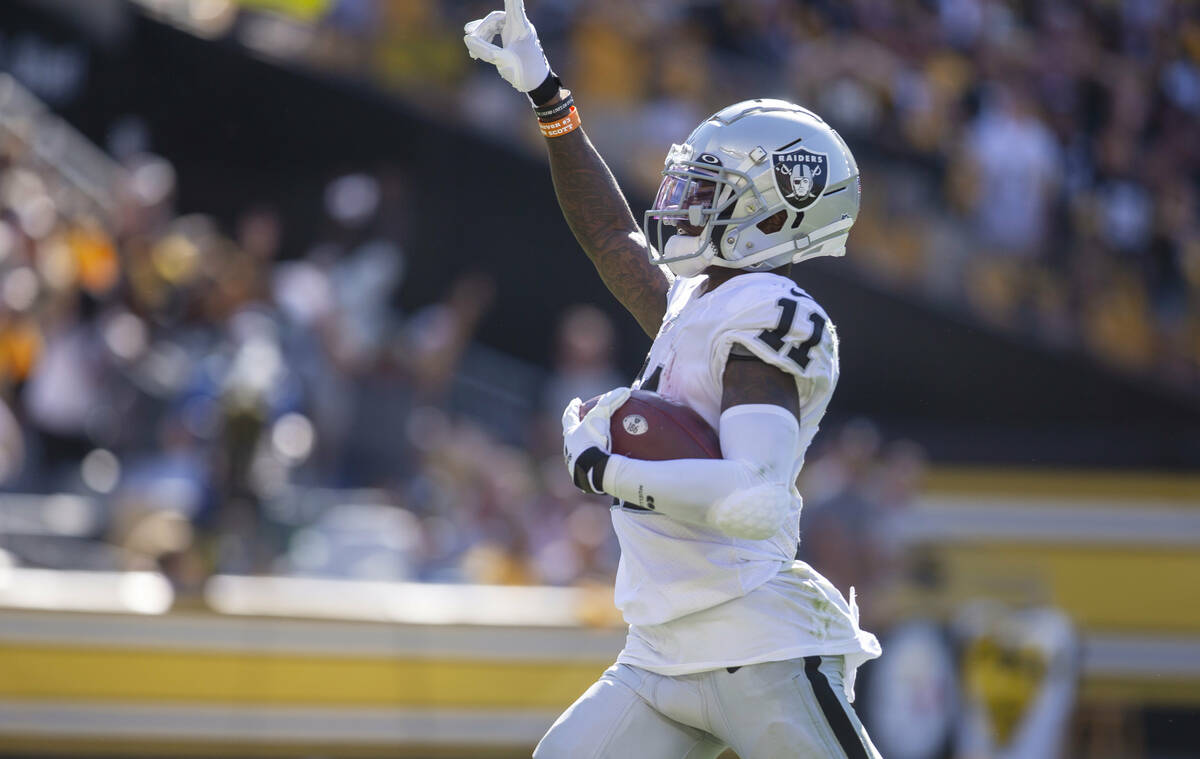 Raiders wide receiver Henry Ruggs III (11) runs into the end zone for a 61-yard touchdown during the fourth quarter of an NFL football game against the Pittsburgh Steelers on Sunday, Sept. 19, 2021, at Heinz Field in Pittsburgh. (Heidi Fang/Las Vegas Review-Journal) @Heidi Fang 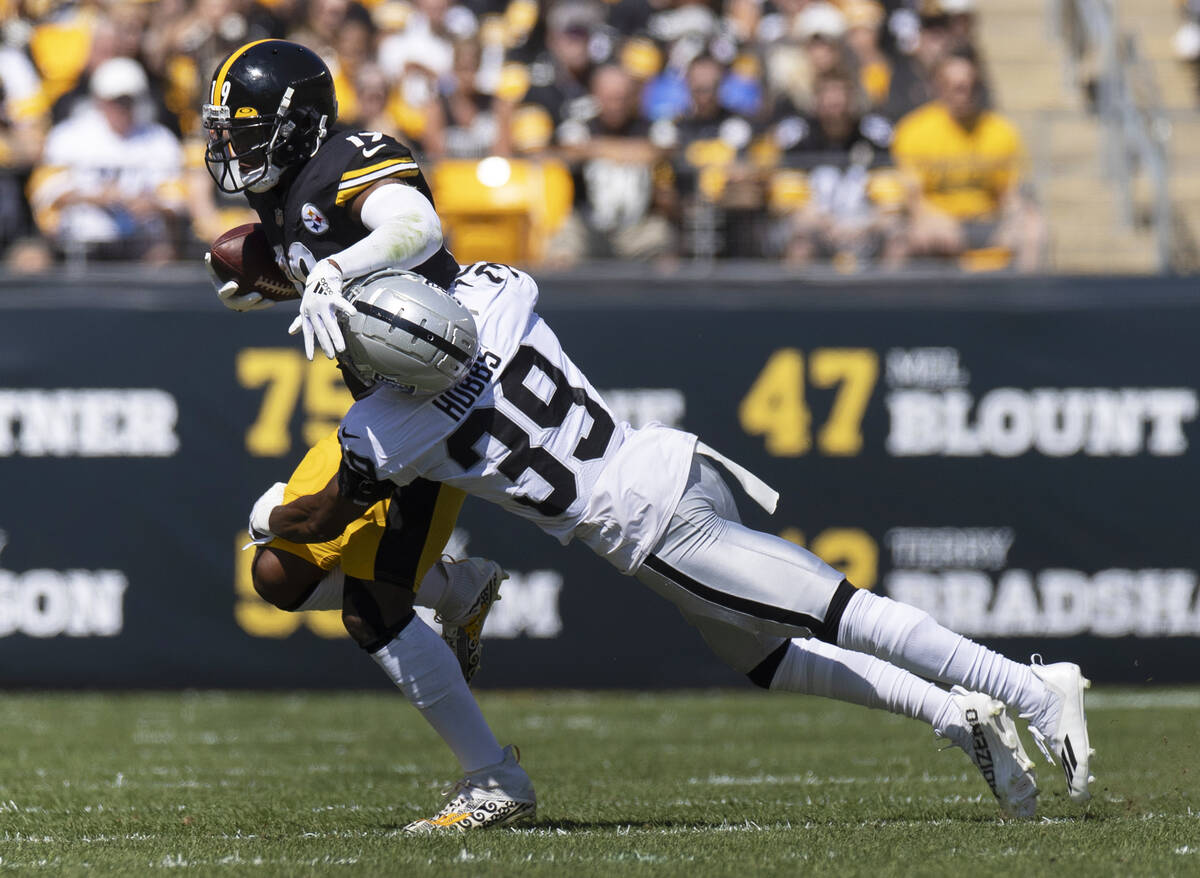 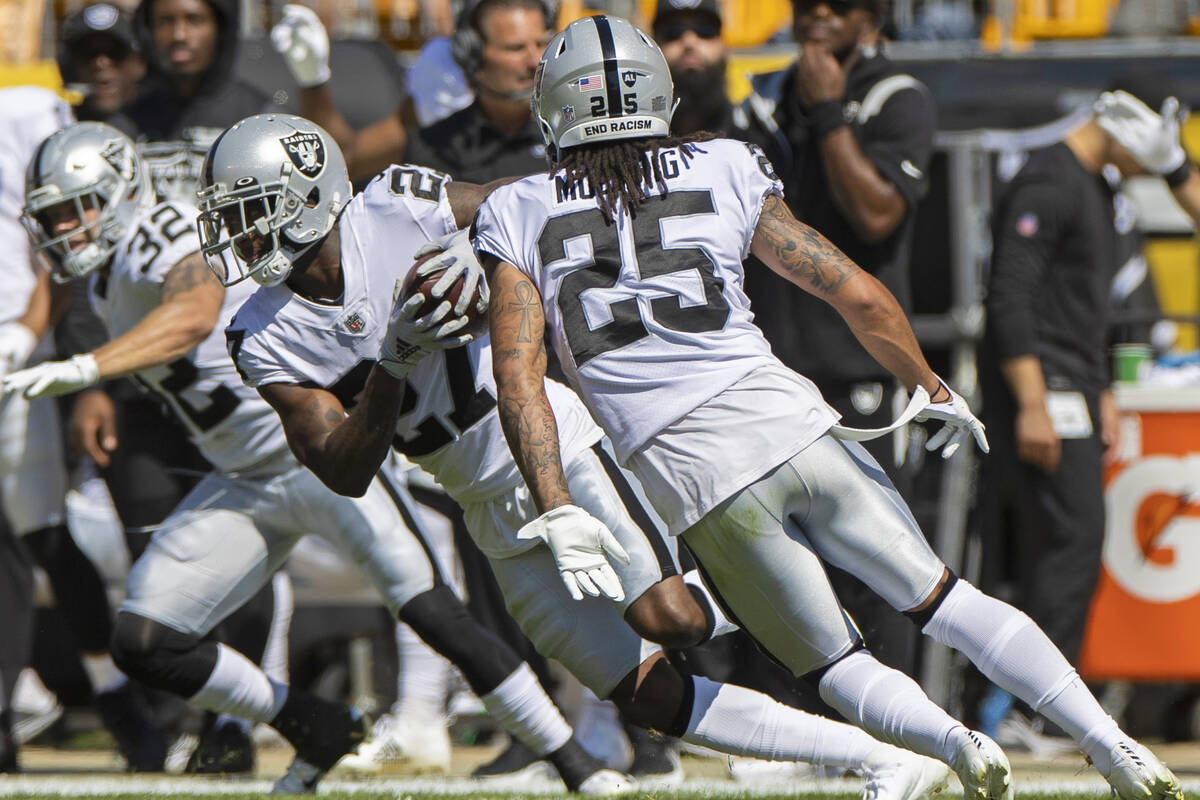 Raiders cornerback Trayvon Mullen (27) runs back an interception with teammates Raiders safety Trevon Moehrig (25) an Raiders defensive back Dallin Leavitt (32) in the first half during an NFL football game against the Pittsburgh Steelers on Sunday, Sept. 19, 2021, at Heinz Field, in Pittsburgh, PA. (Benjamin Hager/Las Vegas Review-Journal) @benjaminhphoto

Grading the Raiders’ 26-17 victory against the Steelers.

The Raiders might be one injury away from Jon Gruden suiting up at right tackle. A rebuilt offensive line sent another body (Alex Leatherwood) to the infirmary with an oblique strain and yet kept on producing. Derek Carr (28 of 37 for 382 yards and two scores) completed passes to eight players. Henry Ruggs led the way with five receptions for 113 yards, including the game-changing 61-yard TD strike that pushed the lead to 23-14 with 9:35 left. The Raiders managed only 52 yards rushing, but Carr and his aerial success overcame it. Hunter Renfrow (five catches for 57 yards) again came up big in key spots.

These are the Raiders, right? Right? A second straight win again showed a physical and tackling side not seen around the franchise in some time. Sure, there were a few coverage breakdowns, but the Raiders received two sacks from tackle Solomon Thomas — the first multi-sack game of his career — and a team-high 12 tackles from linebacker Denzel Perryman. Trayvon Mullen had an interception of Ben Roethlisberger while adding six tackles and two pass defends. Thomas added three quarterback hurries and a tackle for loss. Johnathan Abram had seven tackles and Nate Hobbs six.

Daniel Carlson began his NFL career in Minnesota as a fifth-round draft pick out of Auburn. He was waived early in the 2018 season. Weeks later, he was signed by the Raiders. What a find. He made all four field-goal attempts Sunday — from 46, 33, 41 and 45 yards. AJ Cole added four punts with an average of 47.5 yards.

Given the number of injuries his team was facing and the fact it traveled East on a short week to face the Steelers, this was easily one of Gruden’s best coaching jobs since returning to the sidelines. The Raiders weren’t going to run the ball. Like, at all. So they mixed and matched short, intermediate and deep passing routes and still were able to own time of possession by nearly nine minutes. Gruden’s play-calling on critical downs late was terrific. 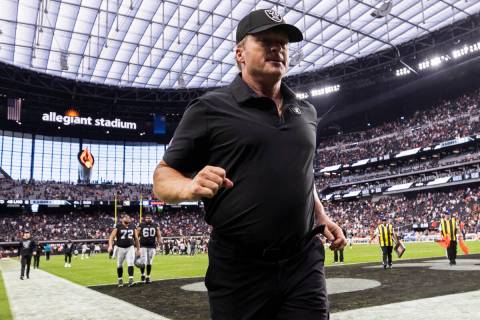 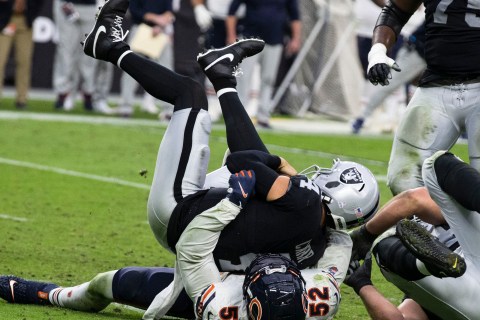