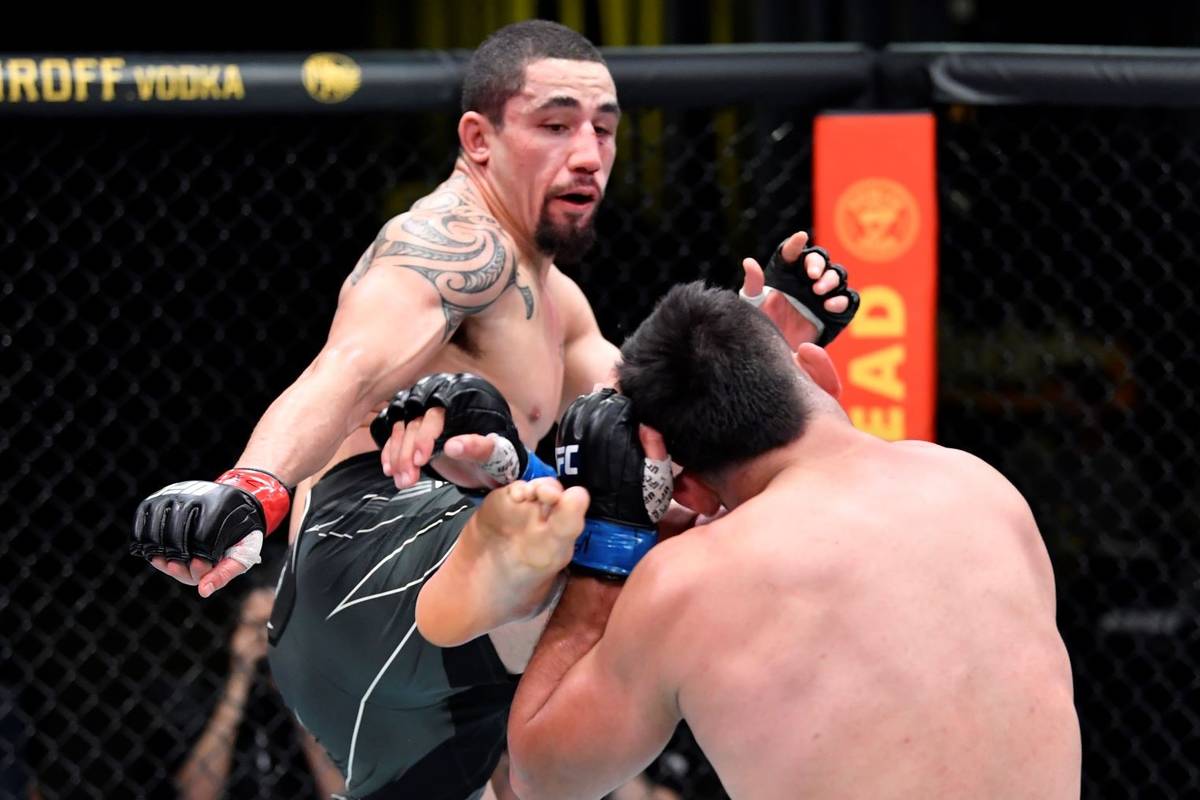 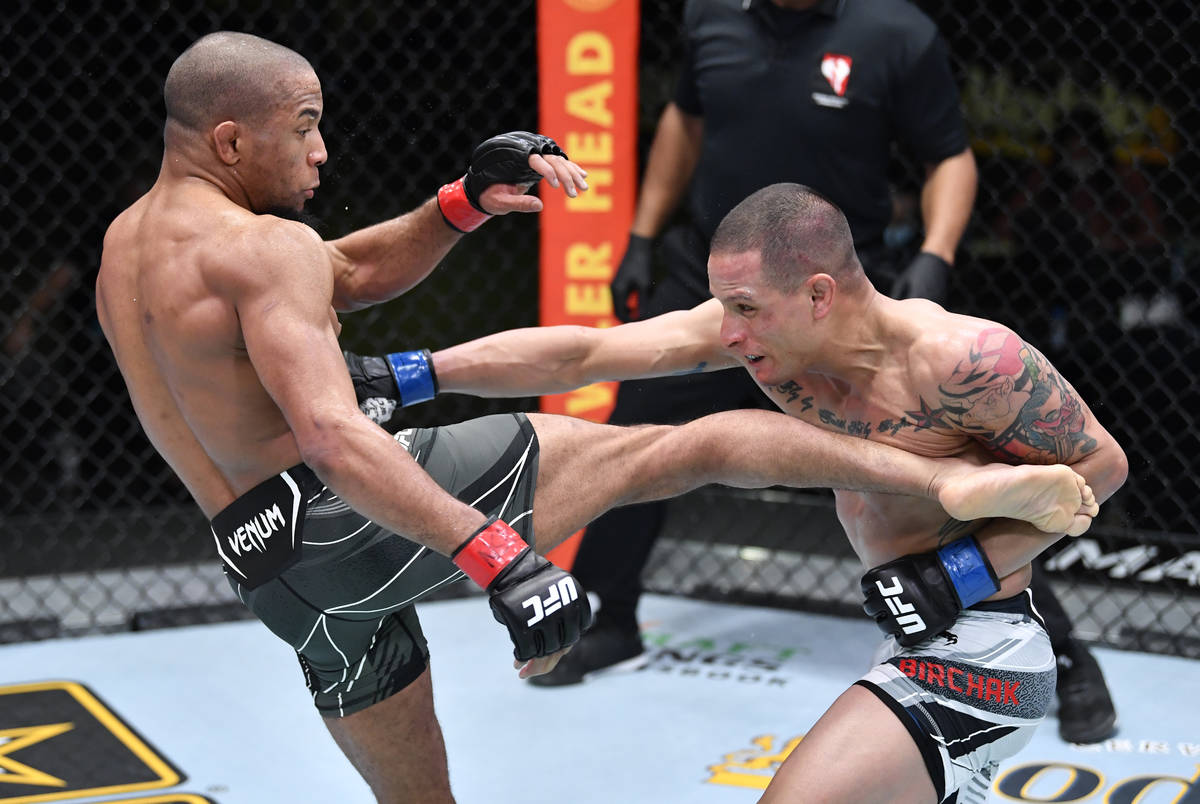 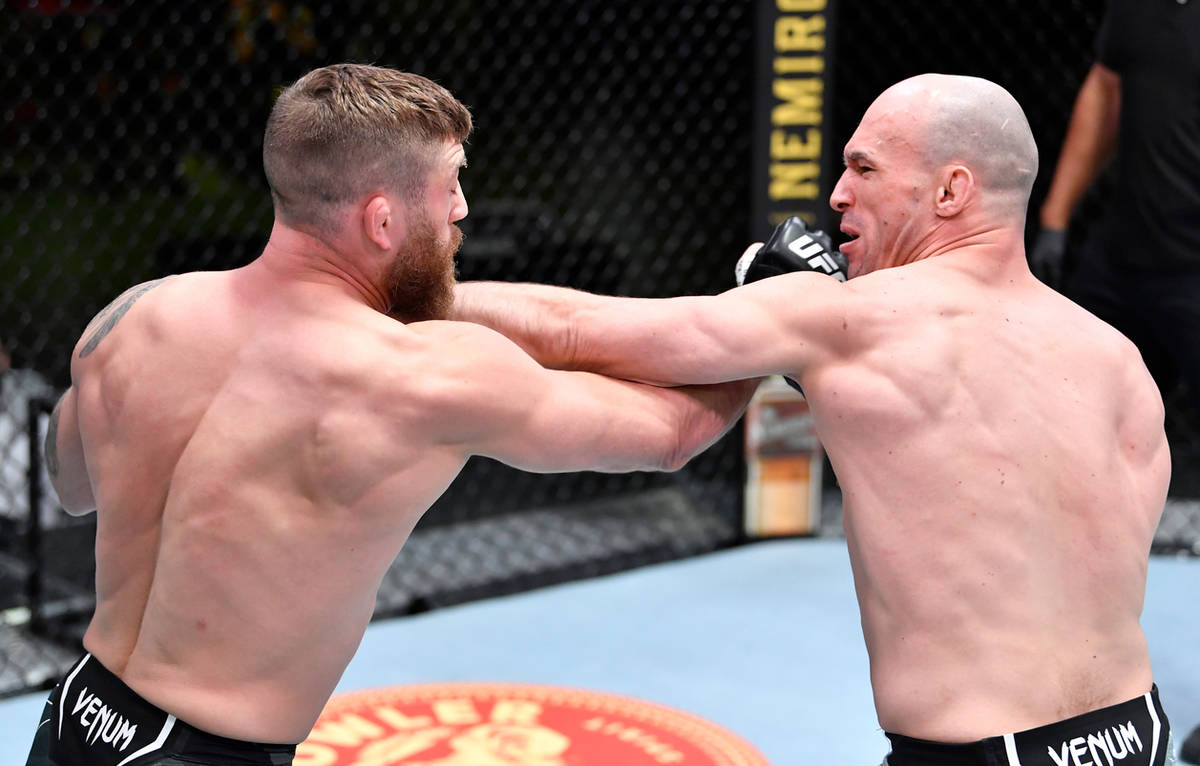 Bartosz Fabinski of Poland and Gerald Meerschaert trade punches in a middleweight fight during the UFC Fight Night event at UFC APEX on April 17, 2021 in Las Vegas, Nevada. (Photo by Chris Unger/Zuffa LLC) 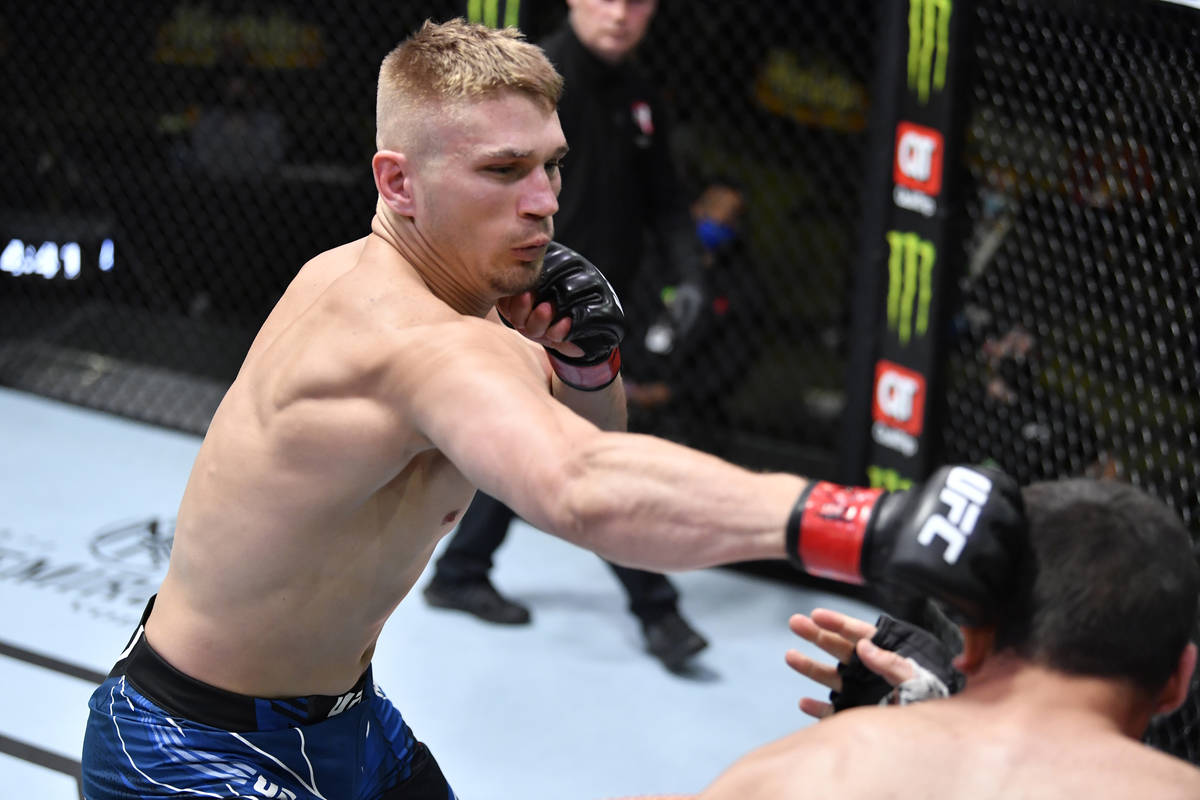 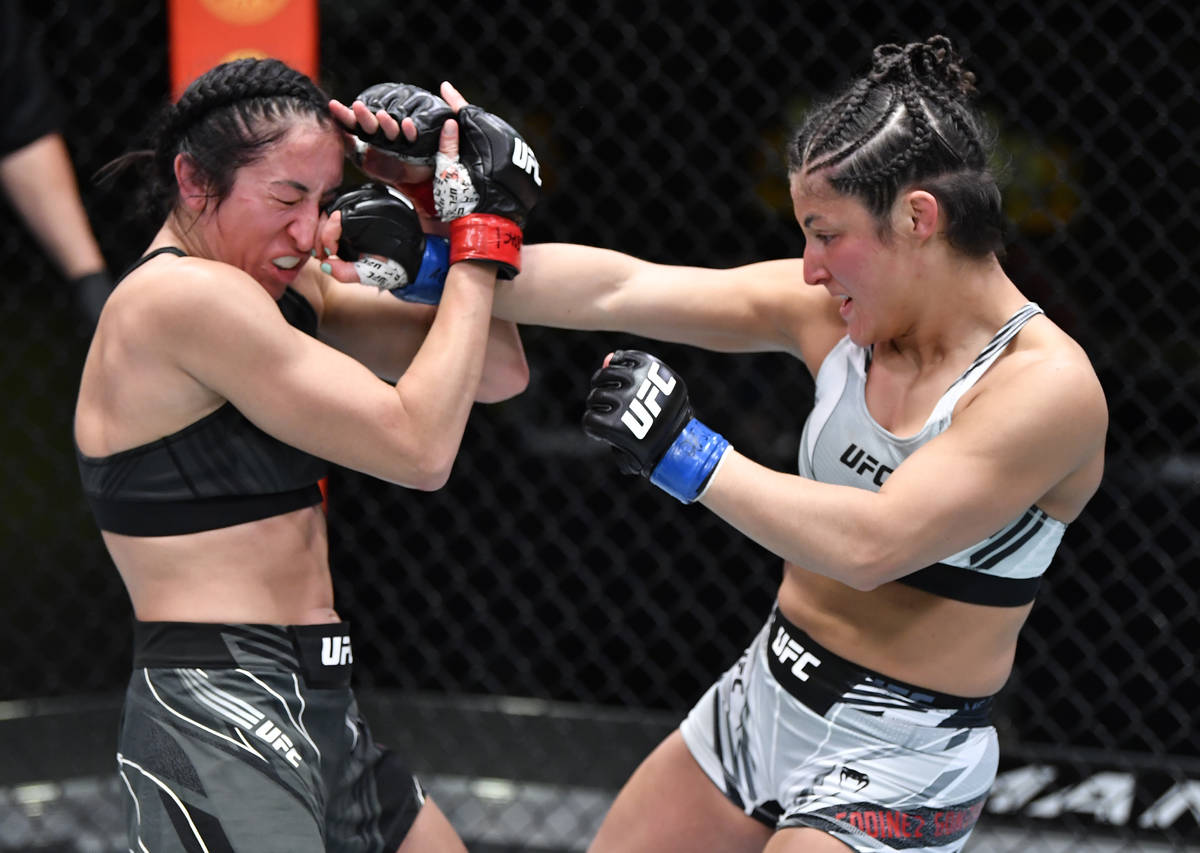 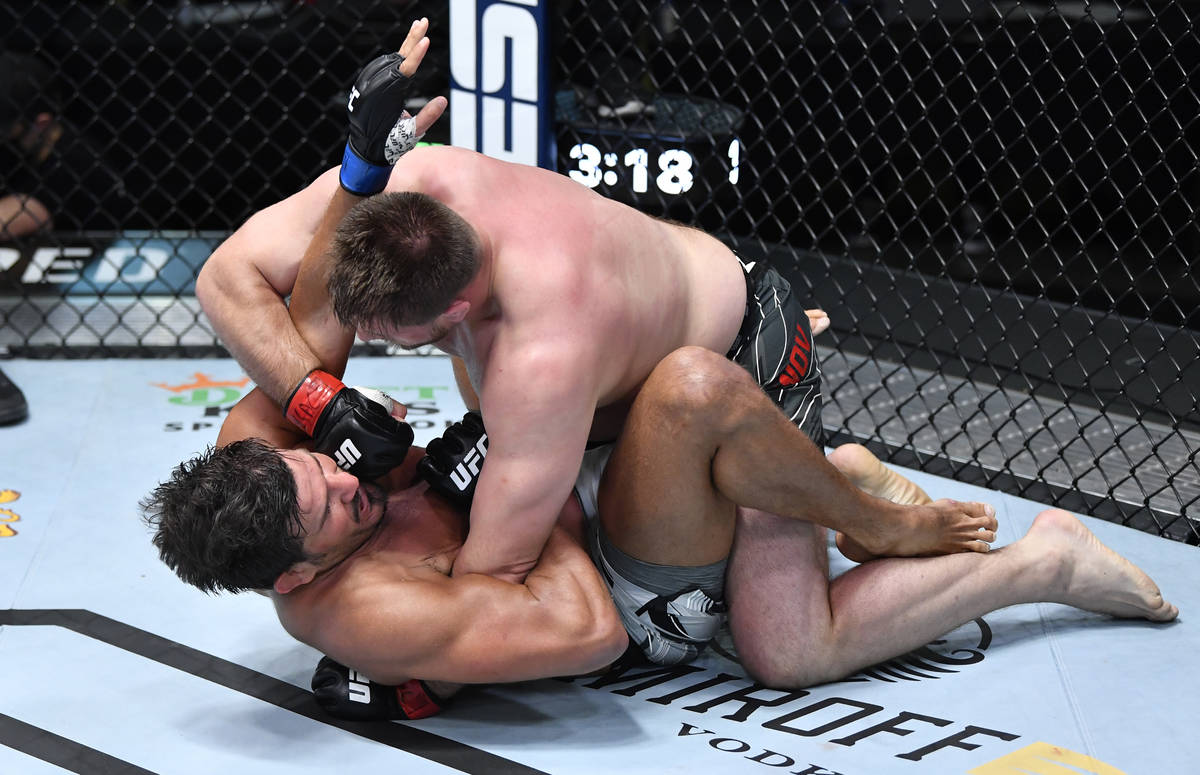 Alexandr Romanov of Moldova punches Juan Espino of Spain in a heavyweight fight during the UFC Fight Night event at UFC APEX on April 17, 2021 in Las Vegas, Nevada. (Photo by Chris Unger/Zuffa LLC) 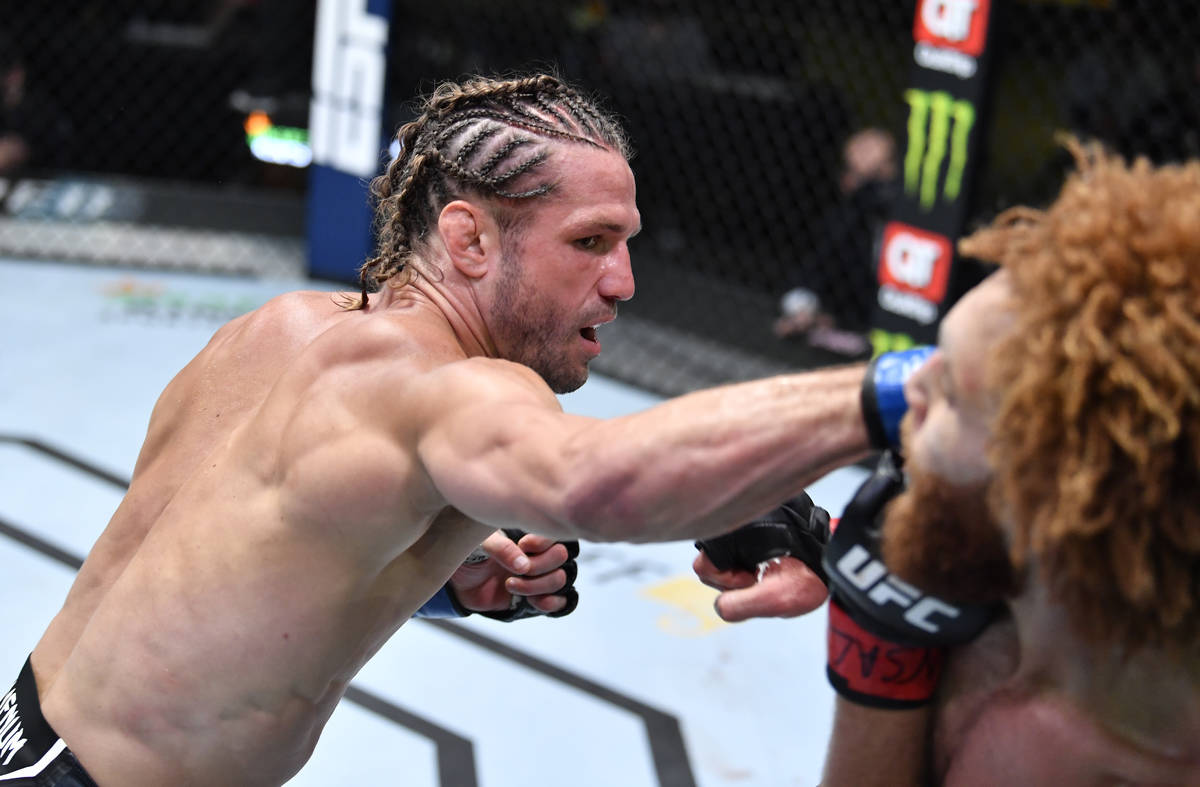 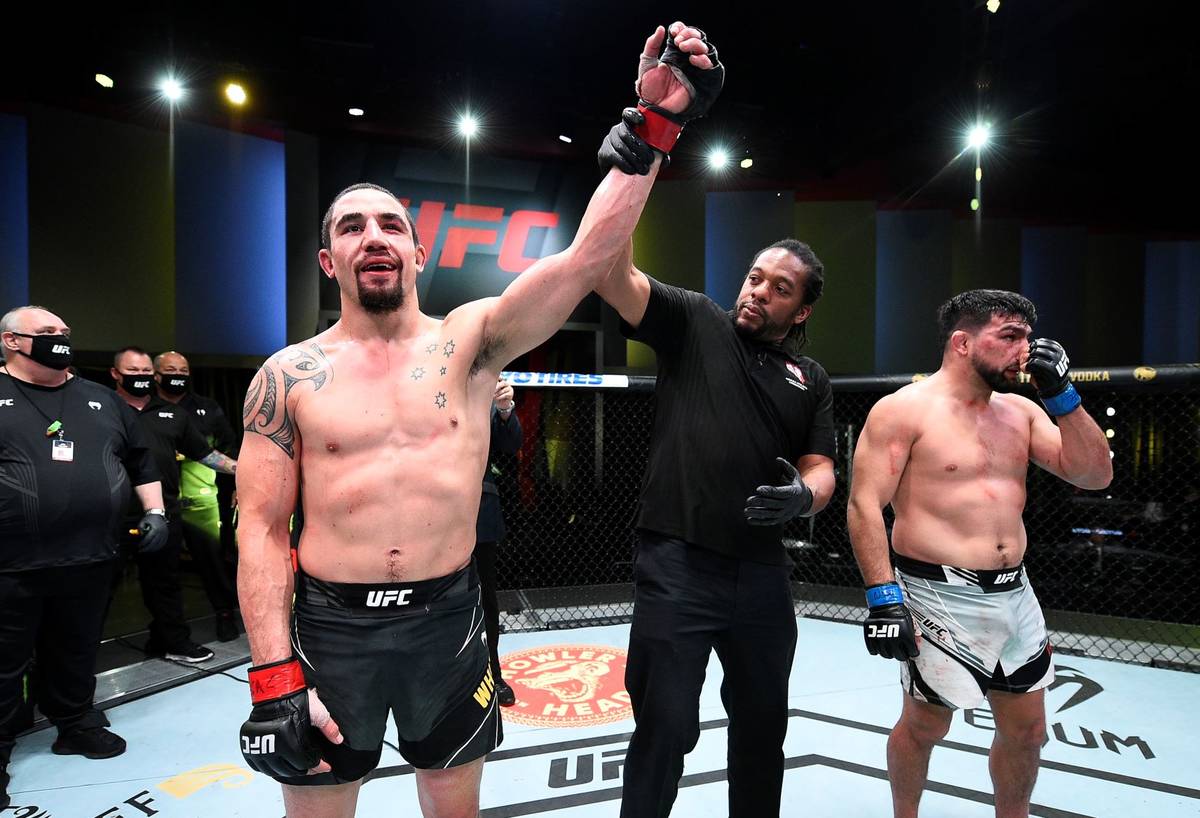 Robert Whittaker of Australia reacts after his victory over Kelvin Gastelum during the UFC Fight Night event at UFC APEX on April 17, 2021 in Las Vegas, Nevada. (Photo by Chris Unger/Zuffa LLC)

There are levels to this.

That was abundantly clear at UFC on ESPN 22 on Saturday, when former middleweight champion Robert Whittaker outclassed Kelvin Gastelum, overwhelming him to earn a decisive unanimous decision win that should set him up for a title rematch with Israel Adesanya.

Whittaker controlled the first round, outlanding Gastelum in the striking exchanges and then shooting for a successful takedown midway through the round. Gastelum only got back to his feet with a few seconds remaining and couldn’t do anything of substance.

The heavy-handed Gastelum continued to come forward in the second, but Whittaker picked him apart from the outside with his jab and followed with high kicks. With Whittaker clearly up three rounds to none, Gastelum landed a takedown in the fourth, only to see Whittaker pop right back up to his feet. Gastelum knew he needed a finish in the final round and he fought like it. But Whittaker again flexed his elite fight-IQ, taking Gastelum down and holding him on the mat for the final seconds of the fight.

Whittaker and Gastelum were scheduled to meet in February 2019, when Whittaker was the middleweight champion. But “The Reaper” was hospitalized on the morning of the fight, forcing its cancellation. He later lost the belt to Adesanya.

This was Whittaker’s third straight win, all coming against elite competition. He mentioned a possible September rematch with Adesanya in New Zealand.

“There is no fight that makes sense for me other than that title shot,” he said. “And that’s the shot that I want, and I’m getting.”

In the co-main event, former UFC heavyweight champion Andrei Arlovski earned a unanimous decision win over Chase Sherman. Arlovski, who closed as a betting underdog for the 17th straight fight, moved around the cage and avoided most of Sherman’s power punches to earn three scorecards of 29-28 in his favor. Sherman tried to draw Arlovski into a firefight in the final round, but Arlovski stuck to his game plan.

“Victory is more important, and when I didn’t stick with game plan, it’s sometimes not really good end for me,” he said. “My coaches, they told me just move around, keep your hands up and do what you have to do.”

Abdul Razak Alhassan had no answer for Jacob Malkoun’s wrestling attack and fell to 0-3 in fights that go past the first round. Malkoun, a training partner of Whittaker, weathered an early storm and then repeatedly took the fight to the mat en route to a unanimous decision win (30-27, 30-27, 30-27).

The scheduled co-main event between Drakkar Klose and Jeremy Stephens was canceled for a bizarre reason. After Stephens shoved Klose during Friday’s weigh-in, Klose ended up in the hospital with a neck injury. UFC officials plan to re-book the fight.