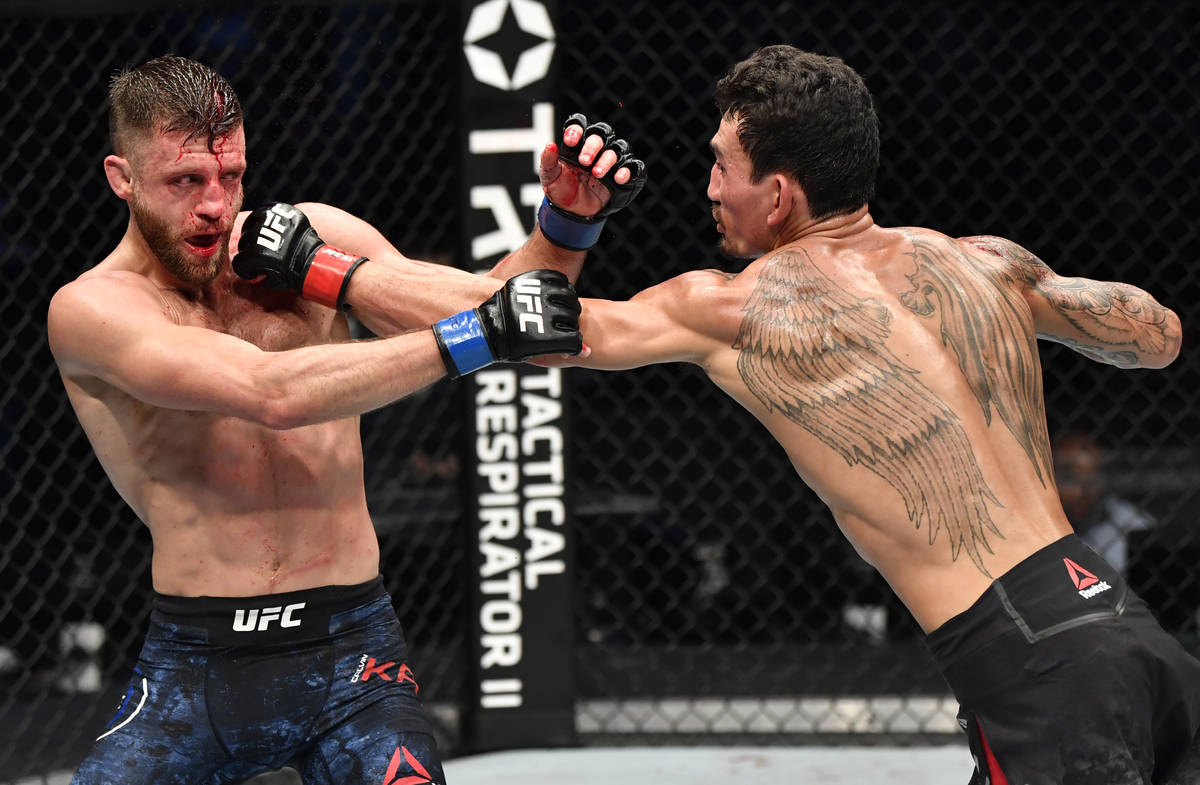 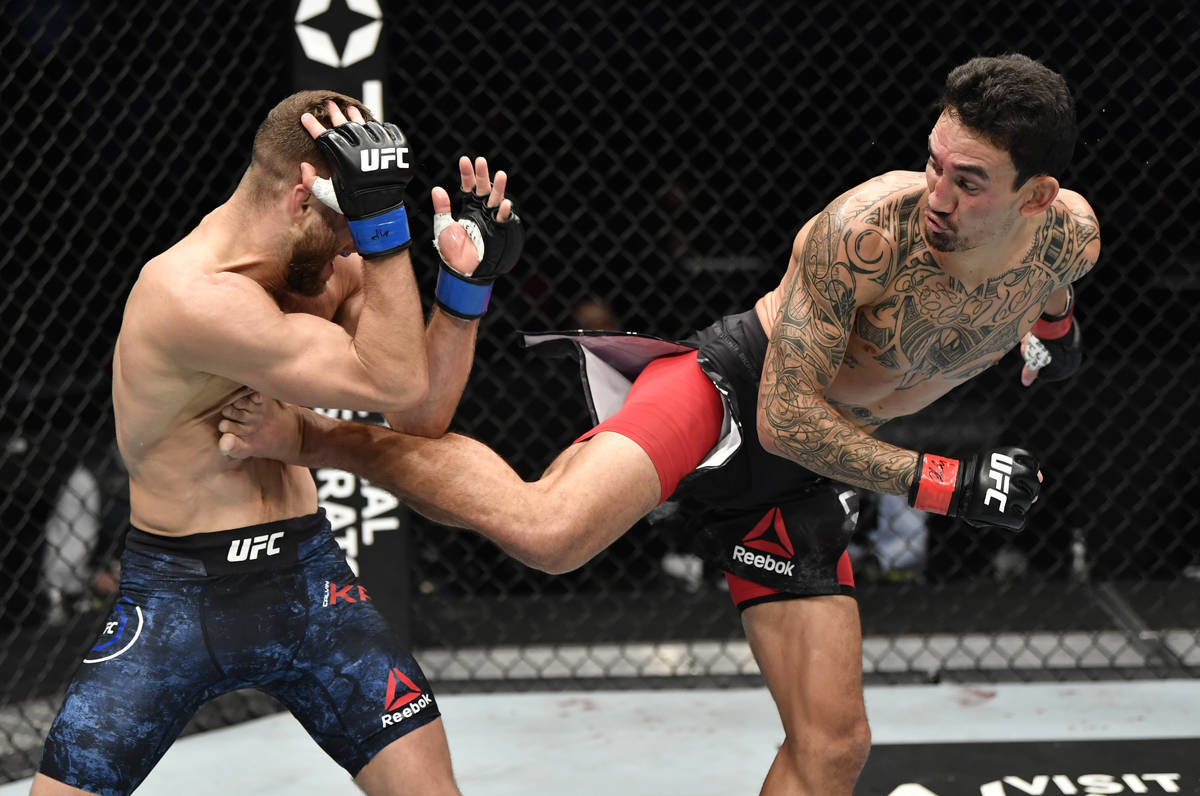 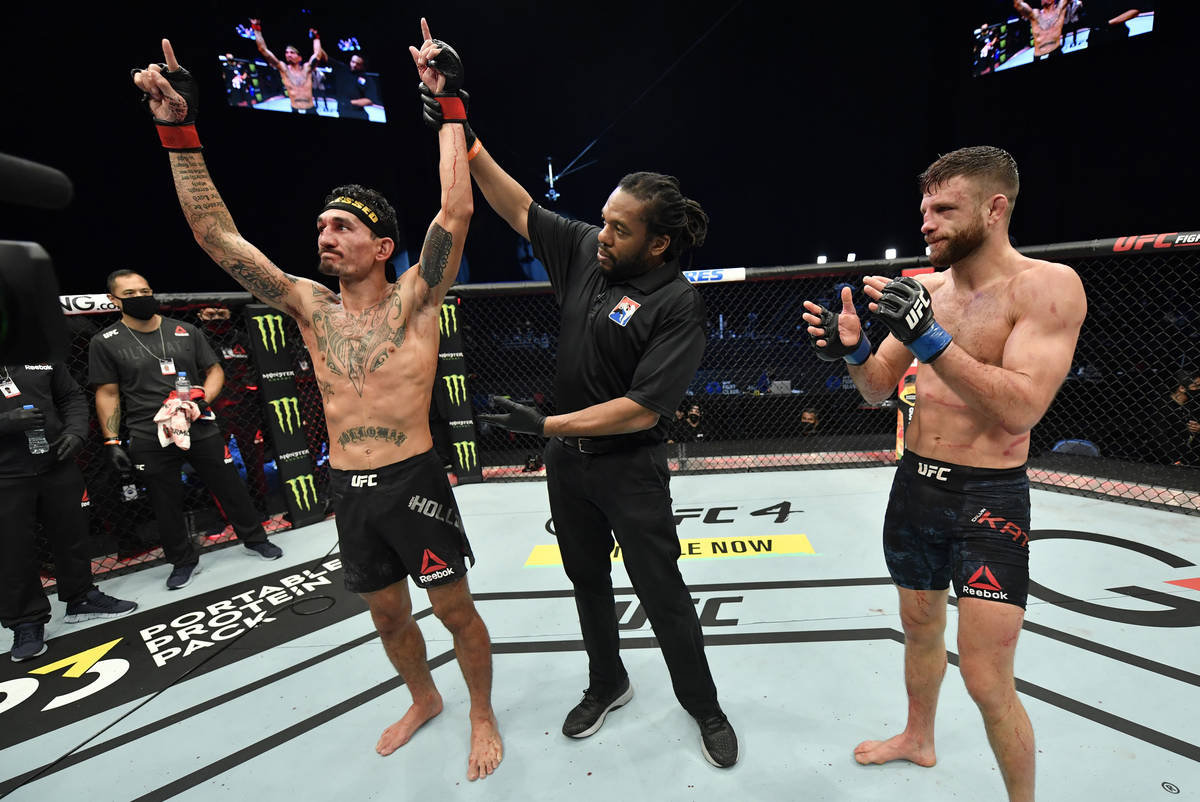 Max Holloway celebrates after his unanimous-decision victory over Calvin Kattar in a featherweight bout during the UFC Fight Night event at Etihad Arena on UFC Fight Island on January 17, 2021 in Abu Dhabi, United Arab Emirates. (Photo by Jeff Bottari/Zuffa LLC)

The chants started rising late in the second round and reached a crescendo as the action peaked in the fourth round of a wild main event.

“Holl-o-way. Holl-o-way,” the crowd of about 2,000 inside Etihad Arena in Abu Dhabi chanted in unison in recognition of former UFC featherweight champion Max Holloway, who turned in one of the most impressive performances of his career Saturday.

Holloway won a dominant unanimous decision over Calvin Kattar in the UFC’s first event on ABC and first before a live audience since March.

Holloway landed a UFC record 445 significant strikes in the five rounds, breaking his record of 290 set against Brian Ortega in 2018. The Holloway-Ortega fight had the record for most combined significant strikes with 400, meaning Holloway’s total Saturday exceeded that mark. He connected on a record 141 in the fourth round alone.

The former champion added style points throughout, posing and smiling and even landing a no-look punch for good measure.

Kattar had referred to himself as a senior and Holloway a freshman because of his age and experience edge, a slight Holloway took to heart.

After a particularly flashy striking display, Holloway stopped and turned to the cageside commentators.

“The freshman came to play today,” he said.

Holloway wasn’t ready to let the comment go after the victory.

Referee Herb Dean and Kattar’s corner would have been justified in stopping the fight, but Kattar stayed on his feet and mounted sporadic periods of effective offense in what was a bloody debut on the network.

“You have to kill me to get me out of there,” Kattar said. “I ain’t gonna take a knee for anybody. Max Holloway is an animal. If you ain’t a Max Holloway fan, you’re a hater. Kid’s a beast, did what he had to do, and good luck to him. Hopefully he’s the champ next, because he deserves another shot.”

Holloway lost a controversial split decision to Alexander Volkanovski in July, but is still considered the best featherweight in UFC history.

He most likely is next in line after an expected title bout between Volkanovski and Ortega in March.

Also on the main card, Carlos Condit defeated Matt Brown by unanimous decision in a welterweight fight. Condit, a 36-year-old former interim welterweight champion, is now 2-0 since a two-year absence that followed a five-fight losing streak.

The fight between the two had been postponed several times in the past decade.

Soriano dropped Todorovic with punches, finally finishing him with less than 15 seconds remaining in the first round after Todorovic’s mouthpiece was knocked loose.

“I was nervous,” said Soriano, 2-0 in the UFC with two first-round knockouts. “My heart just felt like a speaker. I swear I could hear it beating just standing there. It almost hurt, it felt like a side pain in my chest, but I just fought through it. I knew as soon as the cage door closes, I’m going to be at my best no matter what.”