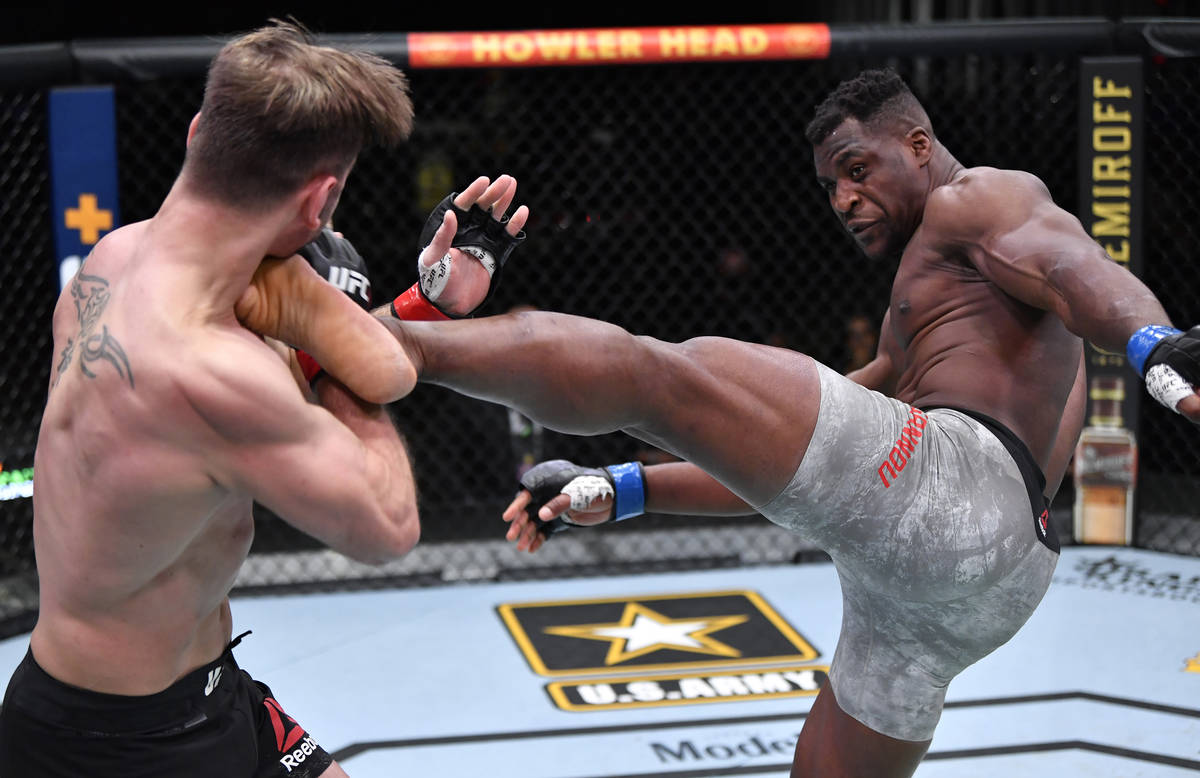 Francis Ngannou of Cameroon kicks Stipe Miocic in their UFC heavyweight championship fight during the UFC 260 event at UFC APEX on March 27, 2021 in Las Vegas. (Photo by Jeff Bottari/Zuffa LLC) 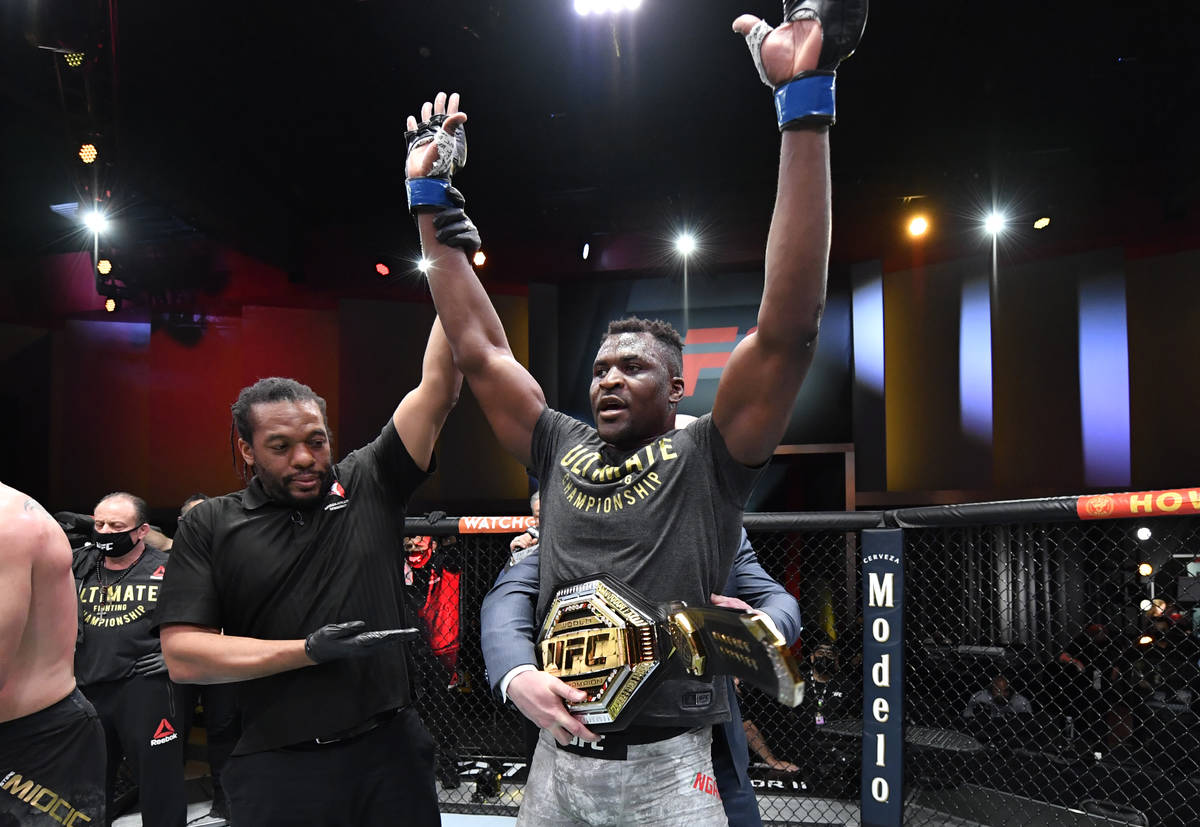 Francis Ngannou of Cameroon reacts after his victory over Stipe Miocic in their UFC heavyweight championship fight during the UFC 260 event at UFC APEX on March 27, 2021 in Las Vegas. (Photo by Jeff Bottari/Zuffa LLC) 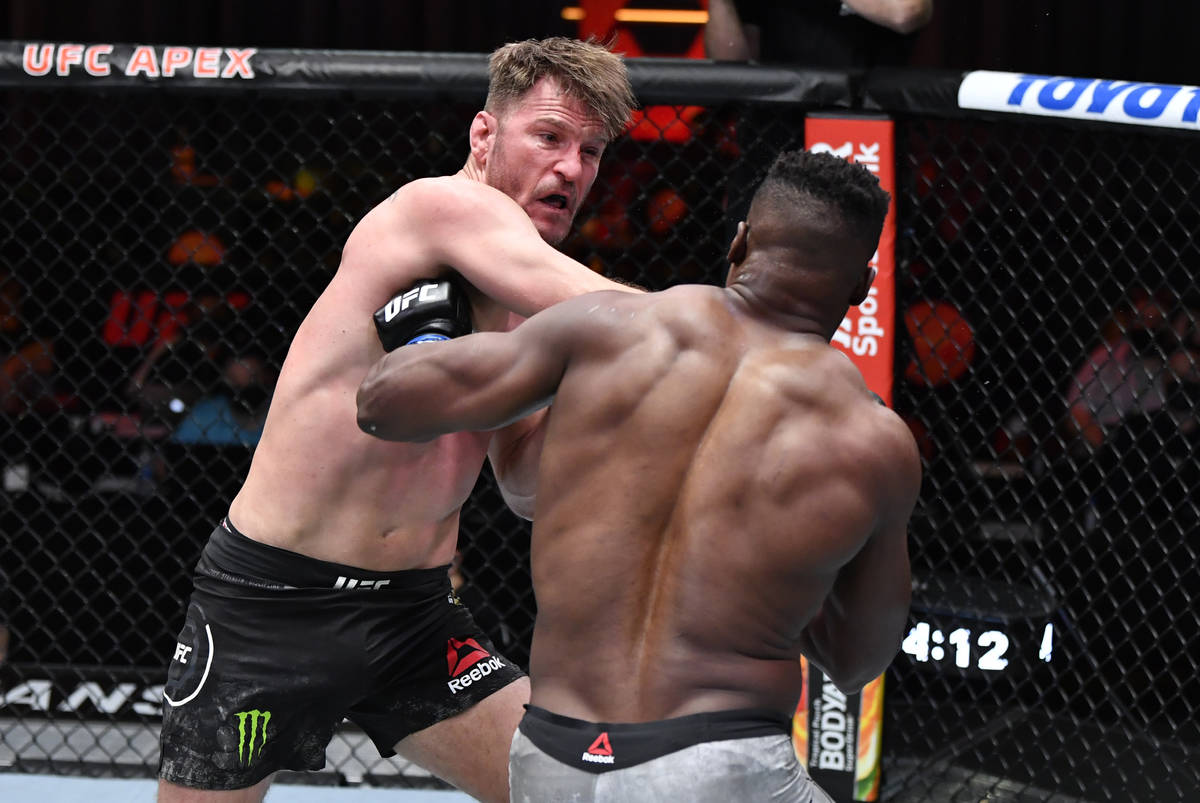 Stipe Miocic punches Francis Ngannou of Cameroon in their UFC heavyweight championship fight during the UFC 260 event at UFC APEX on March 27, 2021 in Las Vegas. (Photo by Jeff Bottari/Zuffa LLC)

Francis Ngannou’s journey to find a better life for his family eventually brought him to Las Vegas.

And it was in his adopted hometown where he achieved the ultimate goal in his sport by winning the UFC heavyweight title with a spectacular second-round knockout of Stipe Miocic on Saturday at UFC 260 at the Apex.

Ngannou, 34, said he’s appreciative of his time in Las Vegas and the other stops along the way.

“Everywhere has been very important to me,” he said. “As a nomad, I have the ability to make everywhere I am look like home. Today, Vegas is home. It’s given me everything you need in a home. But before that Paris was home.”

His journey before that was a treacherous one.

Ngannou left the impoverished remote village of Batie, Cameroon, at age 26 after working in the sand quarry since he was 10. His destination was Paris, but he took a detour to Spain and was jailed for illegally crossing the border by sea after a year of attempts from Morocco.

Ngannou was living on the streets of Paris when he was introduced to MMA in 2013. Five years later, he lost a UFC title fight to Miocic.

On Saturday, he avenged that loss in the main event.

“When the journey is longer, the reward is always more appreciated,” Ngannou said. “I’m sure I would have been happy three years ago, but now there is a different perspective.”

Ngannou had moved to Las Vegas shortly before the first Miocic fight, but truly found a home after settling in with his team at Xtreme Couture.

He’s a regular presence in family social media posts of coach Eric Nicksick, a former football star at Green Valley High School. Ngannou even shouted out the name of Nicksick’s 3-year-old son, Knox, in his postfight interview on the broadcast.

“It’s been an undeniable bond,” Nicksick said. “My kids love him. My wife loves him just as much as I do. It really has become a family.”

Ngannou tried to call his mother after the fight, but he said the communication was difficult because of all the revelers in Batie. Video circulated on social media of the celebration sparked by his win.

The champion said he hopes to put his belt on display permanently in the village as a symbol of what is possible.

“Hopefully, some kids can look at it, and it will inspire them,” he said. “They can understand that somebody can come from where they are to get that and see anything is possible for them if they stay focused and believe in their dream.”

Ngannou thinks the most important message to impart on children who come from circumstances like his is to make sure they know it’s not their fault — and not to blame themselves.

Ngannou hopes his first title defense is against former light heavyweight champion Jon Jones, who is moving up to heavyweight.

The Westgate sportsbook opened Ngannou as a -180 favorite in that potential fight.

Jones and UFC president Dana White already are negotiating the bout through the media.

As for the location, Ngannou has a couple of ideas.