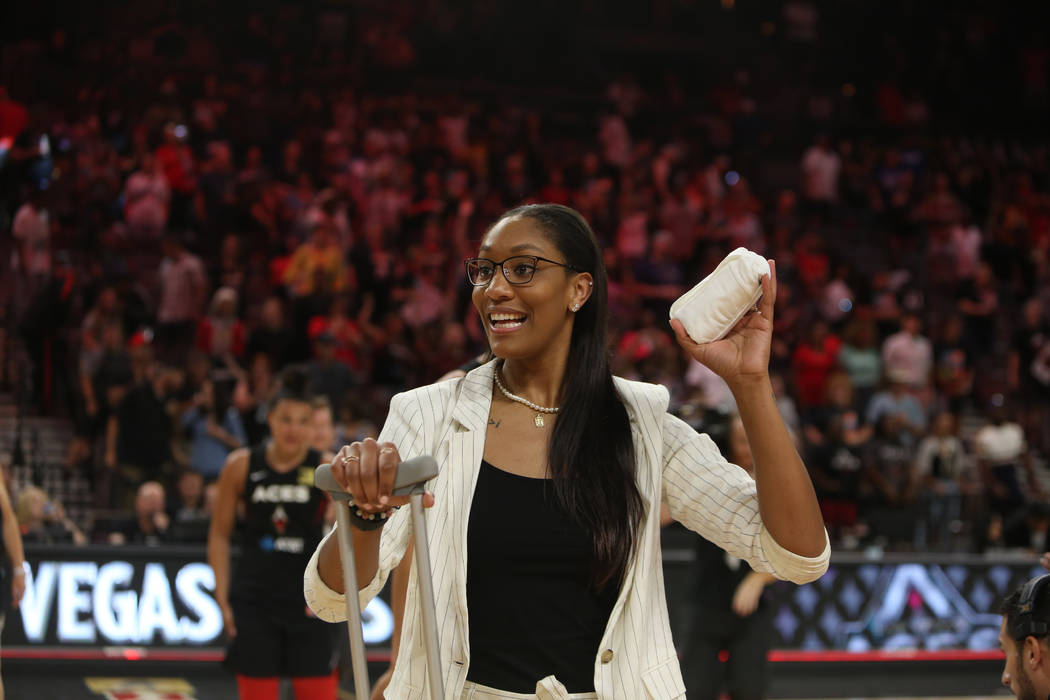 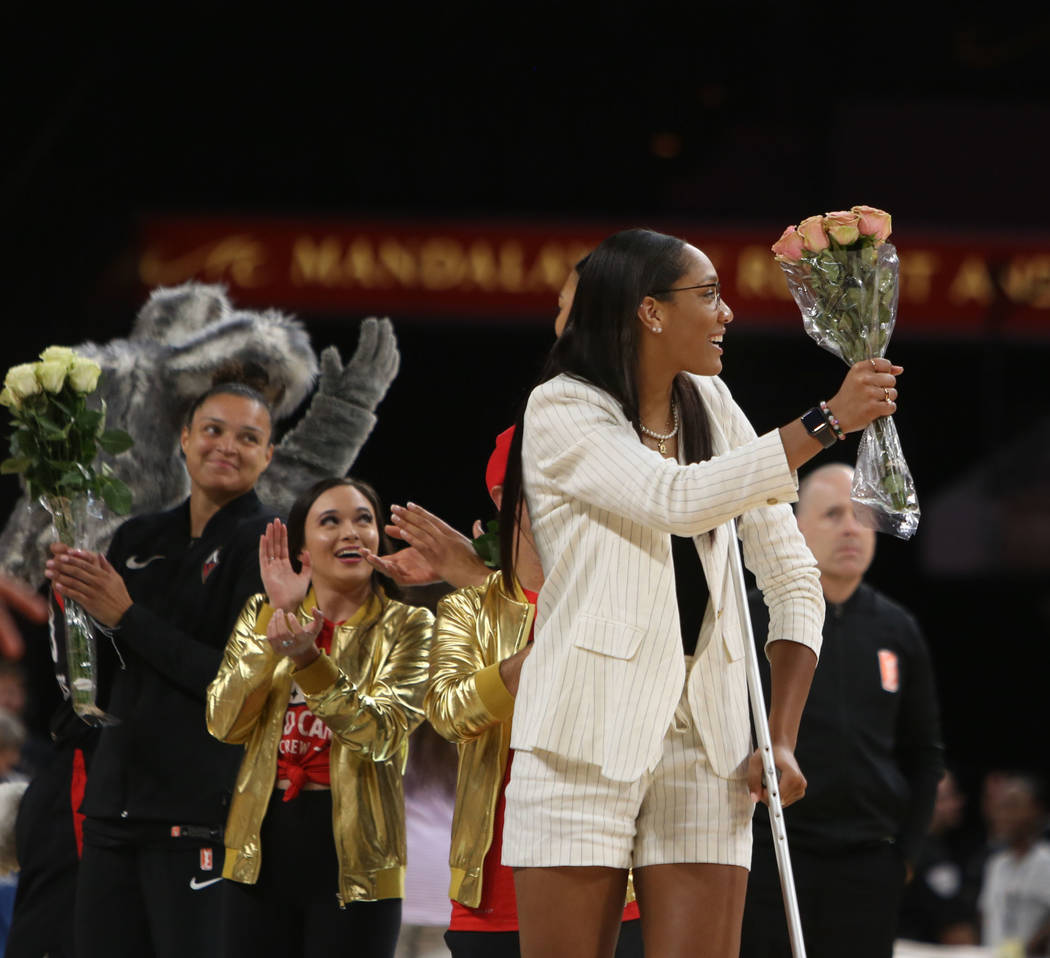 Las Vegas Aces forward A'ja Wilson (22) gets cheered on as she receives flowers for making the WNBA All-Star game before the opening of the WNBA basketball game against the Minnesota Lynx at the Mandalay Bay Events Center in Las Vegas, Sunday, July21, 2019. (Michael Blackshire/Las Vegas Review-Journal ) 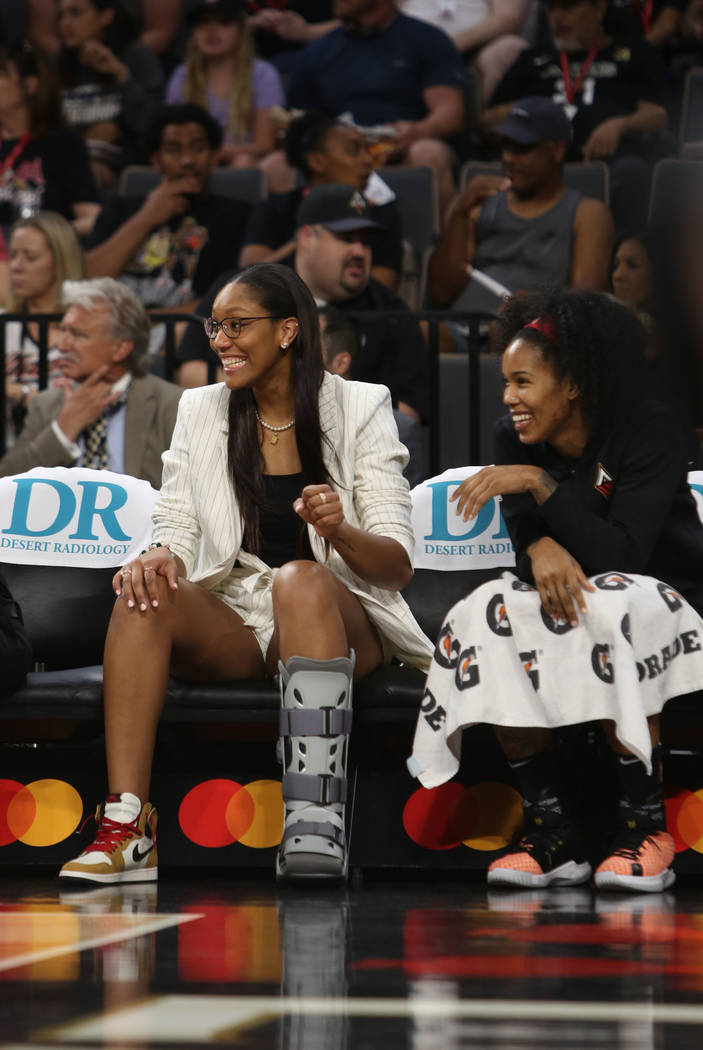 She won’t be playing alongside her fellow All-Stars, though.

Or for the Aces in the immediate future.

Las Vegas is preparing to compete without Wilson — who coach Bill Laimbeer says could miss “weeks” with a sprained ankle — and will adjust its style of play without her presence and production.

Laimbeer said Sunday after a 79-74 win over the Minnesota Lynx that they’ll likely predicate their offense more around ball movement without Wilson, who averages 15.8 points on 12.3 shots, 6.7 rebounds and commands considerable defensive attention as one of the WNBA’s most dominant post players.

The Aces have All-Stars Liz Cambage and Kayla McBride to rely on, though, and both could see an increase in touches and shot attempts without Wilson. Cambage will assume a bulk Wilson’s touches in the post and responded Sunday with 22 points and 13 rebounds.

“Teams are going to have to handle her first and foremost when they play us. And we’ll get more perimeter action,” Laimbeer said. “We’re going to be a movement type of offense now rather than just dominate in the post.”

The Aces on Sunday played through Cambage at various junctures — most notably in the fourth quarter, in which she scored 11 of her 22 points against Minnesota’s rugged interior defense. She scored from both the low and high posts, and took advantage of the additional space created in part by four perimeter players.

McBride also handled the ball more for the Aces and scored 20 points Sunday on 6-of-12 shooting while utilizing dribble hand-offs and ball screens to generate offense for herself and her teammates.

“We just have to work through it,” McBride said Sunday — after her first game without Wilson since the beginning of 2018. “It’s a collective effort for us. That’s what it’s been all year. We just want her to recover and get back with us, but for now everybody (will) step up and do a little bit more.”

Dearica Hamby started for the first time this season Sunday and provided 14 points, seven rebounds and four assists. Laimbeer liked having her as a spark plug off the bench, but was pleased with her performance in relief of Wilson.

“My role is still the same, just more minutes,” said Hamby, who averages 9.8 points and 6.5 rebounds as one of the league’s top reserves. “I play hard, I give energy. I play good defense. I run the floor, and just continue to do that.”