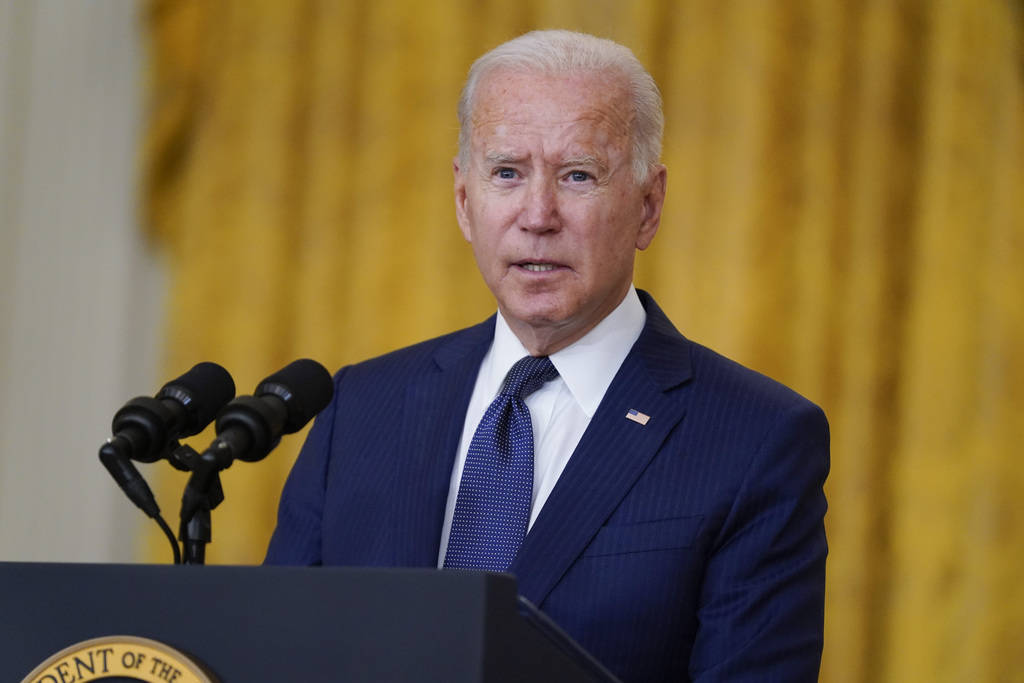 President Joe Biden speaks about the bombings at the Kabul airport that killed at 13 U.S. service members, from the East Room of the White House, Thursday, Aug. 26, 2021, in Washington. (AP Photo/Evan Vucci)

On Tuesday, Biden gave a speech celebrating the departure of American troops from Afghanistan. He didn’t have a “Mission Accomplished” banner behind him, but he acted like he did. It was a bizarre posture to take when you consider the facts on the ground.

Hundreds of Americans are stranded in Afghanistan. One of them is a 3-year-old boy who was born in California, as an ABC TV station reported. He has a U.S. passport. The boy is with his father and other family members who are permanent residents of the U.S.

They tried to get to the Kabul airport, but the Taliban stopped and beat them. At last report, they are on the move, still desperate to escape.

A family of four from Texas is also trying to escape. Despite having U.S. passports, “they couldn’t get past the Taliban,” CNN’s Clarissa Ward reported. But just last week, White House spokeswoman Jen Psaki said, “It’s irresponsible to say Americans are stranded.”

Biden expanded on that line of thinking to engage in blatant victim blaming. “We reached out 19 times” to Americans, telling them to leave Afghanistan, he said. Biden failed to mention what he said in July, “The Taliban overrunning everything and owning the whole country is highly unlikely.”

One doubts the Americans trapped in Afghanistan will make the mistake of believing Biden again — if they survive.

A few hundred — or a few thousand, if earlier estimates were accurate — trapped Americans weren’t going to stop Biden’s braggadocio.

“We completed one of the biggest airlifts in history,” Biden, the man who created the need for the emergency flights, said. You don’t get to crash a car and then brag about pulling people to safety.

“No nation has ever done anything like it in all of history,” he continued. He’s right about that. No nation in history has ever left behind tens of billions of dollars in armaments for the enemy it spent 20 years fighting.

“Ninety percent of Americans in Afghanistan who wanted to leave were able to leave,” he said. That’s a crisis and broken promise.

“If there are American citizens left, we’re going to stay until we get them all out,” he said two weeks ago in an interview with George Stephanopoulos.

This shouldn’t be a partisan point. Biden’s willingness to leave Americans behind is abhorrent. But it’s not just American citizens who are stuck. It’s likely thousands of green card holders are too, with tens of thousands of Afghans who helped the U.S. and their families.

After Biden decided to retreat, the U.S. had a moral obligation to get those people out of the Afghanistan. He seems content with threatening the Taliban with nasty letters if or when they torture and behead our former interpreters. Biden’s abandonment of those Afghans is a deep betrayal and stain on our country’s honor. Shame on him.

Part of the Army’s Warrior Ethos states, “I will never leave a fallen comrade.” If only the commander in chief shared that value.