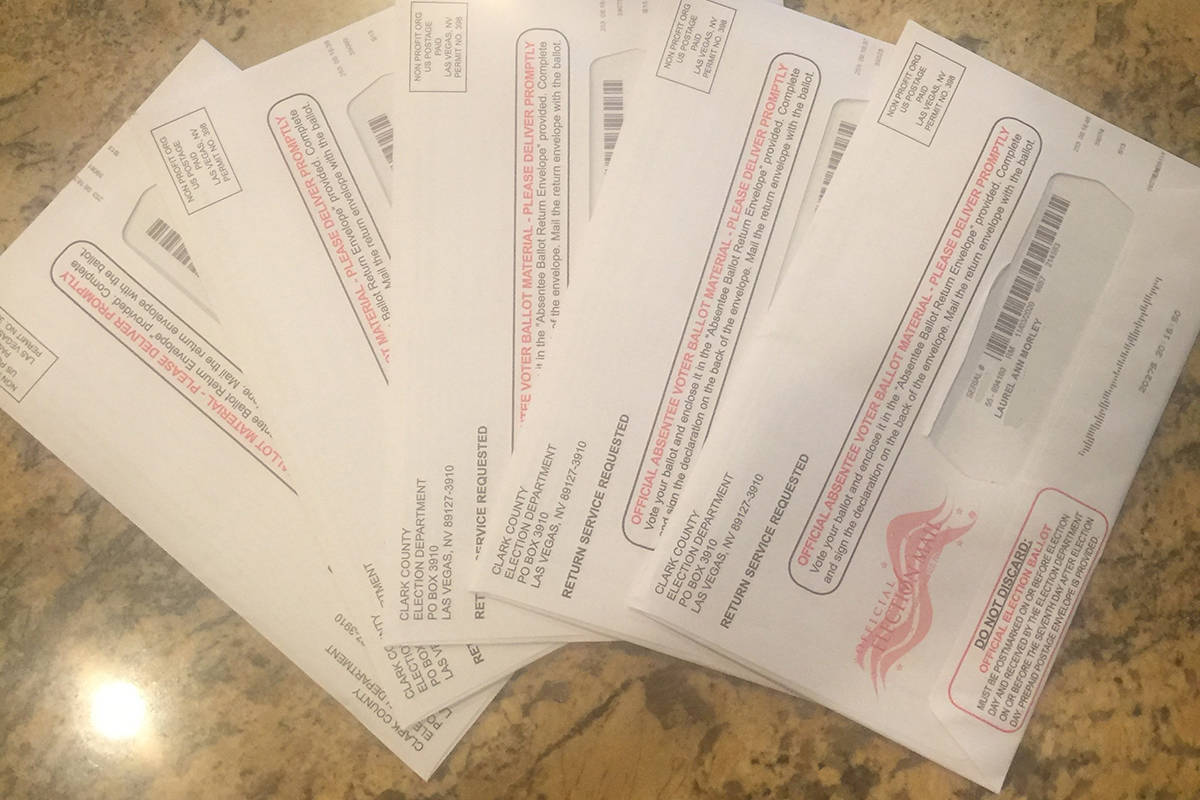 These are the five ballots received by Laurel Morley, who says she only should have received two. Photo taken on Oct. 15, 2020. Courtesy of Laurel Morley. The image has been edited to remove personal information.

Nevada Democrats are rolling out the red carpet to those who want to commit election fraud.

On Tuesday, the Assembly Ways and Means Committee held a hearing on Assembly Bill 321, which is sponsored by Speaker Jason Frierson and Majority Leader Teresa Benitez-Thompson. It would mail ballots to every active, registered voter in Nevada, unless they opt out.

Currently, Nevada has a very permissive system for requesting absentee ballots. If a voter signs up for an absentee ballot, he or she receives one. This provides a small measure of security. You’re more likely to notice if your ballot doesn’t show up. Also, if you’ve moved, you can update your address before requesting your ballot.

Last fall, however, every active voter in Nevada received a mail ballot. Democrats made that change during a special session last summer in response to the pandemic. Under that bill, universal mail ballots were to be used only during an emergency. AB321 would make it standard policy.

To understand what a boon this would be to the dishonest, imagine you wanted to commit election fraud. The first thing you would need is access to multiple ballots. AB321 would provide exactly that. Last year, ballots piled up in apartment trash containers. A reader sent in a photo of ballots found on the street. Other readers sent in photos of ballots they received for people who no longer lived at their address. Others received multiple ballots, because a name change created a new voter registration without eliminating the outdated record.

There are two types of potential fraud here. The first is opportunistic. Someone was sent an extra ballot, and they returned it. The second is more problematic. Someone goes around and collects extra ballots, for instance, from apartment complexes. One could also bribe a postal carrier to steal some undeliverable ballots.

Obtaining ballots illegally will be a lot easier if AB321 passes.

Simply having a ballot isn’t enough, of course. You must be able to return it successfully. If government officials were able to separate legitimate from illegitimate ballots, extra ballots floating about would be less concerning. The best way to do this would be to require that a returned ballot contain a photocopy of someone’s government-issued ID or allow one to submit such paperwork online. Alternatively, voters could write in their driver’s license or government-issued identification number on the return envelope. Those things are unique and tied to a specific voter.

Instead, Nevada relies on signature verification, which is inherently problematic, because people’s signatures change based on writing surfaces, age and other circumstances.

The bill attempts to address this by requiring those examining signatures to take a class on signature verification. That’s something, but it doesn’t matter what they learn in class if the verification standard the law uses is too low. It is in this bill. Officials can’t reject a signature unless it differs in “multiple, significant and obvious respects from the signatures of the voter available in the records of the clerk.”

Nevada used that standard last fall. As a result, Clark County election officials accepted my signature on eight different ballots. For those who don’t remember, the voters copied my version of their signature.

Perhaps then, Nevada election officials vigorously investigate potential fraud because the system is so vulnerable to it. Nope. The Clark County elections team doesn’t include anyone to investigate fraud. The secretary of state’s office identified thousands of voters who used green cards to obtain a driver’s license. It declined to investigate further, because those voters could have subsequently become U.S. citizens. But the whole point of an investigation is to determine who did what, not hypothesize about possible explanations.

About the only thing good in this bill is a requirement that the secretary of state work with the state registrar of vital statistics to weed out dead voters.

There are dishonest actors on both sides of the political aisle. But one gets the impression Nevada Democrats won’t take voter fraud seriously unless Republicans do unexpectedly well in upcoming elections.