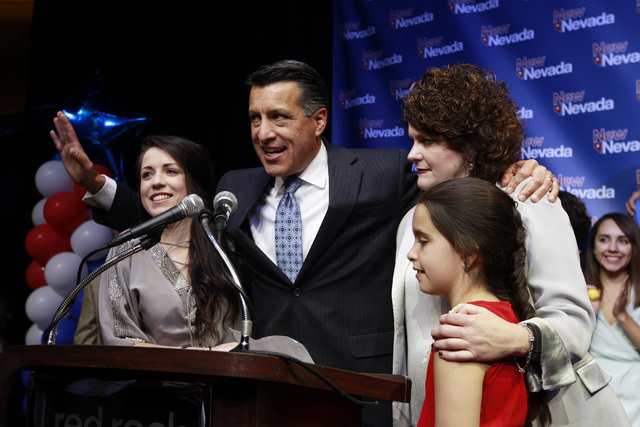 Brian Sandoval and Kathleen Sandoval have officially ended their marriage after more than 27 years, becoming the second straight first family to divorce while in office.

“As we announced at the end of last year, after careful and thoughtful consideration, we have made the difficult decision to divorce. Our divorce has come to an amicable conclusion,” the two said in a joint statement Tuesday. “In consideration of our family, please respect our privacy concerning these matters. This is the last time either of us intend to publicly discuss the matter.”

The Sandovals were college sweethearts and married in 1990.

In December, the governor announced that he and and his wife were separating with plans to divorce, citing strains from life in the public eye.

“Demands of public life are hard on a marriage and ours has been affected in a way neither of us had envisioned or expected,” Brian Sandoval said in December.

Brian Sandoval, 54, was elected governor in 2010 and re-elected in 2014. The Redding, California, native has been a Nevada assemblyman, attorney general and was a federal judge before becoming governor.

Kathleen Sandoval, 52, has worked as operations director at the Children’s Cabinet in Reno, a youth services charity, while her husband has been in office.

State Archivist Jeff Kintop told the Las Vegas Review-Journal in 2012 that Kathleen Sandoval is the only first lady in Nevada history to hold a full-time job while her husband served as governor. Her predecessor, Dawn Gibbons, had owned a wedding chapel and other businesses, but sold them before Jim Gibbons became governor in 2007.

Kathleen Sandoval has supported measures to aid literacy, early childhood education, children’s mental health, food security for children and families, and women’s health. She has advocated for “Breakfast Before the Bell” legislation, which would mandate that schools provide a time and place for students to eat breakfast before the school day and provide free breakfast to needy students.

Brian Sandoval’s predecessor, Jim Gibbons, was the first governor in Nevada history to get divorced while in office.