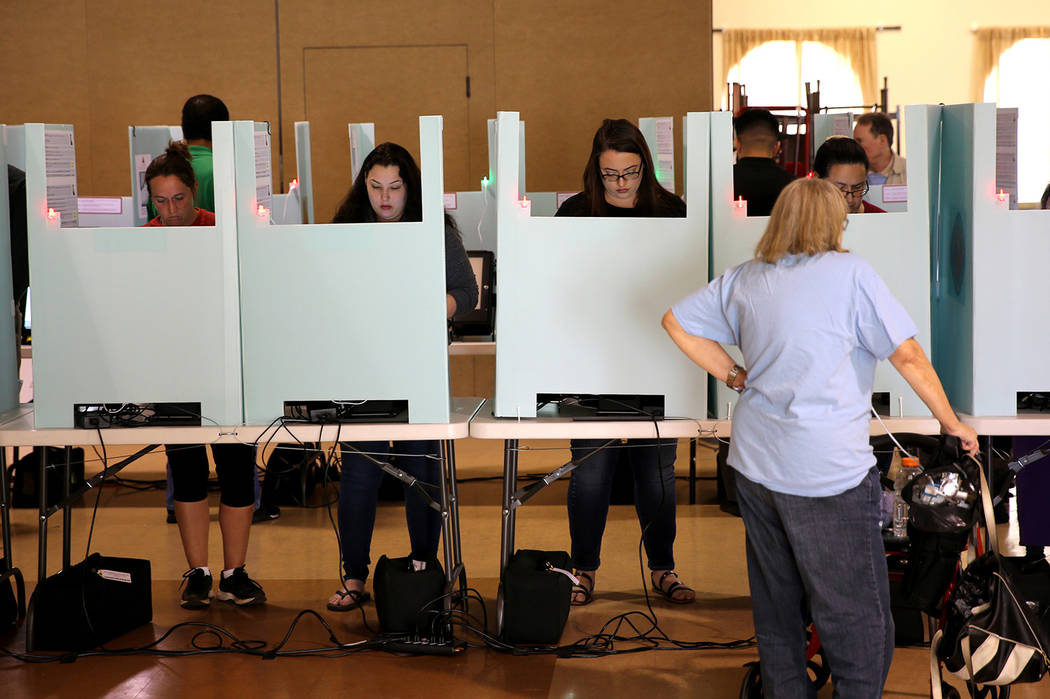 Paltry turnout has prompted the state to take another crack at forcing cities to hold municipal elections in even years.

Voter turnout for municipal elections in Southern Nevada’s three largest cities in 2017 sunk to 10 percent or less, a result of holding elections during odd-numbered years.

North Las Vegas’ turnout was 10.3 percent that year. Henderson’s was 8.2 percent, and Las Vegas hit rock bottom with 7.6 percent. That’s why the Nevada secretary of state’s office is again proposing moving city elections to even-numbered years to align with the state and Clark County.

“We’ve got extremely low turnout at these elections, and this is not an anomaly,” said Wayne Thorley, the deputy secretary of state for elections. “The voters in these cities clearly are not participating in these elections. There would be much higher turnout if they were combined with the county and state elections.”

Mesquite quadrupled its voter turnout while eliminating city costs when it switched to the county election cycle in 2016, said Clark County Registrar of Voters Joe Gloria.

“The numbers indicate it’s much better for the taxpayers,” Gloria said.

Nearly 90,000 people voted for Reno mayor on Nov. 6, according to state data, trouncing the total turnout for the 2015 Las Vegas mayoral election — about 57,000 people.

Assembly Bill 50, drafted by Thorley’s office for the 2019 legislative session, would make it state law to have all elections in even years. A similar bill failed in 2015.

Sondra Cosgrove, president of The League of Women Voters of Nevada, said the group supports the proposed legislation because it would increase voter turnout and eliminate election costs for cities.

“We’re spending more money for lower voter turnout,” she said. “Why would you want to continue to do that? It makes no sense.”

Some cities argue that aligning their elections with the county and state would result in their contests being buried at the bottom of the ballot — and people not paying attention to those races.

“A challenge with moving to a statewide cycle is that municipal candidates could be lost at the bottom of what is already a voluminous ballot and could result in voter fatigue,” said Henderson spokeswoman Kathleen Richards.

But Cosgrove pointed out that even-year elections still have down-ballot contests, such as judges and regents.

North Las Vegas representatives did not say whether the city would oppose the bill. Radke said Las Vegas is reviewing all draft bills, including AB50, though the city previously opposed a similar bill.