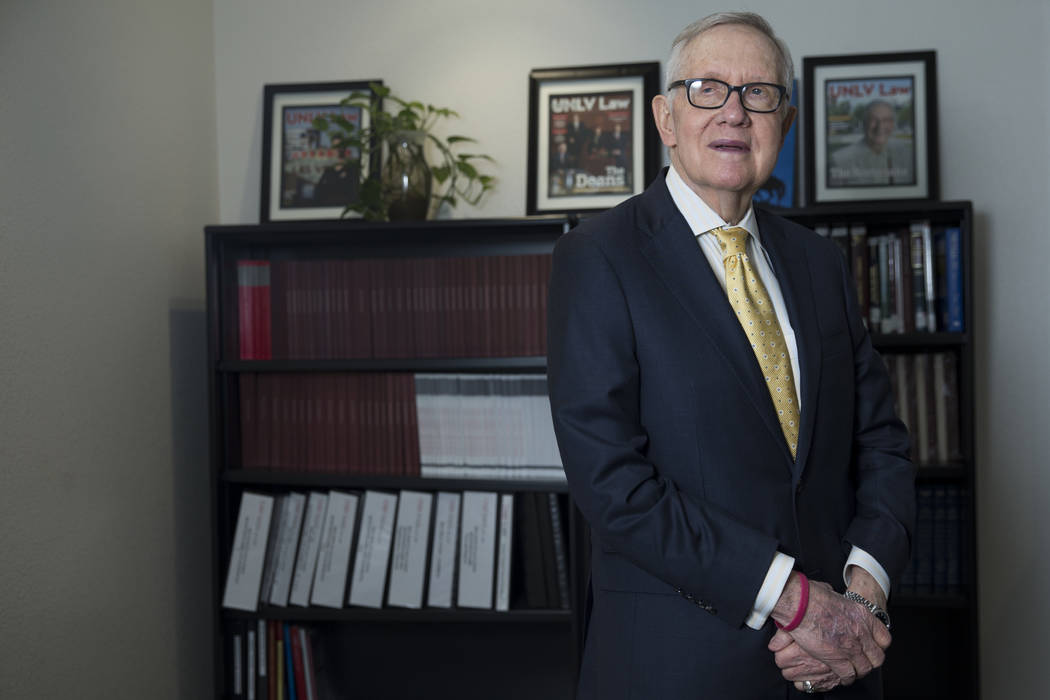 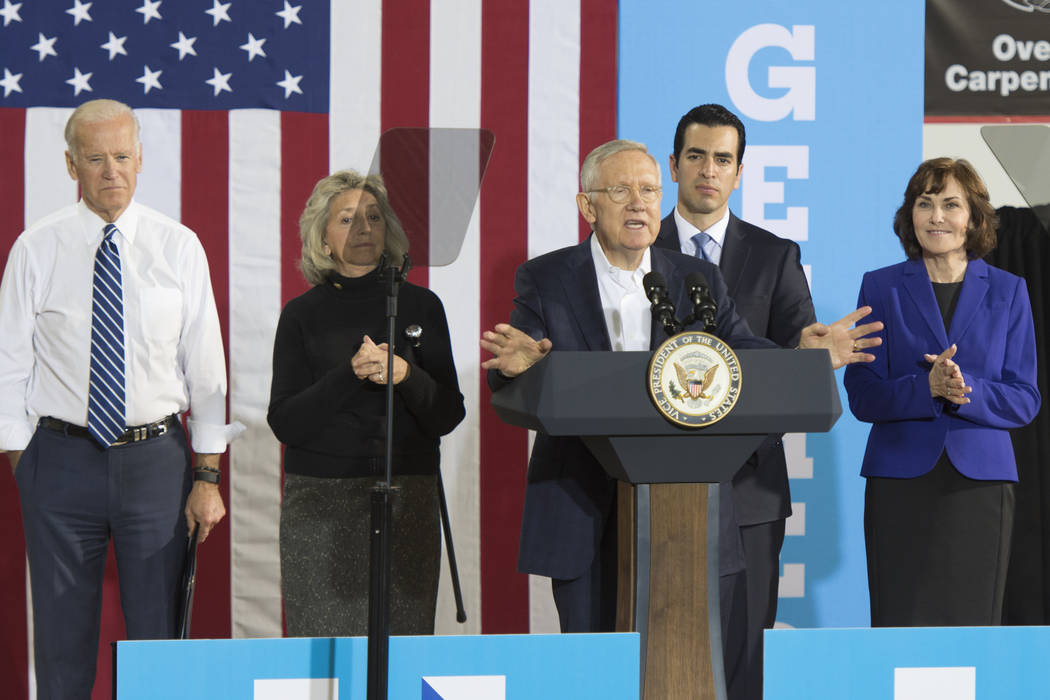 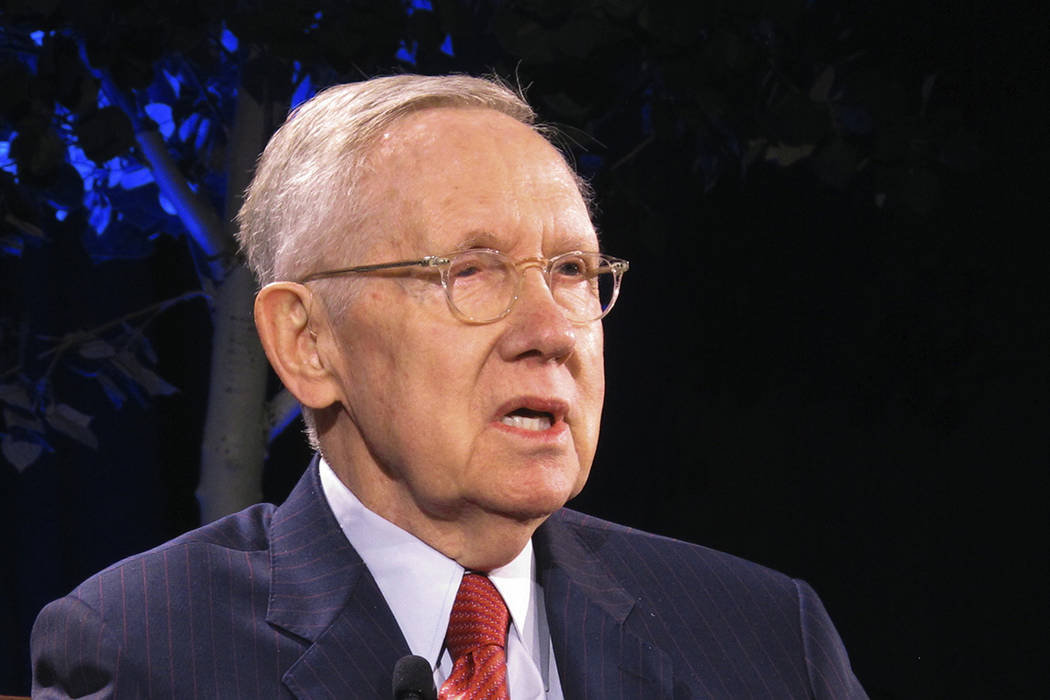 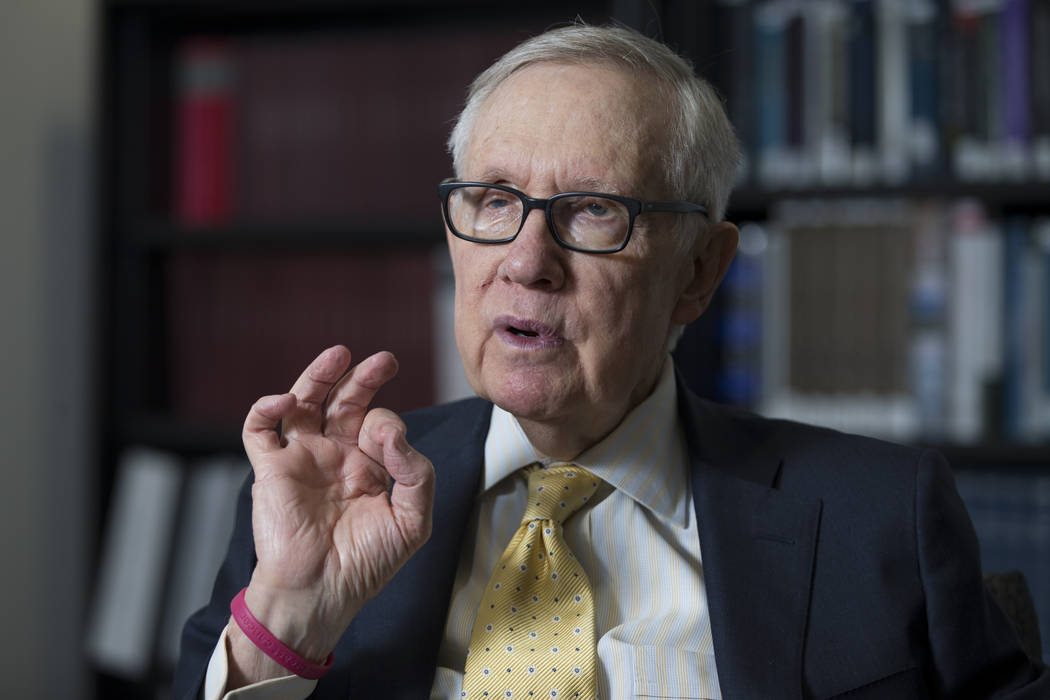 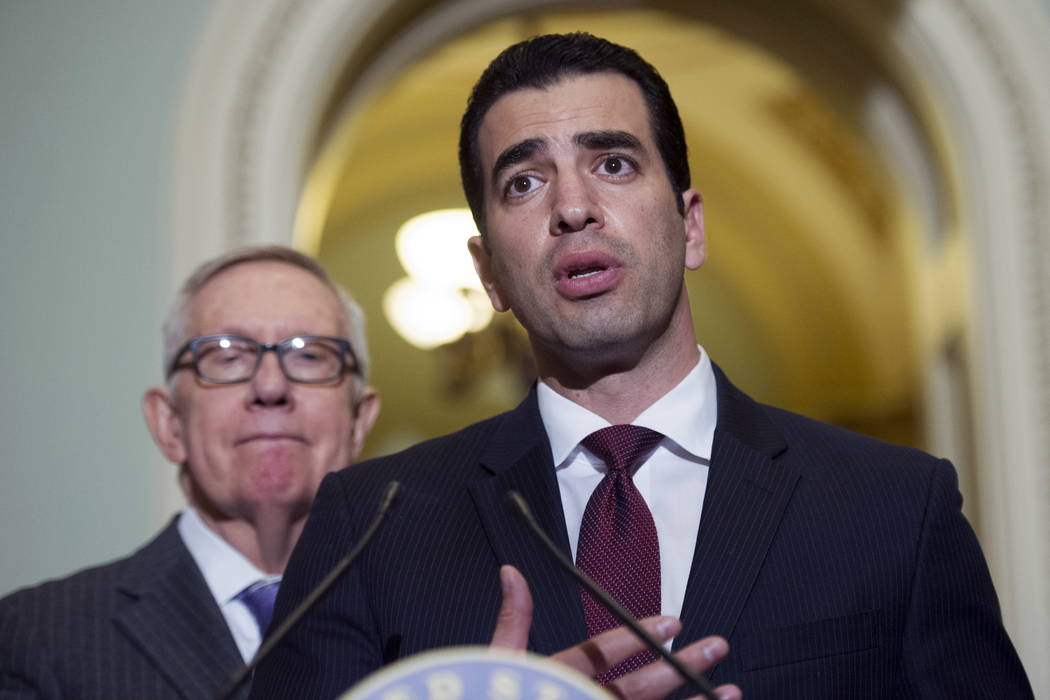 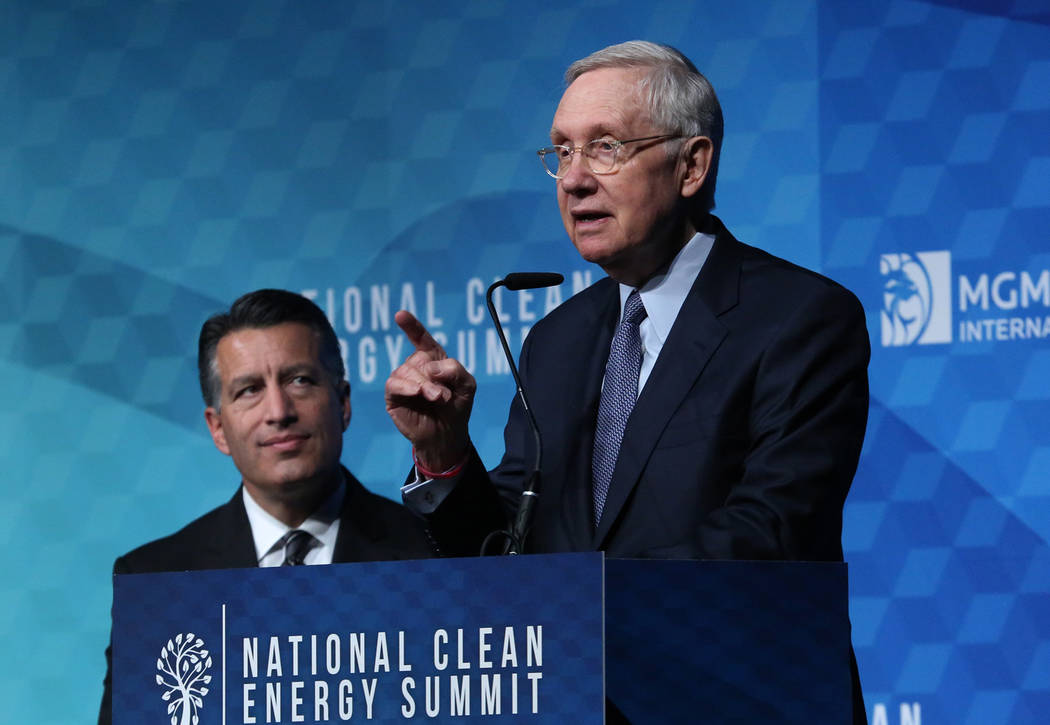 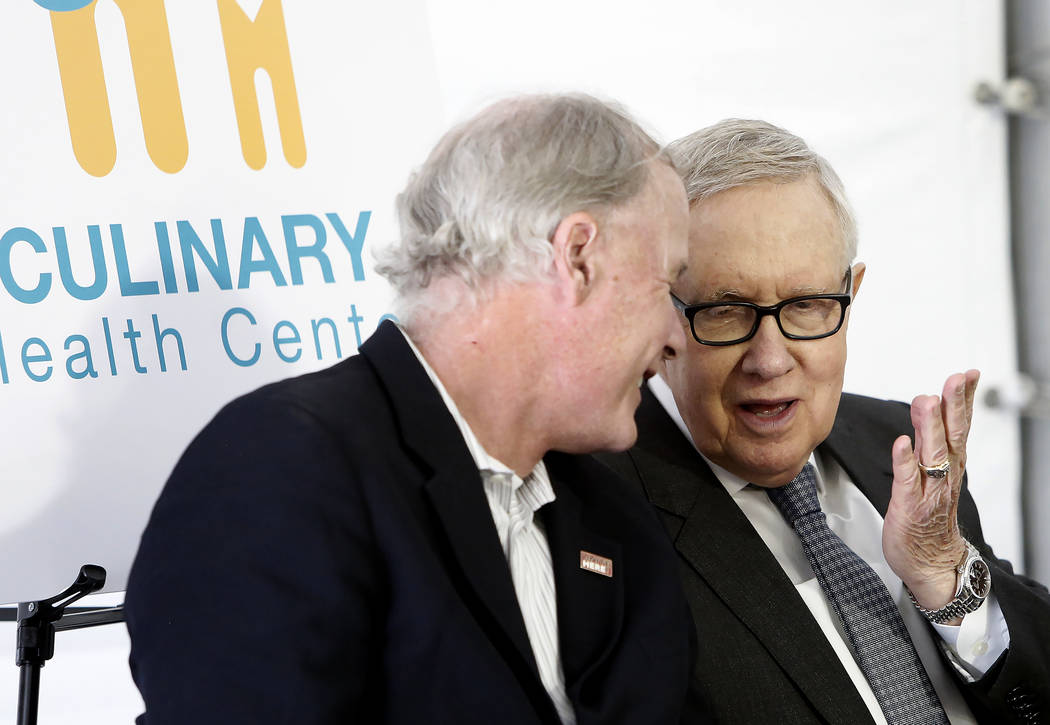 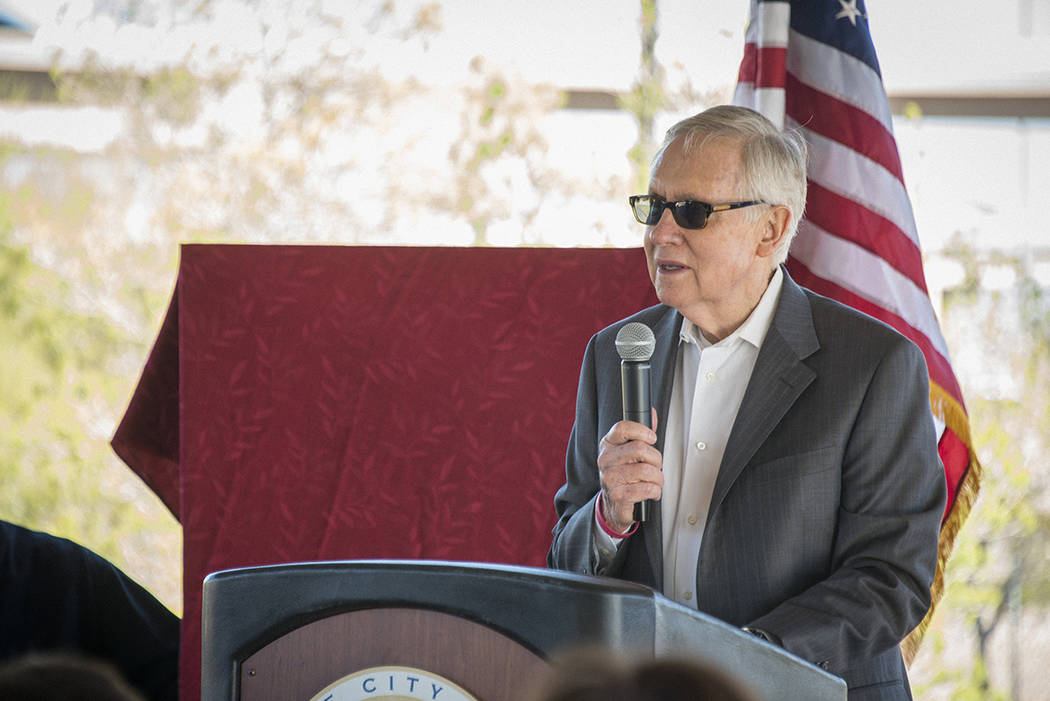 Sen. Harry Reid talks about his connection to the city of Henderson at a ceremony Feb. 22 at Acacia Demonstration Gardens. (Courtesy) 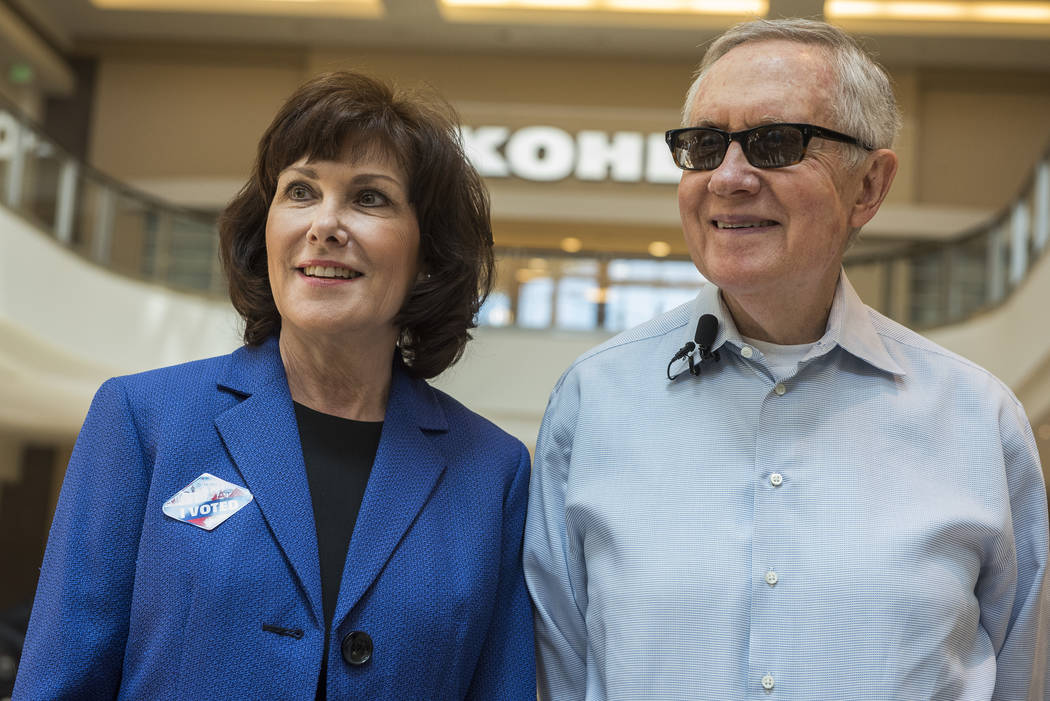 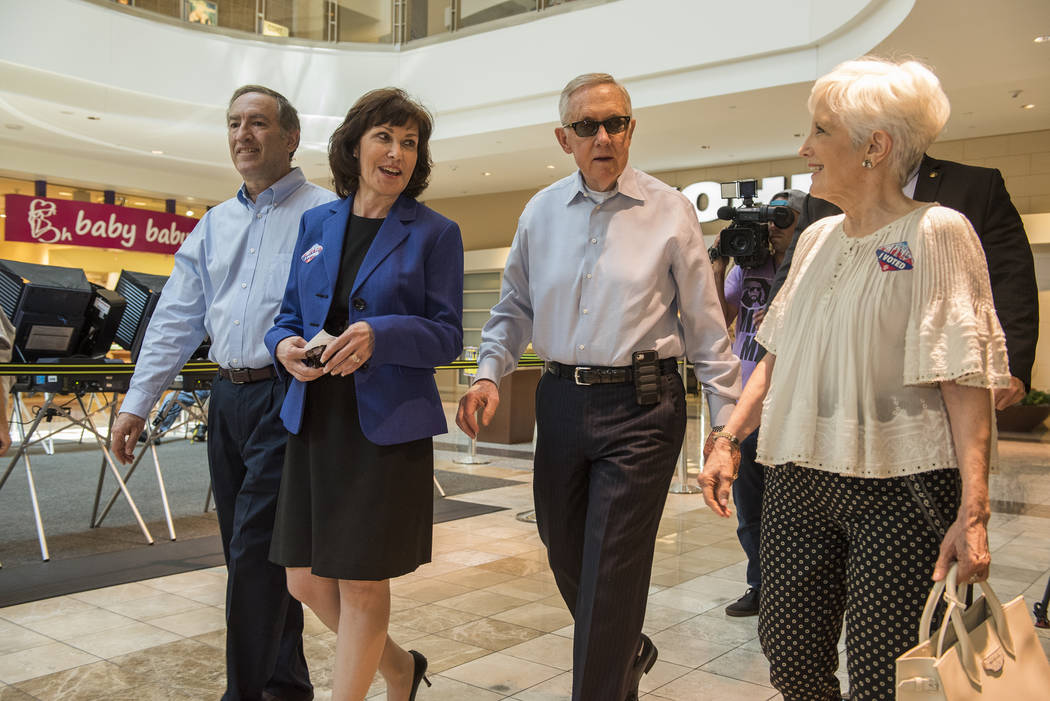 That’s how one Washington lawmaker describes Reid, who despite retiring from the U.S. Senate two years ago remains a formidable political force in Nevada, as well as the mastermind behind a maneuver that unseated a Republican senator and helped Democrats win back the House.

“Everyone who knew Jacky understood what a magnificent person she was,” Reid told the Review-Journal. “She isn’t somebody who was out seeking headlines. She was trying to help her community and the more people looked at her, the more they liked her.”

The gamble paid off.

Reid is the architect who helped build Rosen’s political career. He recruited her to run for Congress two years ago, plucking her from a job as a synagogue president and thrusting her onto the national political stage. Then Reid cleared the way for Rosen’s Senate run by immediately endorsing her and discouraging longtime Rep. Dina Titus from entering the race.

Despite being “retired,” the former Senate leader remains the godfather of Nevada politics, a kingmaker whose name carries significant influence here.

“What Sen. Reid really told me … is know your why. Understand what’s important to you,” Rosen said a few days after unseating Heller. “And he said, ‘You may not think that you’re going to go to Washington and change things. But the work that you’ll do in your state, in your district, for individuals, for businesses large and small, you will make a difference.”

Reid, who is battling pancreatic cancer, also handpicked Steve Sisolak to run for governor. The Clark County commissioner went on to be elected the Silver State’s first Democratic governor in two decades.

“I was very confident he could win that race,” Reid said. “He’d been in Nevada longer than (Adam) Laxalt. Laxalt just moved back to the state and didn’t have a foundation.”

Reid also reportedly tried to clear the way for Sisolak by discouraging Chris Giunchigliani from jumping into the governor’s race. She didn’t listen, and a heated primary fight between the two Democrats ensued.

Rep. Ruben Kihuen credits Reid with jump-starting his political career. The Democratic lawmaker said Reid plays chess while his foes play checkers; he is always one step ahead of the game.

“He is probably the best political strategist that I’ve ever met,” said Kihuen, who did not seek re-election in the wake of a sexual harassment scandal. “He was the architect of what is today the Nevada Democratic Party.”

And the well-tuned “Reid Machine” appears to be just as powerful as ever. Democrats this year swept races up and down the ballot, just like two years ago when Democrats flipped control of the Legislature, voted for Hillary Clinton for president and elected the first Latina to the U.S. Senate, Catherine Cortez Masto.

Reid recruited Cortez Masto to replace him in the Senate, and her experience in the Reid Machine may play a part in the success of Democratic candidates across the nation. On Thursday she was chosen to lead the Democratic Senatorial Campaign Committee.

Kihuen said Reid Machine’s secret sauce is simple, but it’s not easy: register, educate and mobilize. Reid has built an army of organizers from the Democratic Party, advocacy groups and the powerful Culinary Union to register voters, educate them about the candidates and mobilize them to get to the polls. The army works year-round on this strategy.

The Nevada Republican Party hasn’t managed to emulate Reid’s boots-on-the-ground model. Michael McDonald, chairman of the state GOP, could not be reached for comment.

Kihuen met Reid in 1998 when the senator’s campaign recruited high school students as volunteers. Kihuen “needed the extra credit to graduate,” so he raised his hand. The teenager knocked on 500 doors that year. Reid won re-election by a little more than 400 votes.

“It gave me a sense of what kind of impact even a high school student could have,” Kihuen said.

Kihuen, the immigrant son of a farmworker and a housekeeper, went to work for Reid before being elected to the Assembly, then to Congress. Kihuen said he still texts Reid for advice and calls him “the grandfather I never had.”

He believes the Reid Machine will live on in Nevada, which may be shedding its label as a purple state.

“Just knowing Sen. Reid, he will be involved with the party and politics as long as he’s alive,” Kihuen said. “I firmly believe he has been able to build something that will last even after he’s no longer with us.”