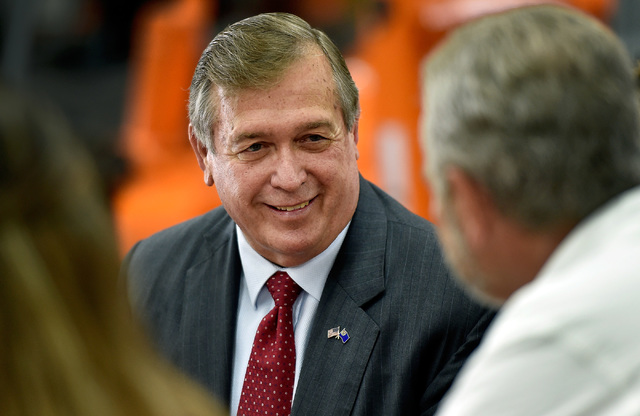 Hardy filed paperwork on Thursday with the Federal Elections Commission declaring his candidacy for 2018 race for Nevada’s 4th Congressional District. Hardy, a Republican, won the seat in 2014 and held it for one term before he was defeated by current Nevada Rep. Ruben Kihuen in 2016.

“After discussion with my family, they’re all behind me to do it. They all support me on it,” Hardy said in a phone interview Thursday.

The filing comes days after Las Vegas City Councilman and Republican candidate Stavros Anthony announced that he was withdrawing from the race, citing health concerns associated with an elevated heart rate.

After Anthony’s announcement on Monday, Hardy issued a statement saying he was discussing the possibility of running with his family.

“I have been heartened by the outpouring of support and encouragement I’ve received from countless Nevadans,” Hardy said in the statement Monday. “In the coming days, I’ll be discussing a potential candidacy with my family and will be making a decision very shortly. This is a critical time for our country, but for America, and for Nevada, no challenge is too great.”

Hardy initially toyed with the idea of running in the adjacent 3rd District, which represents Henderson and southern Clark County, but announced in July that he would not run for any office in 2018.

But circumstances changed when Kihuen announced that he would not seek re-election to the 4th District after several women accused him of sexual harassment in December.

Several Democrats have committed to running to replace Kihuen, including state Sen. Pat Spearman, while others like Horsford and North Las Vegas Mayor John Lee have said they are considering jumping into the race.