To replace it, Senate Democrats introduced a new bill Monday that ties revenue from the tax extension directly to education funding, effectively daring Republicans to vote against school funding to oppose it.

Despite an opinion from legislative lawyers saying otherwise, Republicans maintain that the tax extension is effectively a tax increase that requires a two-thirds majority vote, and hence their support. They have promised legal action if the extension is approved.

“Using children to try and pass a tax increase? Pretty sad,” Senate Minority Leader James Settelmeyer, R-Minden, said as he came off the floor after the bill was introduced.

Dubbed the Safe and Supportive Schools Act, Senate Bill 551 restores $30 million that had been cut from school safety funding. It sends $63 million to programs for underperforming students or those learning English in low-income areas of the state and $4 million to pre-K programs. It also authorizes drawing on a special Clark County public safety sales tax, called the “More Cops” tax, to hire more school safety officers after other law enforcement needs are met.

The bill also includes poison pill language should Republicans challenge the two-thirds requirement in court. A ruling against the tax extension or any other provision of the bill would invalidate it in its entirety.

Senate Democrats framed the bill, introduced with only a digest Monday, as a choice between support for education or a “corporate tax cut.”

Republicans “see no need to address the (payroll tax extension) issue and would rather give corporate tax breaks than talk about funding for education,” said Senate Majority Leader Nicole Cannizzaro, D-Las Vegas. “If we want to know why it is that something like the (extension) is so critical … this says why, because that money goes to education.”

Sen. Ben Kieckhefer, R-Reno, said Democrats are “trying to make us uneasy about voting against something that’s unconstitutional. It’s not gonna work, for me at least.”

The bill is scheduled to be heard Tuesday morning in the Senate Finance Committee.

The gun control legislation, Assembly Bill 291, the Legislature’s main response to the 2017 Las Vegas mass shooting on the Strip, passed the Assembly but has not been heard in the Senate yet. Primarily a ban on bump stocks, devices that can vastly increase the firepower of semiautomatic weapons, the bill has been reworked to remove provisions allowing municipalities to enact local gun laws and add “red-flag” language allowing authorities to seize weapons from potentially violent people.

Additional changes discussed Monday would further address school safety by drawing from another bill to incorporate provisions aimed at curbing violence in schools, including gun violence. The final reworked bill has not been released.

The Legislature, which is set to conclude its 2019 session next Monday, worked a full calendar on Memorial Day. Other actions included a vote on another school funding measure. The Senate unanimously passed Senate Bill 545, which would commit all revenue from the state’s 10 percent marijuana excise tax to education, a $120 million funding boost over the next two years. The measure now goes to the Assembly. 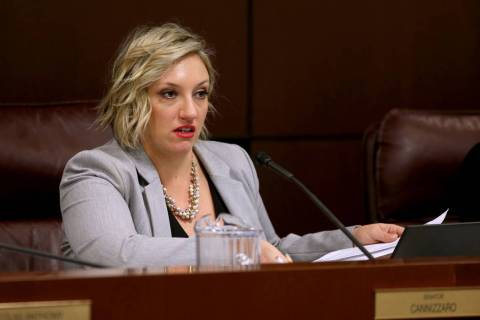