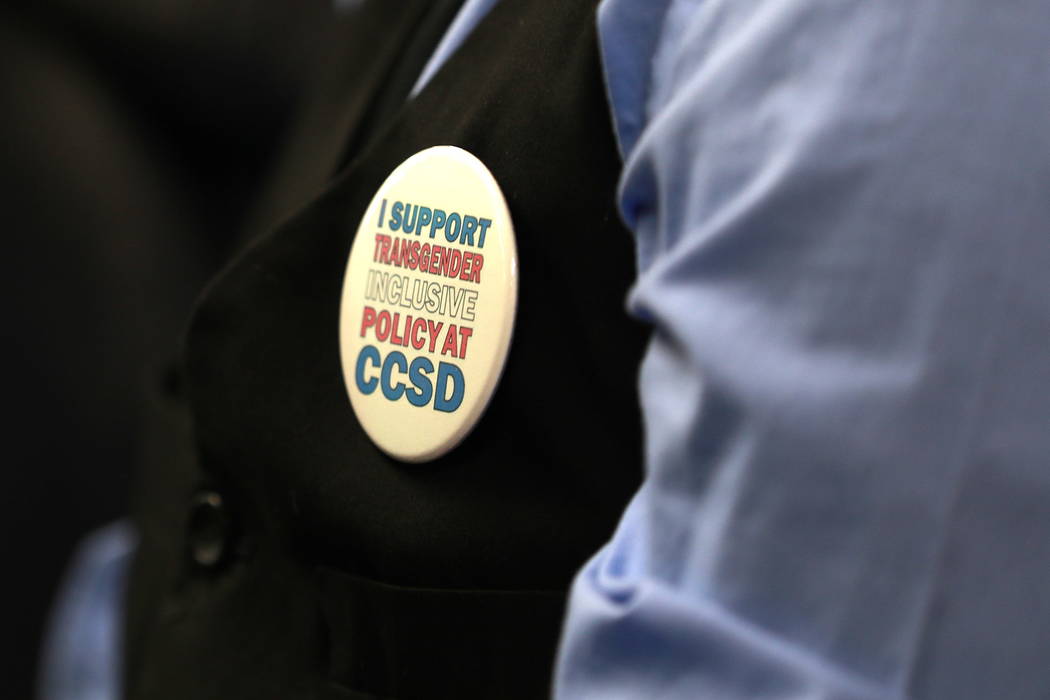 An attendee wears a pin in support of gender-diverse policy during a Clark County School Board meeting, which ended with the board pulling the controversial policy from the agenda, at the Edward Greer building on Flamingo Road in Las Vegas on Thursday, Feb. 22, 2018. Andrea Cornejo Las Vegas Review-Journal @DreaCornejo 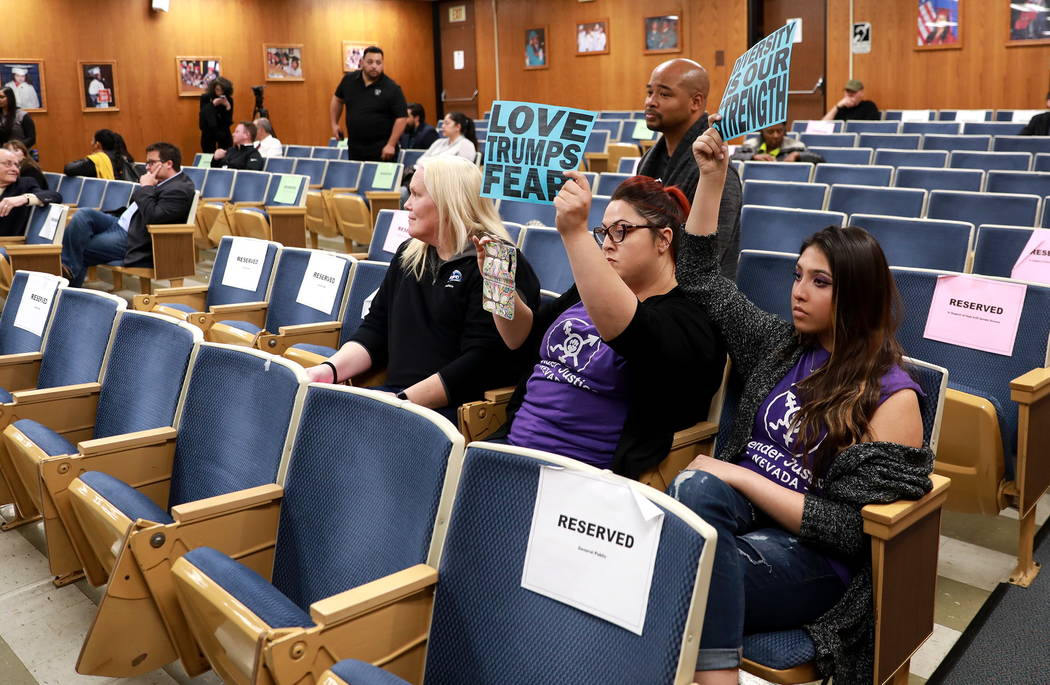 Laura Hernandez, center, and Kristina Hernandez, right, hold their signs up high after the majority of the crowd left following the Clark County School Board's decision to pull a controversial gender-diverse policy from the agenda at the Edward Greer building on Flamingo Road in Las Vegas on Thursday, Feb. 22, 2018. Andrea Cornejo Las Vegas Review-Journal @DreaCornejo 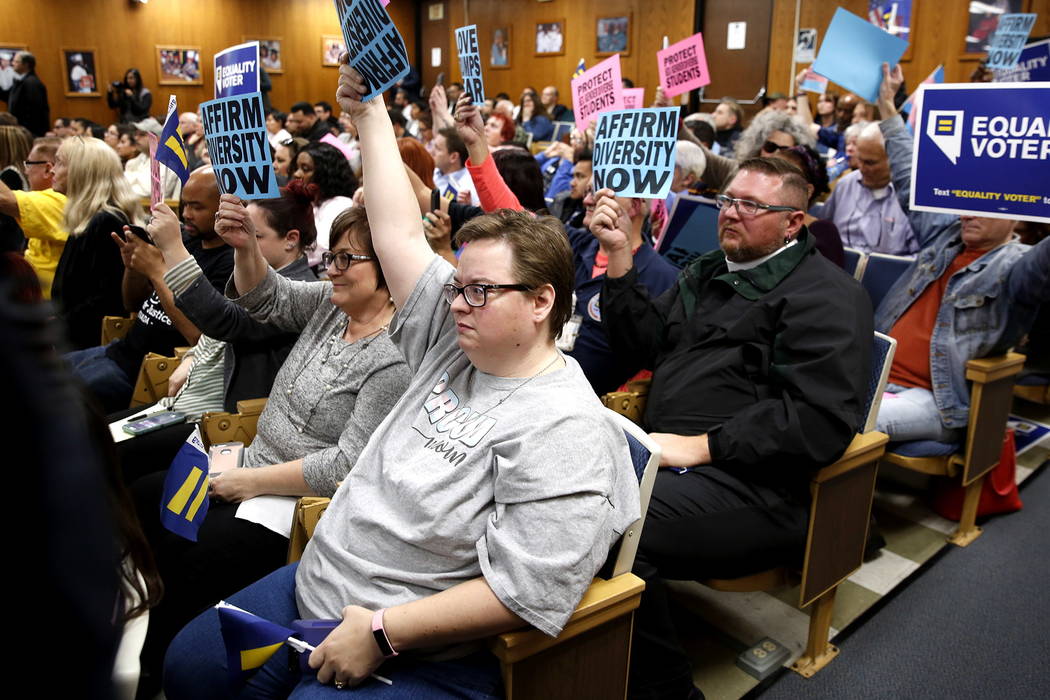 Attendees hold up signs during a Clark County School Board meeting, which ended with the board pulling a controversial gender-diverse policy from the agenda, at the Edward Greer building on Flamingo Road in Las Vegas on Thursday, Feb. 22, 2018. Andrea Cornejo Las Vegas Review-Journal @DreaCornejo

Erin Francom drove an hour each way from Moapa Valley to attend a Clark County School Board meeting about the controversial gender-diverse student policy — twice.

She’s among the throng of parents who have attended public meetings to speak against or for the policy, which would outline how schools address the needs of transgender students. The last meeting was so packed that the board had to reschedule in order to accommodate everyone.

In a district that struggles with parent engagement and operates in a state that’s typically ranked low on public education, that should be a cause for concern. Why are parents turning out in droves for discussions of gender diversity or sex education, as occurred nearly three years ago, but not for meetings on other important topics?

Measuring parental engagement is tough, and there’s no single way to do it. In a public survey the district conducted to gather feedback on its budget deficit, 15,905 of the 26,884 respondents identified themselves as parents.

Depending on your point of view, that could be a good response, though it’s only a fraction of the total number of students.

Francom, a mother who opposes the gender-diverse student policy, isn’t ignorant on other issues. She knows her school’s star status. She’s also aware the district recently struggled with a multimillion-dollar deficit and is searching for a superintendent.

Yet aside from being active in the PTO, she’s only come to meetings on this topic. Why?

“We trust and we expect that school is going to be science, math, English — things of that nature,” she said. “Things that come down to ideology and opinion and ethics and belief and things like that are 100 percent the right and responsibility of the family, of the parents.”

Perhaps it’s because of the direct impact such a policy would have on their child. A superintendent has no direct effect on their son or daughter, but a policy on where to change for gym does.

To be fair, the controversial Achievement School District brought many parents out to meetings and rallies in 2016.

Stephanie Menard, who has a transgender daughter, has a similar knowledge of the district. She had a general idea of the star ratings for her children’s schools and was aware of the superintendent search and the deficit.

But like Francom, she hasn’t attended any meetings apart from the ones on the gender-diverse student policy.

“For me, it’s more of a concern on her behalf, because I’ve seen a lot of the administration just not really knowing what to do in certain circumstances,” she said.

She said the spread of misinformation by the opposing side also causes fear that brings out the crowds.

Karen Mapp, a senior lecturer on education at Harvard University who focuses on parent engagement, said there’s no simple reason for the disparity in parent turnout. But engaging families takes more than just having public meetings with microphones and two minutes to speak, she noted.

“I always find it astounding that someone expects families to just show up to these meetings and there’s no attempt to collaborate with them on anything else,” Mapp said.

The district does have a Family and Community Engagement Services Department, and the Public Education Foundation has a family learning program at certain schools that’s been around for a decade. Maybe those initiatives help.

In the meantime, if you plan on attending the next meeting on the gender-diverse student policy March 22, get there early.