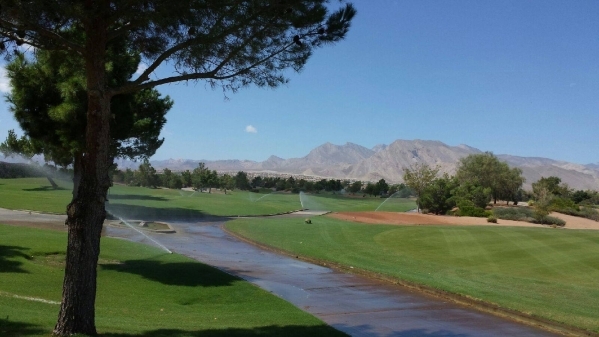 Let’s get the essentials out of the way. The day of golf started at 8 a.m.

The cold hit me while I was unloading my clubs. It was early, and my two cups of hot coffee were just distant memories. Wow, it was cold.

Durango Hills Golf Club, 3501 N. Durango Drive, is owned by the city of Las Vegas and managed by OB Sports. I haven’t played there in a decade, so it was the perfect course for a frigid day. Durango Hills is a par-58, 3,777-yard executive course that can be played in less than three hours, lessening the risk of frostbite.

Lee Schmidt and Brian Curley designed the course and opened it for play in November 2002. The duo have built more than 100 courses in 24 countries and are also responsible for 10 of the 12 courses at the world’s largest golf complex, the fabled Mission Hills Shenzhen in China. Locally, they were the design force behind Bali Hai Golf Club adjacent to the strip in 2000.

Durango Hills consists of 14 par-3 holes ranging from 136 yards to 218 yards. The four par-4 holes range in distance from 324 yards to 400 yards. Having not played the course in quite some time, I headed for the first tee. Wrong. Play now starts on what was hole No. 10. That means that three of the par 4s now play in the home nine.

Normally, I don’t mind playing in the wind, as the breeze, more often than not, blows my shots back onto the fairways. Not that day. That included the No. 1 handicap hole, No. 2, which is a 203-yard that requires almost that much in carry. A large trap guards the front, and anything short will test your sand skills. It’s about that time that you notice the condition of the traps. They might be better described as “rock and pebble” hazards. They are hardscrabble and one really can’t “blast” out of them.

It wasn’t until the fifth hole that I landed on the green of a 171-yard straight away. The course superintendent must not have been in the holiday spirit. The greens are naturally fast, and he cut several holes smack dab in the middle of pretty severe breaks.

Most of the holes have pretty wide-open fairways, but hole No. 9 requires a center of the green shot. It’s a 154-yard, narrow fairway with trees and a trap to the left of the green. To the right, there’s a water hazard and trap waiting for errant shots.

What made this hole particularly interesting was the flock of geese residing on the green. Having successfully scattered the gathering with spectacular tee shots, another surprise confronted us: There was an abundance of geese droppings on the green, and all four putts were affected.

Hole No. 10 shares the water hazard with No. 9 and again requires a testing tee shot. The green is guarded by two traps, front left and behind. The water extends fully down the right, and the putting surface is only a few paces from the hazard. It carries a little longer carry at 175 yards.

Another fun hole is the 136-yard 13th. From a very narrow fairway, there is OB to the left. The fun part is the green is entirely surrounded by a huge sand trap and another smaller one thrown in for good measure. Missing to the right, you’re in desert tundra and in the middle of a grove of trees. Not an easy approach.

Also entertaining is that all par-4s on the back have wide-open fairways, so go ahead and bomb away. It feels so good after so many par-3 challenges.

All in all, it was a pleasurable 165 minutes of golf. The 19th was enjoyable as well. Beverages were fairly priced, but mainly, it was warm. I’d play again.

— John Asay is a longtime golfer and local freelance writer.