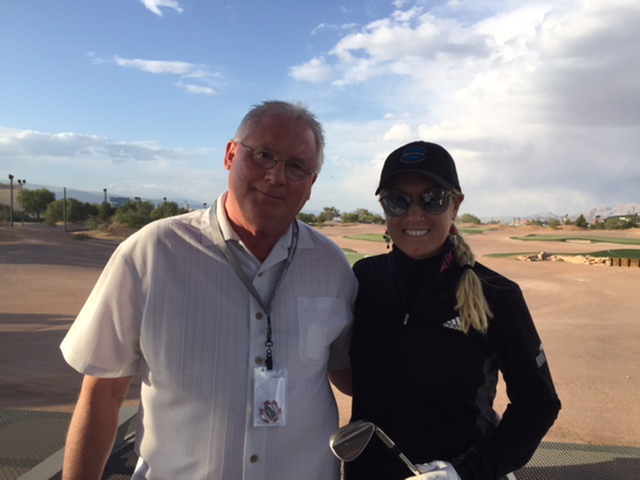 Maybe it was too far away; maybe my schedule was too busy. Probably it was the fact that my golf swing is already close to perfect. Whatever, it’s been quite a while since I’ve been to the Callaway Golf Experience on Las Vegas Boulevard South. A lot has transpired. It’s now the TaylorMade Golf Experience. In November 2013, the owners and brothers, John and Ron Boreta, didn’t renew their agreement with Callaway Golf, which cleared the way for the relationship with TaylorMade.

Since then, the 42-acre golf complex has increased to more than 45,000 feet of retail space and installed additional instructional hitting bays. It’s really a golfer’s paradise for retail golf stuff and top-rated golf coaching. The lighted par-3 course, the 113-bay driving range and the popular restaurant are still there.

But the big news arrived in the form of an invite.

It was to attend the debut of TaylorMade’s new training facility, The Flight Deck. The Flight Deck is the only place in Las Vegas to experience a PGA tour-like club-fitting process similar to what professionals have access to. The Flight Deck’s Flightscope Launch equipment captures club head and ball speed, spin rate, launch angle and other critical data in an outdoor environment. Then a world-class TaylorMade Golf Master Swing technician matches your swing data and custom builds the clubs while you wait, play a round or have lunch. Viola. Your new custom clubs are finished and ready for play. Talk about convenient.

The main attraction of the evening was an appearance by LPGA professional and Las Vegas resident Natalie Gulbis. Natalie is one of the most popular female golfers in the United States. She was the youngest golfer to qualify for a LPGA event in 1997 at the age of 14. She attended the University of Arizona for a year before turning pro in 2002. In 2005, Natalie was the first LPGA golfer to win more than a million a year without a tour victory. In 2006, she joined Lorena Ochoa as the only players to finish in the top 20 in all four major championships. She has earned her way onto three U.S. Solheim Cup teams. In 2007, she won the Rolex Evian Masters tournament for her only LPGA win. (Injuries have hampered her play too often.)

She has endorsed numerous products, including Canon, Michelob Ultra, accounting firm McGaldrey LLC, MasterCard and her current home in Lake Las Vegas. And many more.

She appeared on NBC’s “Celebrity Apprentice.” She had her own reality show, “The Natalie Gulbis Show,” on the Golf Channel.

She founded the Natalie Gulbis Foundation to give back to the community.

Watching her whack some practice shots and at the same time interacting with the crowd says a lot about her. She’s here to host a blackjack golf tournament for the fun of the media. She’s in front of the new Flight Deck trailer and hitting some practice shots. The greens on the range have been sectioned off into different playing cards. The guests can challenge Natalie by hitting shots and scoring the best blackjack hands. She’s laughing and thoroughly having a good time. Everybody wants a crack at her.

She laughs some more. Seems like she is just one of your golfing buddies.

I manage to ask her one question: “What’s your main priority playing these days?”

She answers immediately: “To win tournaments. I’m on the road the next five weeks playing. Be nice to win one.”

We’ll be rooting for you.