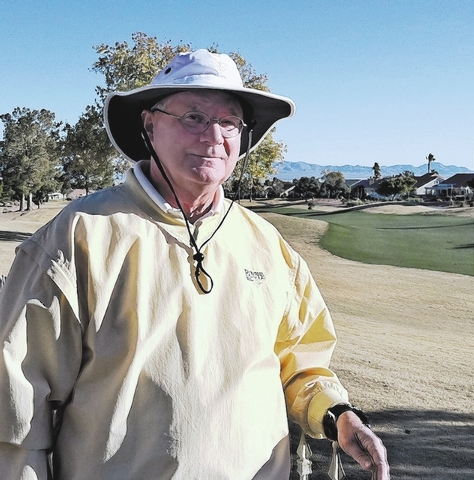 Thanks, everyone. Just a brief follow-up to last month’s column on skin cancer. From it, I learned five things:

1. People care. I got many notes wishing me good luck and offering advice. Well-received advice. Josette Brink out at Desert Willow Golf course thanked me for sharing my experience and warned me to follow the eight points the PGA recommends for sun protection.

2. Reader Mary Duensing offered advice on two fronts. She suggested Bass Pro Shops, REI or Tilley’s for a good choice of hat wear. Mary, are you sure it will make me look jaunty? (See the picture; you decide.) She also suggested Paula’s Choice sun products. She added, “Women already are way ahead on searching for sunscreens that do not feel oily or greasy on the skin.”

3. Sun protection awareness has a larger profile then I thought. Mark Wishner, founder of the Sun SafeTee Program, offered support and advice to golfers on how to protect themselves in the sun. Check out sunsafetee.org for more info.

4. This cursed malady strikes without warning. A friend, with less visible symptoms than I, has just been diagnosed with melanoma. The best to him.

5. Finally, this is not going to be a walk in the park financially. So far, the accumulated bills total more than $23,000. Hope my insurance is equal to the task. I could have gotten an often-suggested full face-lift for $23,000.

A look at golf records

When the weather is cold and rainy, what else to do but chill at the 19th hole and engage in a group discussion?

The topic of sports records came up, and not one of us could name a golf record other than Jack Nicklaus’ 18 majors. Plenty of us could name records in baseball. Cy Young’s 511 wins, Joe DiMaggio’s 56-game hitting streak, Pete Rose’s hits record of 4,256 and Cal Ripken’s 2,632 consecutive games played. Football has several, including Emmitt Smith’s 18,355 rushing yards and Jerry Rice’s 22,895 receiving yards. Basketball? How about the Bulls’ 72-10 record in the 1995-96 season?

We pondered, “Will these ever be topped? What’s the record that will never be broken?” My guess later.

But golf? Can anybody name the golfer with the most PGA wins? I thought not. There are not many statistics in the world of golf, especially the once-in-a-lifetime hole-in-one.

That is, not until an email from Doug Bunkerk of the National Hole in One Association. This association has an unreal record of keeping track of hole-in-one statistics. And it’s backed by 32 years providing hole-in-one insurance at more than 300,000 golf tournaments. What’s nifty about the association is that it contains both professional and amateur achievements. So, if you ever wondered about holes in one, I have the answers.

The website begins with this disclaimer: “The actual odds of making a Hole-in-One depend on your skill and the difficulty of the hole, but luck can beat these odds.” Really? Gosh, thanks.

Record for most aces: Pro golfer Mancil Davis, known as King of Aces, has 51 career aces, a world record of 10 double eagles, eight aces in a single year.

Gee, do you think luck ever entered the picture regarding most of these? No, all skill level.

Now you are prepared for free drinks when playing golf trivia. Have one on me.

By the way, the sports record I believe will never be broken? The record now is two: Johnny Vander Meer’s consecutive no-hitters in June 1938.

Make sure you have a joyous holiday season.