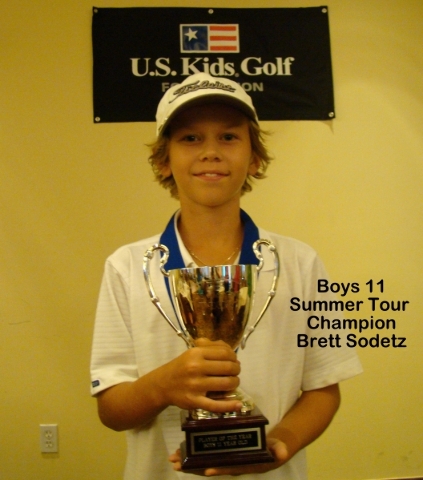 Brett Sodetz of Henderson won his age group at the U.S. Kids Golf world championship at Pinehurst, N.C., at the age of 6 in 2008. He played nine holes each day, par-27, 1,300 yards and shot 7 under. Brett is still winning tournaments now at age of 12. (Special to View)

Alright, parents: Listen up. You may be thinking of introducing your son or daughter to the game of golf, but how to do it? Perhaps your son or daughter has been playing golf for a number of years. In fact, that young golfer may be better than you are now. What next, you ask?

Here’s what to do.

Dan Van Horn loves golf. He had two kids. In 1996, he founded U.S. Kids Golf as a solution to a problem he was experiencing when introducing his children, ages 5 and 8, to the game of golf. “They weren’t having fun,” he said. He soon realized that the cutoff clubs and junior clubs his kids were using were far too heavy. So he developed a line of ultra-light kids clubs, designed to fit a kid properly and to be 25 percent lighter.

It worked. So he started U.S. Kids Golf, a company focusing on youth golf clubs. Today, he offers nine sizes of clubs based mainly on the height of the young players.

“The mission of U.S. Kids Golf is to help kids have fun learning the lifelong game of golf and to encourage family interaction that builds lasting memories,” Dan’s mission statement says.

That worked, too. In addition to providing the right equipment, Dan saw the need for improved programs, coaching and opportunities for competition that other organized youth sports offered. Thus, the U.S. Kids Golf Foundation was formed in 2000.

So, you can say the rest is history. But that history is staggering: 15 years later, U.S. Kids Golf is in 50-plus U.S. markets and 40 countries in the European market, offering equipment, guidance, golf instruction and tournament play.

I asked Paul how the tournament system works.

“We have three tours a year: the spring tour, the summer tour and the fall tour. Each tour has eight tournaments,” Paul said. “We have eight age divisions for the boys, 6 years old and under, one each for ages 7 to 12, and a combined 13- to 14-year-old group. For the girls, we have four age divisions, age 7 and under, ages 8 and 9, ages 10 to 11 and ages 12 to 14. Each age division competes in every tournament. So that can be as many 24 rounds of competitive golf.”

I asked Paul what kind of yardage these kids play and how many holes.

Is your mind numbing up yet?

My final question was if any young golfer can play on the tour. Paul gave me a short answer: “If a parent has any doubt if his child is ready for the tour, just call me, Paul Brown, PGA professional, at 702-883-9197.”

So how much to participate? The membership fee for all local tours is $40 per player per season. The cost to register for one tournament is approximately $37 for nine holes and $47 for 18 holes.

— John Asay is a longtime golfer and local freelance writer. Contact him at jasay@reviewjournal.com.