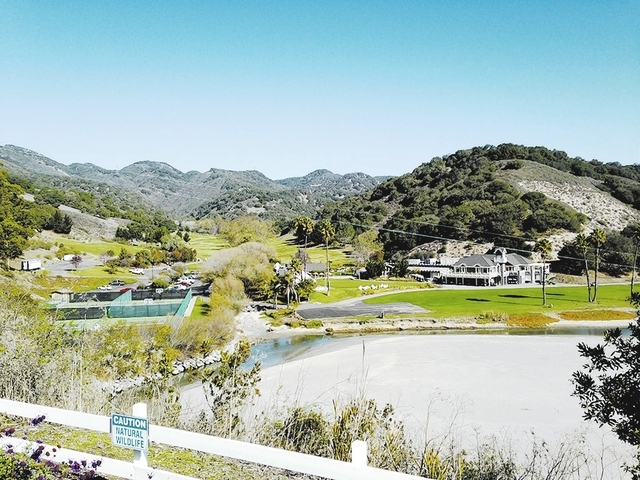 Avila Beach Golf Resort is seen in this undated photo.

Always write to the most common denominator. General interest, appeal to the masses. That’s what I was told when I started this writing gig.

Never focus on the least common denominator. After all, “You’re not a columnist for Scientific American.”

So I’m breaking the rules. This is targeted toward folks who grew up in California, along the coast, more specifically the Central Coast, like Avila Beach. Anybody feeling nostalgic yet?

Avila Beach is a funky, surf-oriented, stereotypical beach town circa the late 1970s and early ’80s.

In my early corporate years, the company I worked for used to take annual retreats to Avila Beach. We stayed at the resort, played golf, drank adult beverages and even found time for business meetings. Great times!

Sad to say, I haven’t been back since the mid-’80s, but I read about it. In one of those stories, I read how a local resident was doing some gardening when oil started to seep from the dirt. That was in 1989. Further reading revealed that Unocal had built oil storage tanks above the town with pipes that ran down under Avila Beach and out to tankers in the bay. Over the years, corroding pipes transported 2 million gallons of crude a day but had been leaking for decades, contaminating the town. In fact, the area eventually became a 400,000-gallon toxic reservoir. Foot dragging, finger pointing and the blame game went on for years.

Then, in 1997, Unocal accepted the blame and set out to rebuild the town. The entire business district was flattened, including six square blocks of waterfront businesses; historic buildings were moved, and 300 residents were relocated. Large chunks of earth were removed to a depth of 15 feet. More than 300,000 cubic yards of dirt were removed, and no one knew when the town would return to normal.

Eventually, Unocal paid $200 million to clean up the spill. Unocal brought in “matching-grain” sand to rebuild the foundation of the city, and the 300 residents were awarded more than $18 million in restitution. Work was mostly completed in the early 2000s.

The purpose of my recent visit was to play golf at the Avila Beach Golf Resort. We were up there to do a little Paso Robles wine tasting, ocean watching and a “forget about work” getaway. It didn’t pan out that way. My reporter instincts kicked in.

Ron Siskey, superintendent of the golf course at Avila Beach, filled me in. Ron has been at the course since 1981 and lived through the entire episode, including the rebuilding of the town.

“The spill really didn’t affect the golf course. We were just outside the edge of it,” he said. “Actually, the mid-1990s were the best years the golf course had. Tourists that came to play here complained about the oil on their shoes while in town. Most stayed in Pismo Beach or Morro Bay. And it was hard to get a burger locally. The economic downturn in the late 2000s hit us harder,” Ron said, adding that the town has definitely changed. “It’s a lot more hoity-toity now.”

I did manage to play golf during my trip. The Avila Beach Golf Resort sits right on the ocean and plays inland and back again. The course is a 6,364-yard par-17 with the slope at a nice 133, and the rating is 72.5. It opened in 1969. The front nine is relatively benign. The fairways are lined with oak trees, and one can score easily with accurate shots. The back nine borders on some tidal estuaries, forcing some healthy carries over water. There are not a lot of sand hazards to negotiate.

Later, we negotiated a couple of glasses of wine on the ocean-view patio. I scored a par-3.

Works for me. Bye.