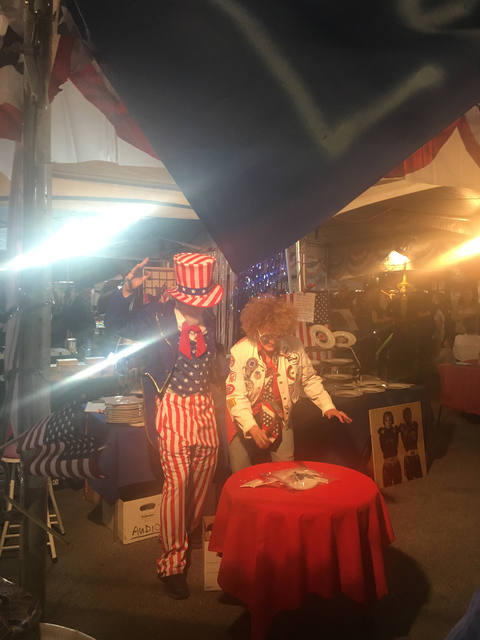 RE/MAX Long Drive Champion Tim Burke is flanked by officials on what will be the new Long Drive tee area at the Las Vegas Paiute Golf Resort. Special to View

To me, professional sports all-star games are pretty irrelevant. Defense goes out the window. Contact disappears. Smiles are more prevalent than hits. The NHL runs up goals at a record-setting pace; the NFL sets point records approaching 130 points combined; and the NBA combined scoring reaches in excess of 300 points. But there is one exception. No, not the MLB game, even though there’s something at stake there. It is, voila, the MLB’s home run contest that takes place the day before the All-Star Game. This competition fills the stadium, powers fan excitement and generates decent TV ratings. People love the long ball.

And I was about to see really long balls. No, I’m not talking 500-foot home runs; I’m talking 500-yard golf drives.

The RE/MAX World Long Drive Championship will return to Las Vegas in October. Last year, the event was at the Las Vegas Speedway, a unique venue that featured an elevated tee area in the grandstands with the grass infield as the target zone. Weird, huh?

This year, the Las Vegas Paiute Golf Resort is set to host the finals and mark a return to a pure golf environment.

The resort hosted a media day in April to introduce itself as 2014’s official venue and show off plans for the new grid and custom championship tee area. What it is planning is mind-boggling. A special, custom tee will be created 100-plus yards behind one of the driving ranges. This added length will extend the new contest grid to more than 500 yards, a figure officials think is possible due to prevailing winds. The new custom tee box and viewing area will feature stadium seating and will bring fans within feet of the competitors.

Tim Burke, the 2013 RE/MAX world champion with a walk-off drive of 427 yards to win, was on hand to christen the new course grid. Teeing from a barren patch of desert, Tim whacked a bullet of close to 400 yards.

Also on hand was two-time RE/MAX World Champion Jamie Sadlowski, who conducted a demo and power show from the regular driving range for the assembled media.

The long drive competition has been around since 1975. Geoff Long was the winner that year with a drive of 321 yards — long back in those days, I guess. In 1980, Scott DeCandia took the trophy with a hit of 295 yards. Wind must have been blowing that year.

Jason Zuback, a five-time winner of the event, was the first to win with a drive of 400 yards or more in 1997. Four of the six most recent winners have broken that 400-yard mark. The longest winning drive? Tim’s 427-yard blast last year.

Now, before you guys think you can win this thing and bring home the $250,000, you can. There are qualifying events that take place during the year. You might want to consider these facts:

Mark your calendars for Nov. 4 to catch the finals. It’s going to be exciting.