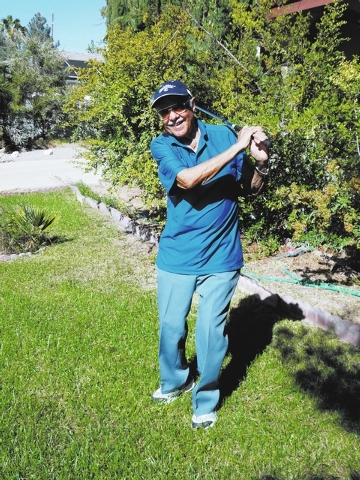 Don Hill played a mean saxophone and can shoot his age in golf. SPECIAL TO VIEW

I guess you could say this is my tribute to fantasy columns for the year. Not your usual version of fantasy sports but more selfishly: my fantasy golf dreams. things I can only fantasize about the game. I have two. I’m not delirious.

My first fantasy? The odds are overwhelming that Tiger Woods won’t do this for at least two or more decades, if at all. Odds say Phil Mickelson might achieve this for perhaps two decades and might not. Estimates say that only .001 percent of the golf population will do this.

I won’t ever accomplish it. But at least I can fantasize.

Will you ever shoot your age?

Meet Don Hill. That name may ring a bell for fans of early rock and roll. Don was the saxophonist for The Treniers, pioneers of jazz rock and roll, from 1948 to 2003, performing around the world. Las Vegas was the group’s favorite venue, playing in casino lounges for several decades. Don lives here today and performs with Jazzin’ Jeanne Brei & The Speakeasy Swingers the first Thursday of every month at the Italian American Club Restaurant, 2333 E. Sahara Ave.

And Don will soon be 92 years old.

Seems like Don also enjoyed playing golf, too. A self-taught player who golfed with Chi Chi Rodriguez and boxer Joe Louis, Don shrugs off the question.

Don tries to get out once or twice a week with his cronies, who include Sonny Charles, Skip Trenier, Dennis Hittler, Joe DiTrapani and Cushney Roberts. His latest effort: “Played Las Vegas National Golf Course last Sunday. Shot a 101. You couldn’t drive on the course because of overseeding, I’m not used to walking that far.”

Golf historians say your best chance to shoot your age is between the ages of 72 and 80. I’d like to do it once. I’d better live to a ripe old age, maybe 125.

I tentatively approached Don about some golf lessons, but his response? “I’m too old for that.”

Now that you know I’m crazy, here’s fantasy No. 2. I also want to drive the ball 400 yards off the tee. Heck, I’d settle for 300 yards. Maybe 275 with the wind from an elevated tee. If you want to join me in my quest to see how to do it, I have just the solution.

Dubbed the October 8, the field includes two former champions, the 2008 and 2009 champion Jamie Sadlowski and the 2010 winner Joe Miller from London.

These two past winners are a contrast in styles. Sadlowski weighs in at 168 pounds and stands at 5 feet 10 inches. He’s been a professional hockey player in Canada and has a personal best drive of 445 yards. He is 25 years old.

This is the first time the event will be at the speedway. Get ready for some long laser shots. The special tee box will be in the stands on turn four, approximately 75 feet above the track. Fans will be super close to the action as the finalists target the natural grass infield of the track. It’s not just hitting it long; the drivers have to be accurate as well. The grid they are aiming at is 50 yards wide and stretches well over 400 yards.

I’ll have to wait a while to shoot my age. But I’ll be out there furiously taking notes to help me hit it 400 yards. Tickets are free at longdrivers.com/get_tickets_now. After all, consider it a free golf lesson.