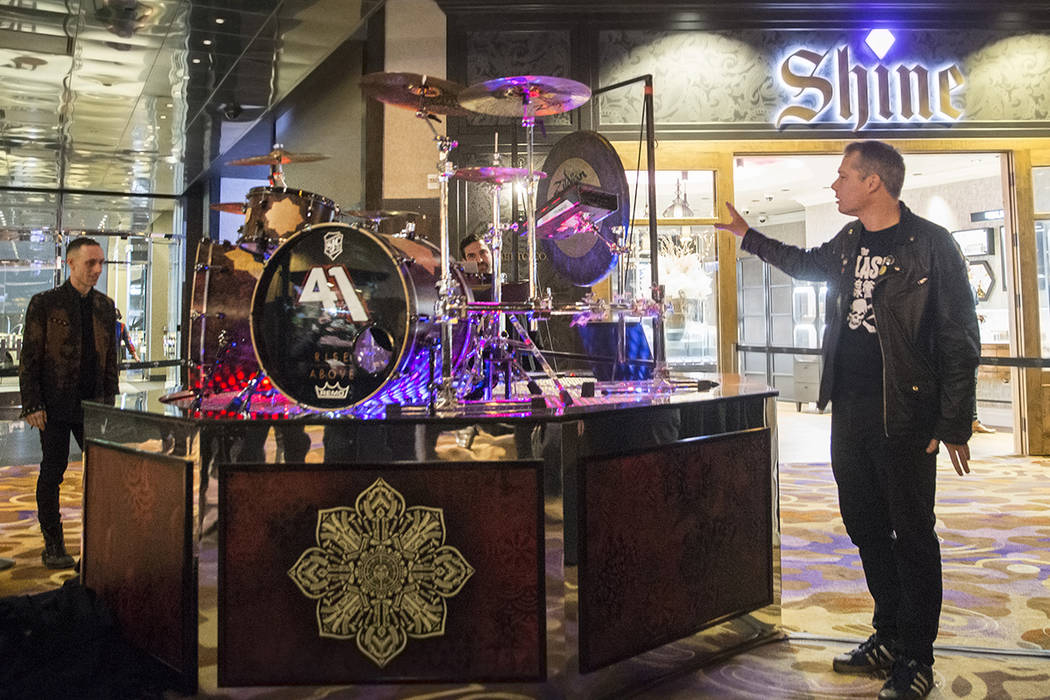 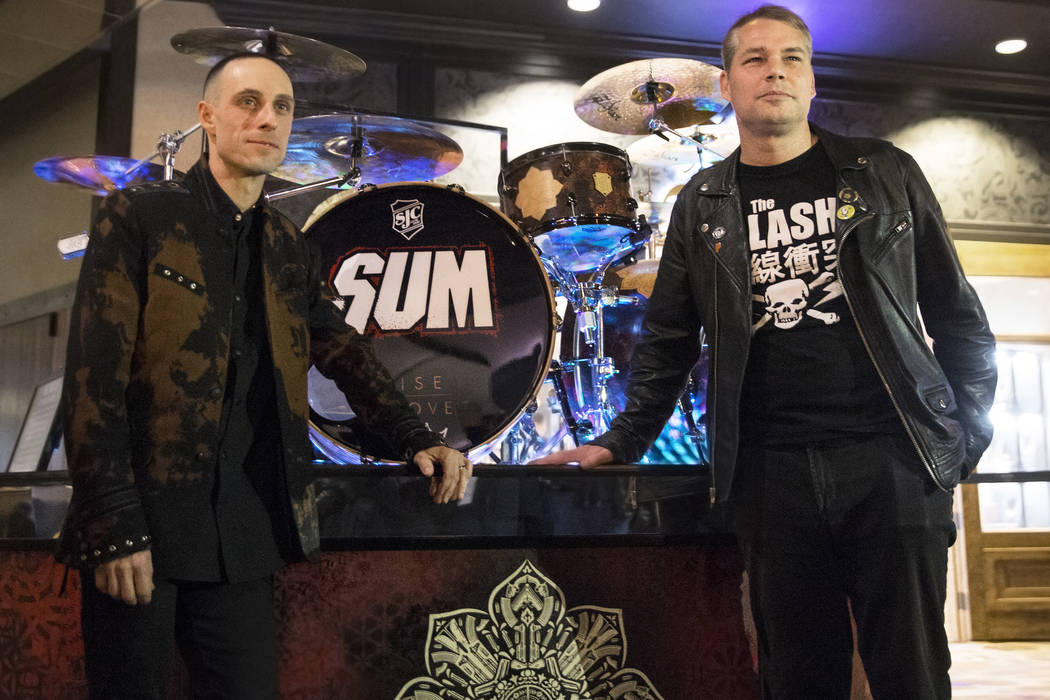 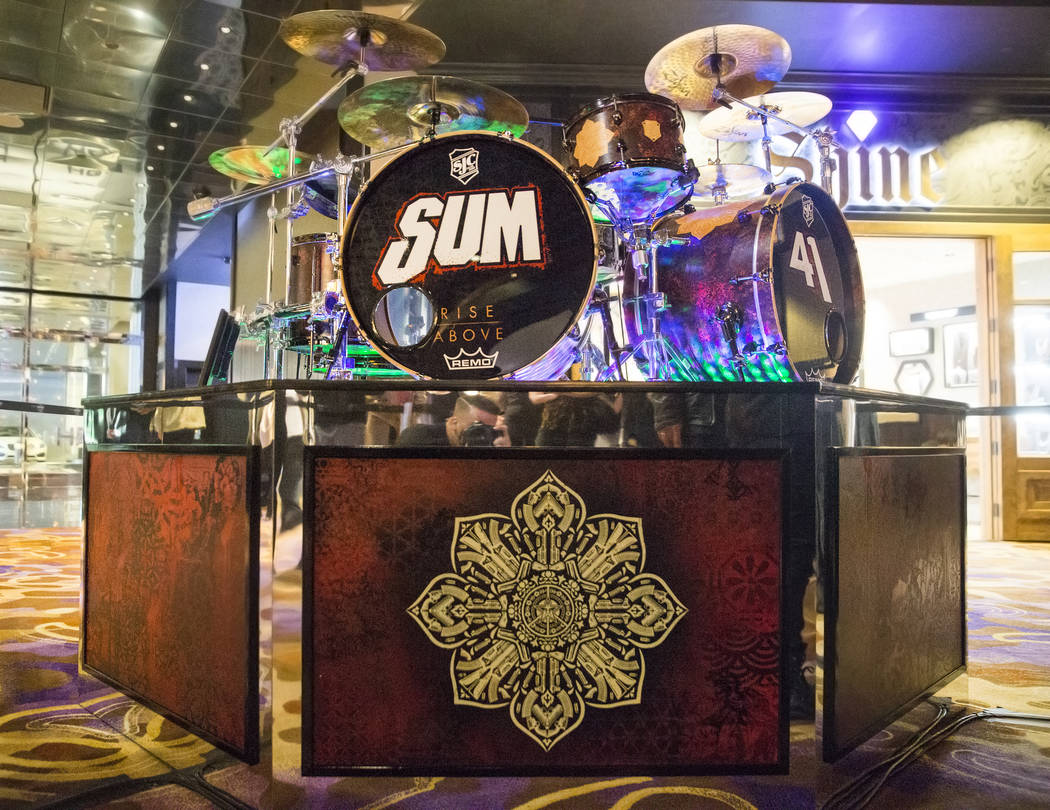 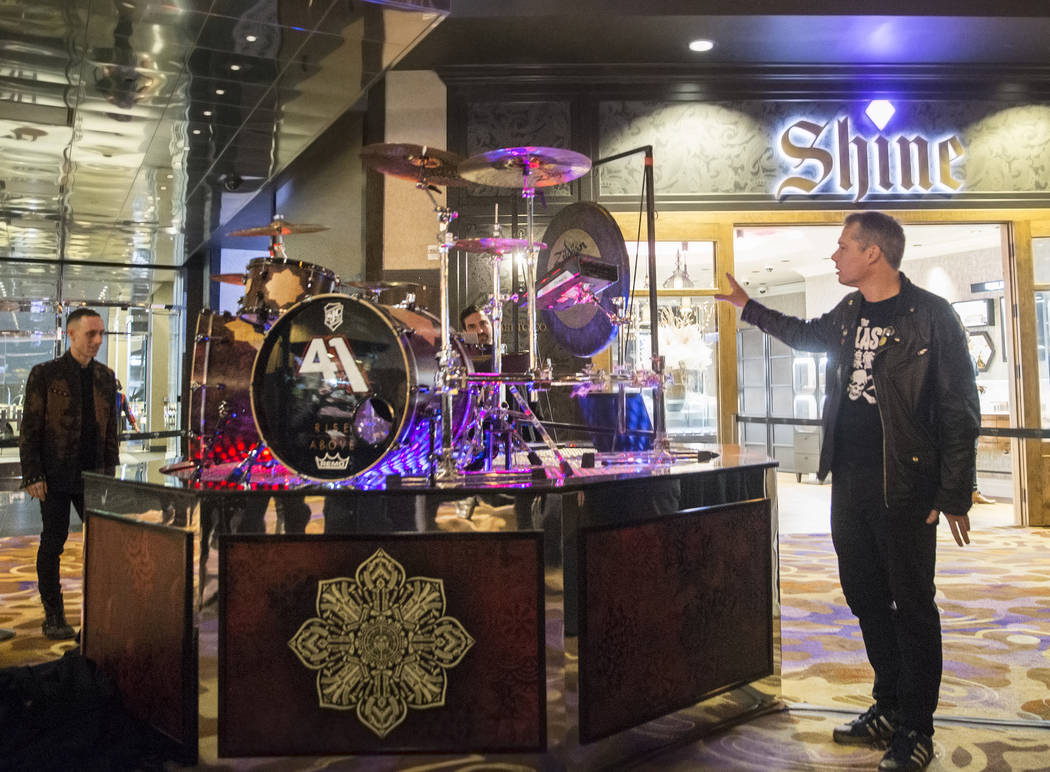 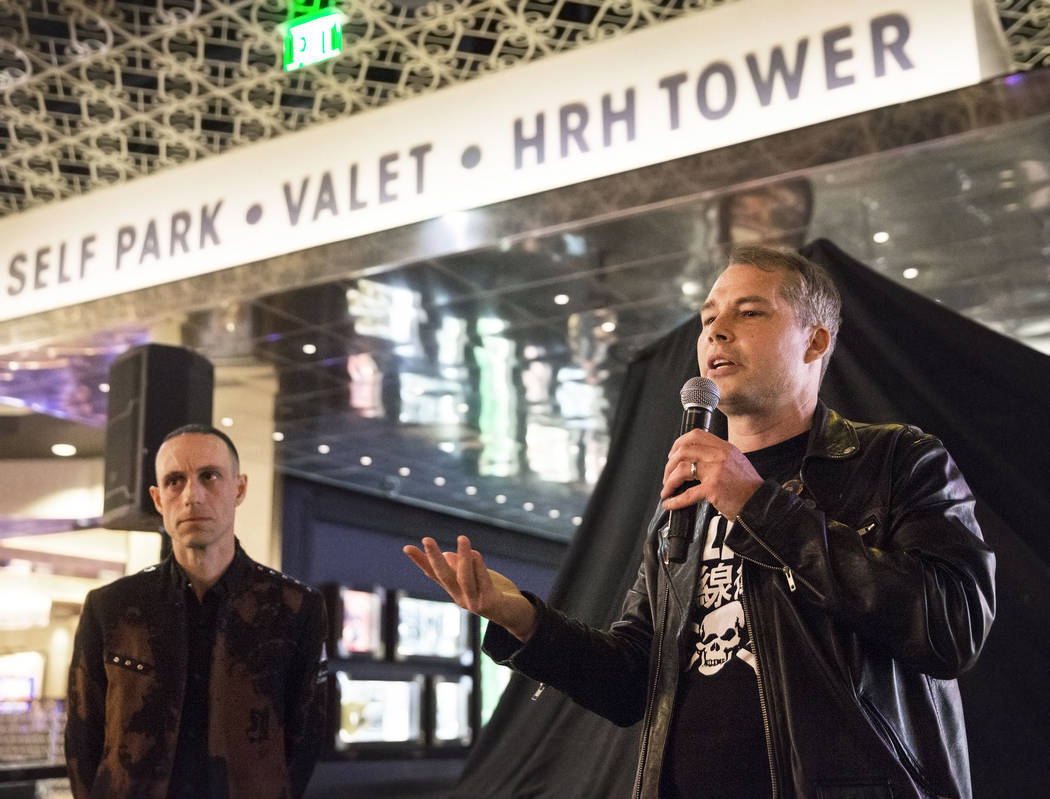 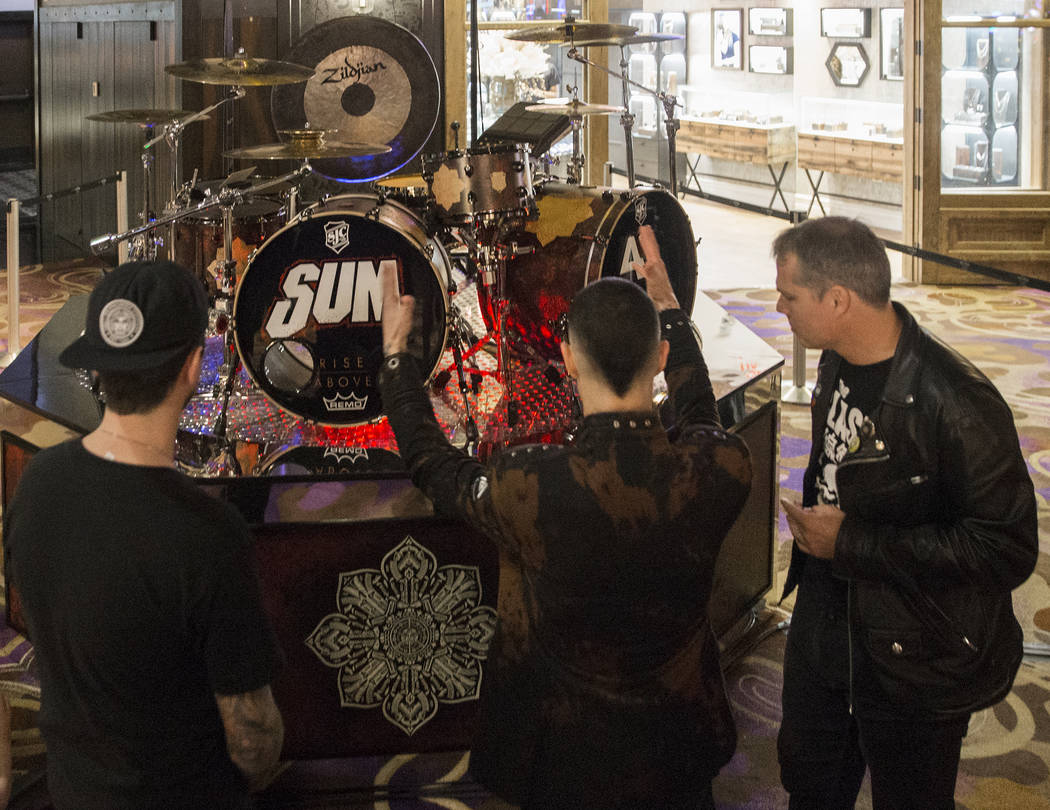 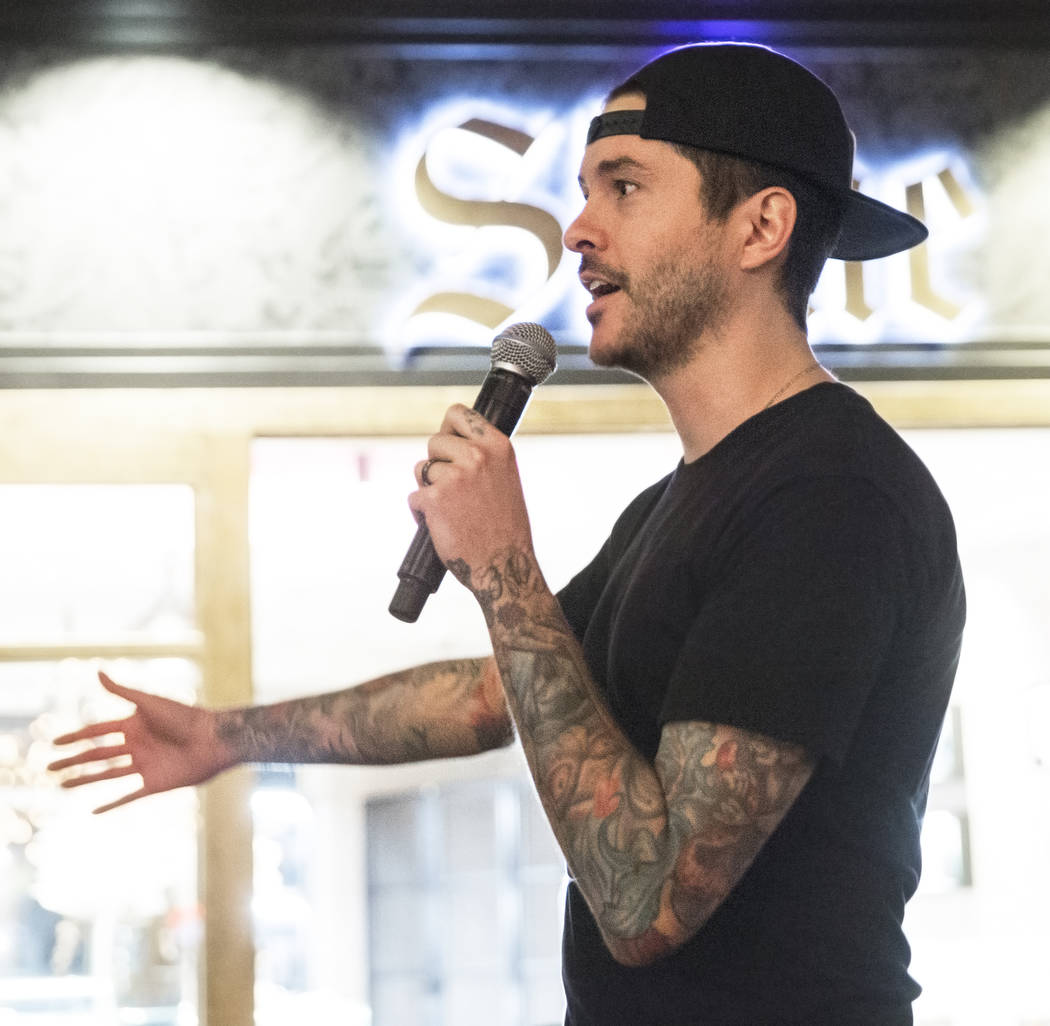 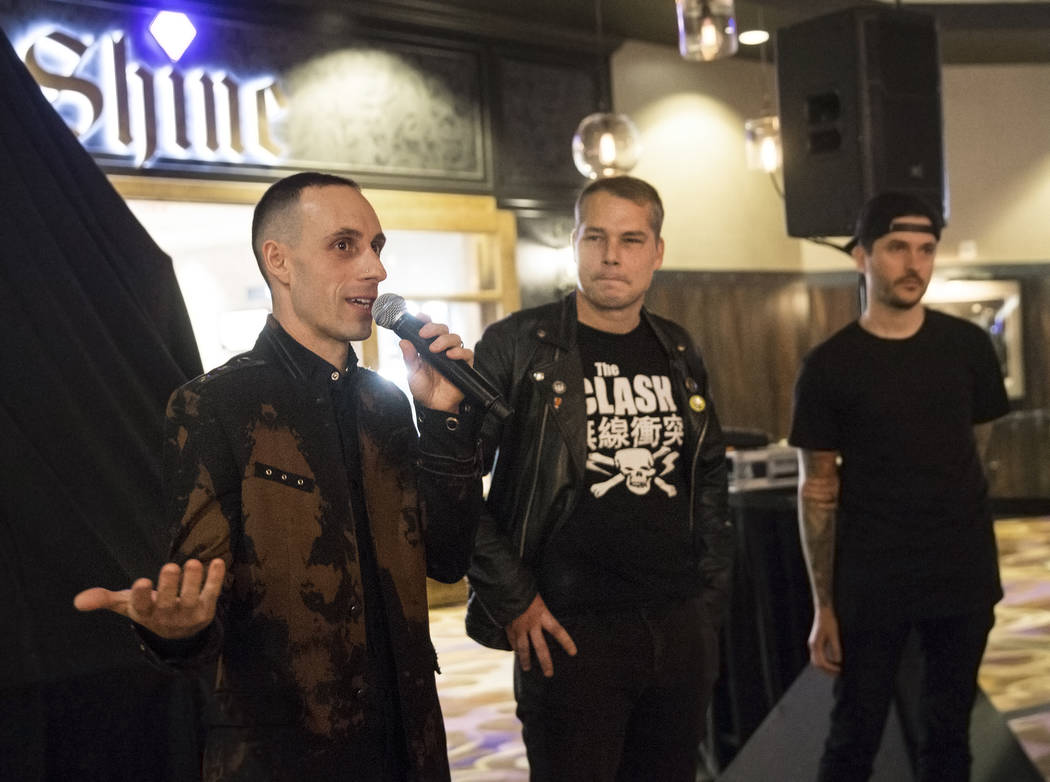 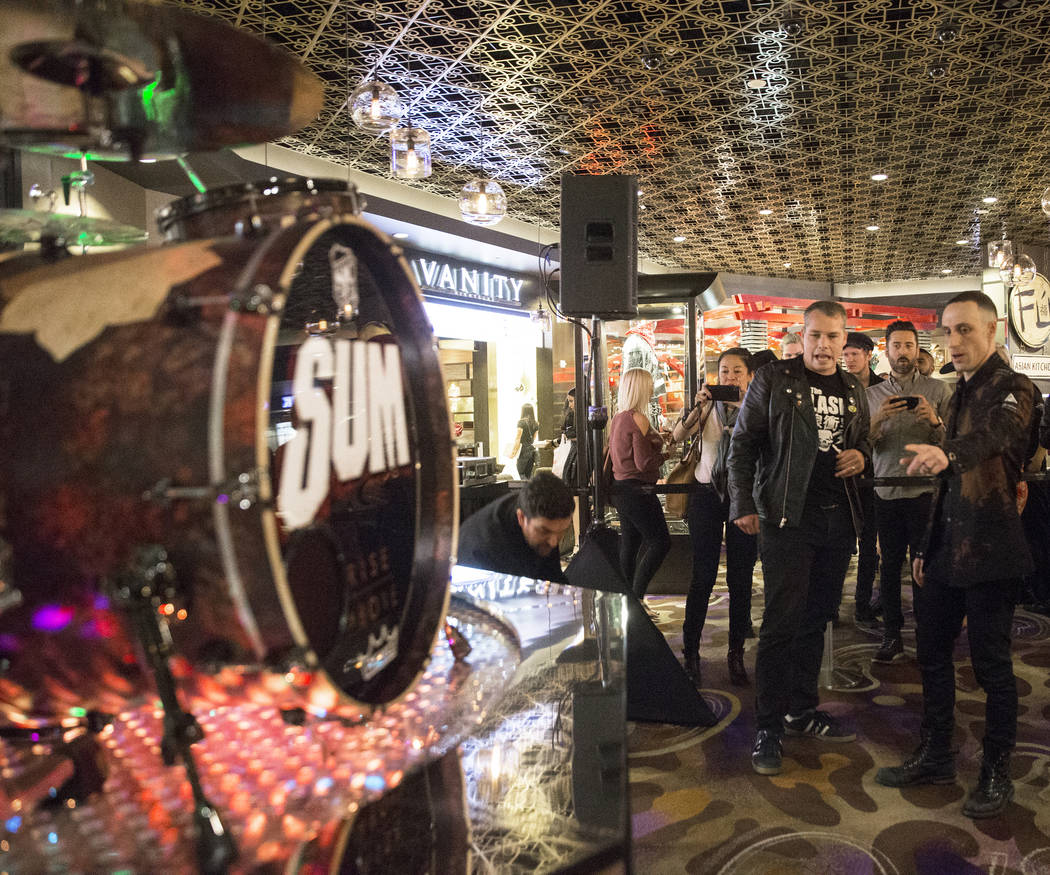 It’s a thing of beauty from afar, a swirl of color and crescent shapes as naturally inviting to the eye as a bright smile.

Come a little closer, though, and the visual allure becomes weaponized.

The drum kit is gorgeous, painted in rich maroons and golds, decorated with lustrous mandalas, the Indian spiritual symbol representing peace and harmony in the universe.

Inspect those mandalas further, though, and it turns out those aforementioned crescents are ammunition clips and pistols, AK-47s and handguns.

The artwork that adorns these one-of-a-kind drums is taken from a piece called “Rise Above” created by Shepard Fairey, the celebrated street artist, graphic designer and founder of Obey Clothing. (At the center of the mandalas is a star featuring the face of Andre the Giant, an image that first propelled Fairey to national exposure as part of his “Obey” sticker campaign in the early ’90s.)

Fairey collaborated on the project with SJC Drums, which created the kit, and Frank Zummo, drummer for punk bands Sum 41 and the Street Drum Corps, who toured with it from 2016-17.

Now, it’s part of the Hard Rock Hotel’s memorabilia collection, on display near the main entrance of the property’s All-Suite Tower.

On Friday, Fairey, SJC Drums owner Mike Ciprari and Zummo and his Sum 41 bandmates unveiled the kit at its new home atop a rotating riser.

Clad in a leather jacket and Clash T-shirt, Fairey explained the concept behind “Rise Above.”

This message is a timely one, as the deadly school shooting Wednesday in Florida has thrust the debate over access to firearms back into the national spotlight.

“It’s a very, very powerful piece about gun control,” Zummo says. “I’m not a person who speaks my views on social media or in the press. I like to keep that stuff to myself. The way I express myself is performing and drumming. I wanted this drum set to relay what I was feeling.”

Zummo and Fairey’s creative partnership goes back a few years. In 2013, the Street Drum Corps had a residency at Vinyl at the Hard Rock and Fairey painted Zummo’s bass drum head, which he had never done before.

They later decided to take their collaboration a step further, with Fairey doing an entire kit for Zummo.

“I just called him and I told him my thoughts on how I was feeling with everything that was going on in the world,” Zummo recalls of the initial conversation he had with Fairey about the theme behind the project. “He said, ‘I have the perfect piece for you for exactly what you’re talking about, my ‘Rise Above’ piece.’ ”

Explains Fairey: “Frank saw the connection between my anti-gun violence mandala and my punk rock roots, specifically with the phrase ‘Rise Above’ that functions as both an homage to a Black Flag song and a plea to rise above gun violence.”

Finding the right art piece was one thing, though.

Finding a way to actually get it on a drum kit was another challenge entirely — Ciprari spent a week researching how to make it possible, according to Zummo.

“Basically, they were able to etch that art into the actual shells, which I’ve never seen done on drums before,” Zummo says. “The background of the piece was printed onto the shells, and then they had an etching machine etch the art into it. You can feel those guns. It’s insane, just the detail and craftsmanship that went into these drums.”

According to Zummo, Fairey is working on his next kit, hand-painting it this time. They’re also creating a limited edition snare drum with proceeds to be donated to the L.A.’s Silverlake Conservatory of Music.

In the meantime, there’s “Rise Above” to provide ammo for thought.

“I hope the ‘Rise Above’ message sinks in,” Fairey says. “But in a broader sense, I hope that people see the power of art and music individually, but also how they can have even more power when they are combined.” 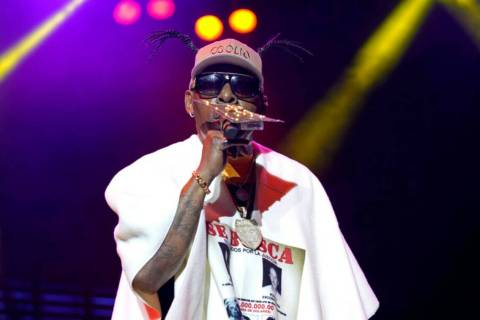