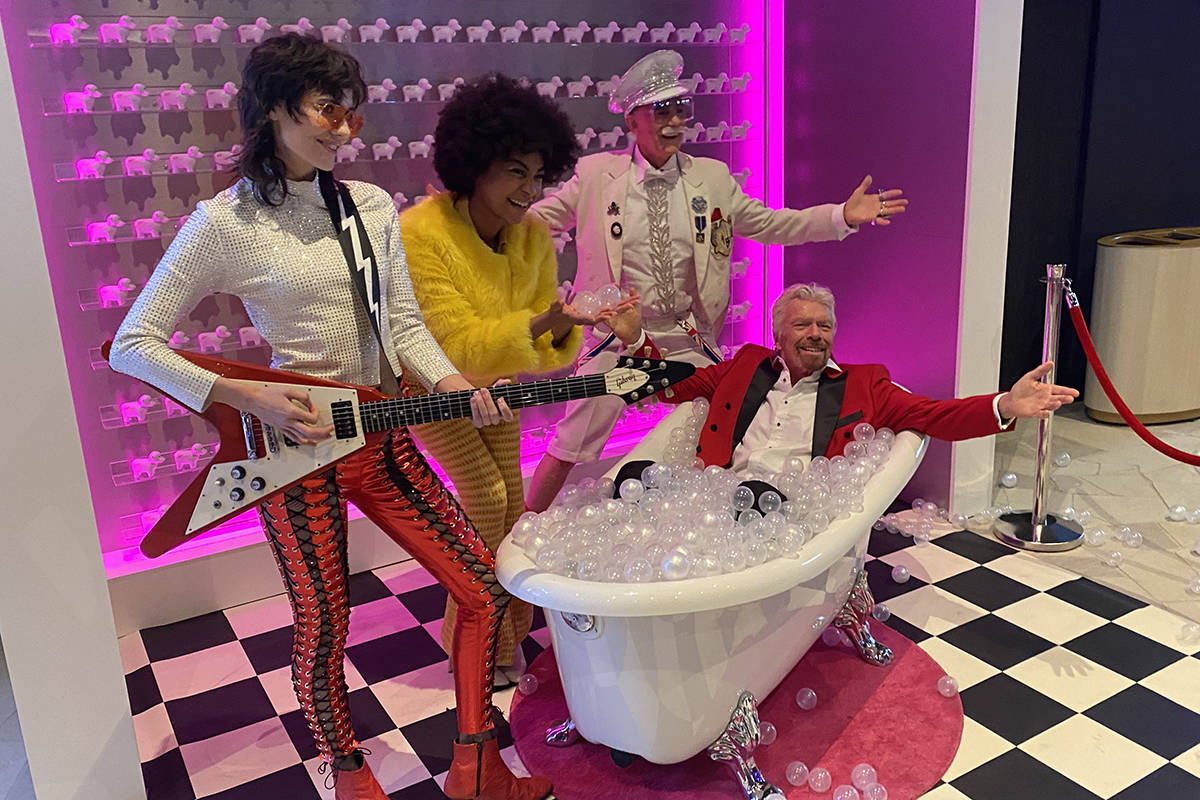 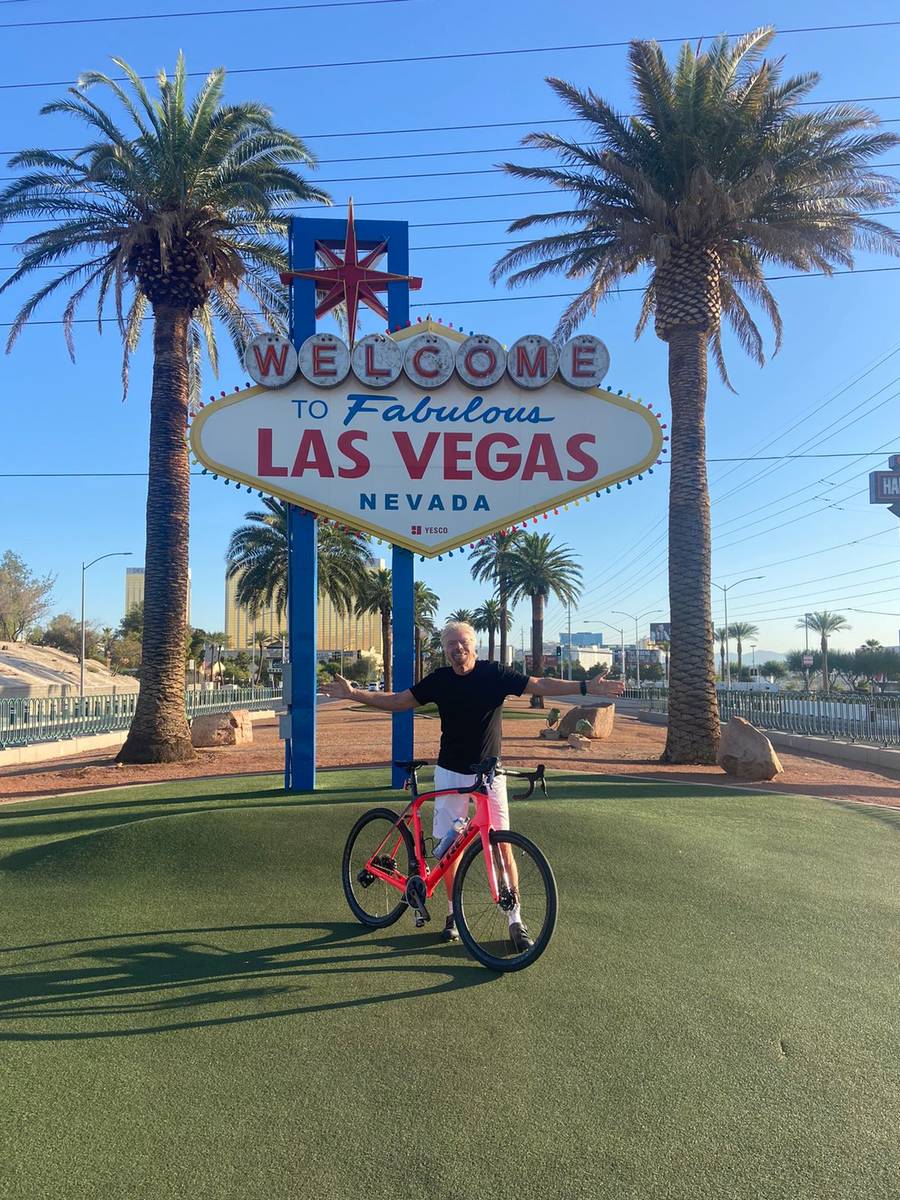 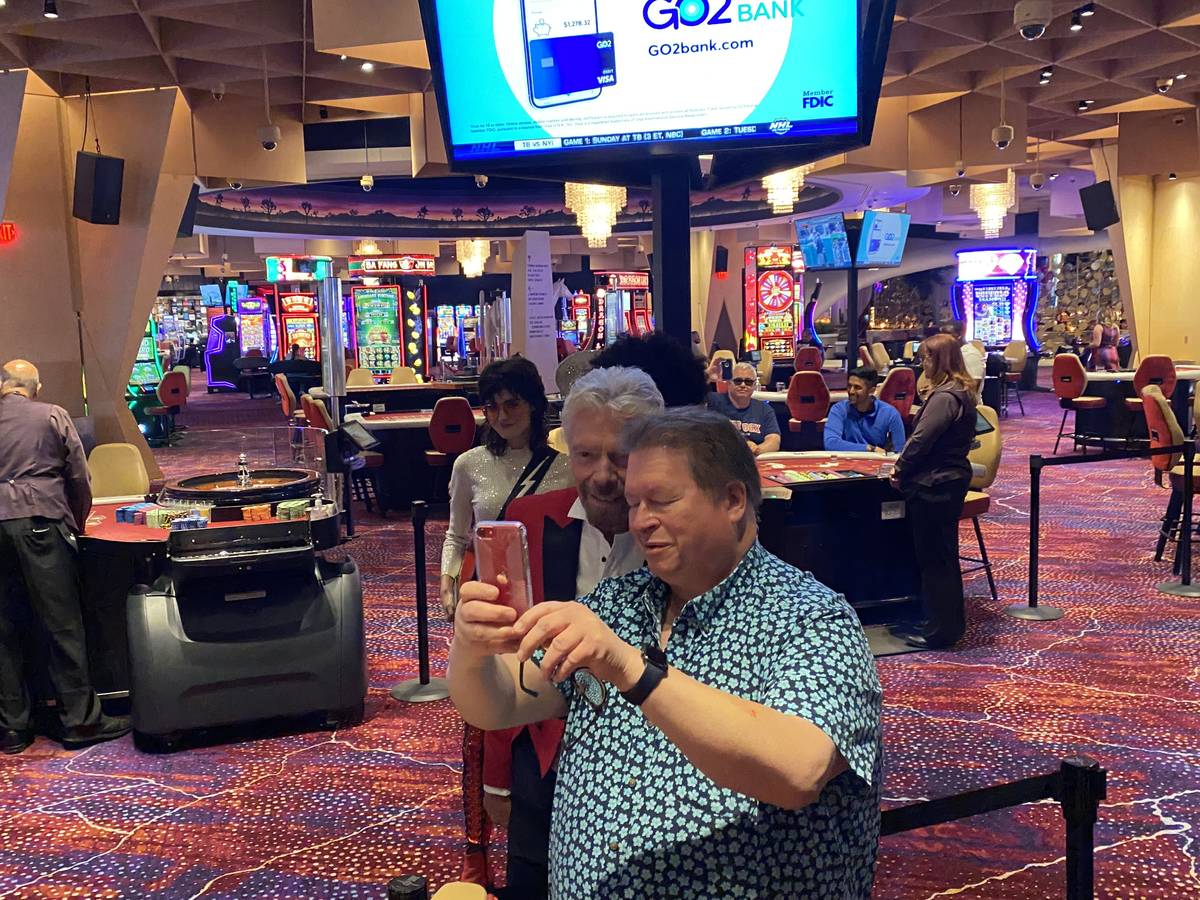 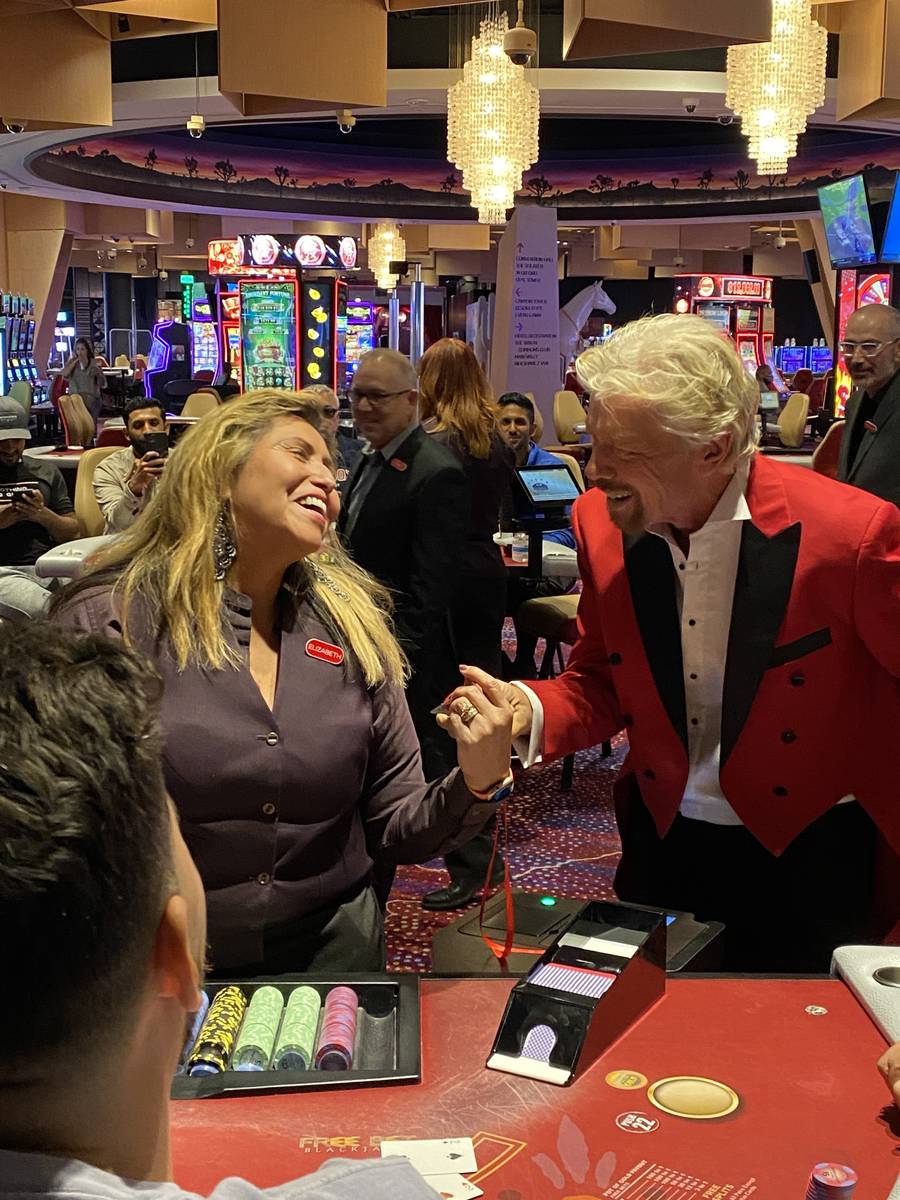 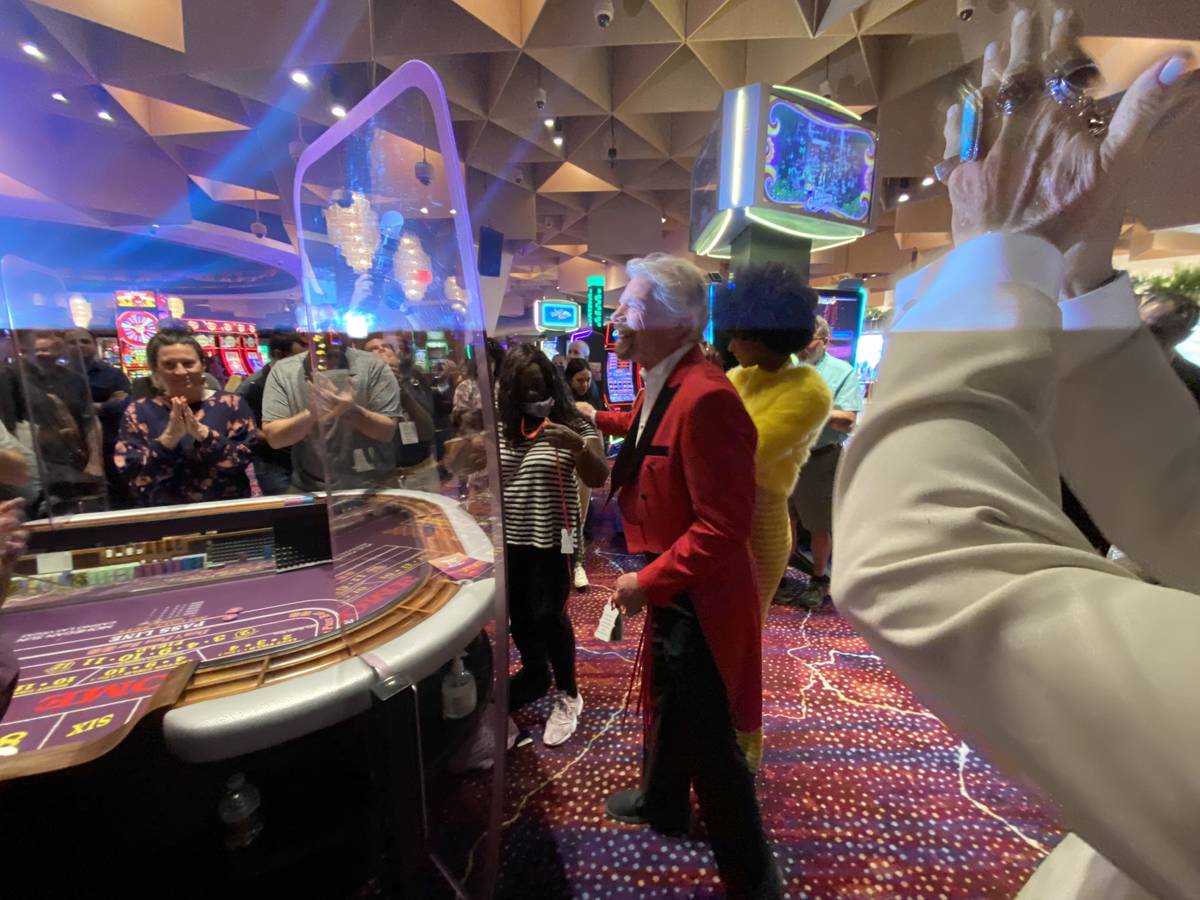 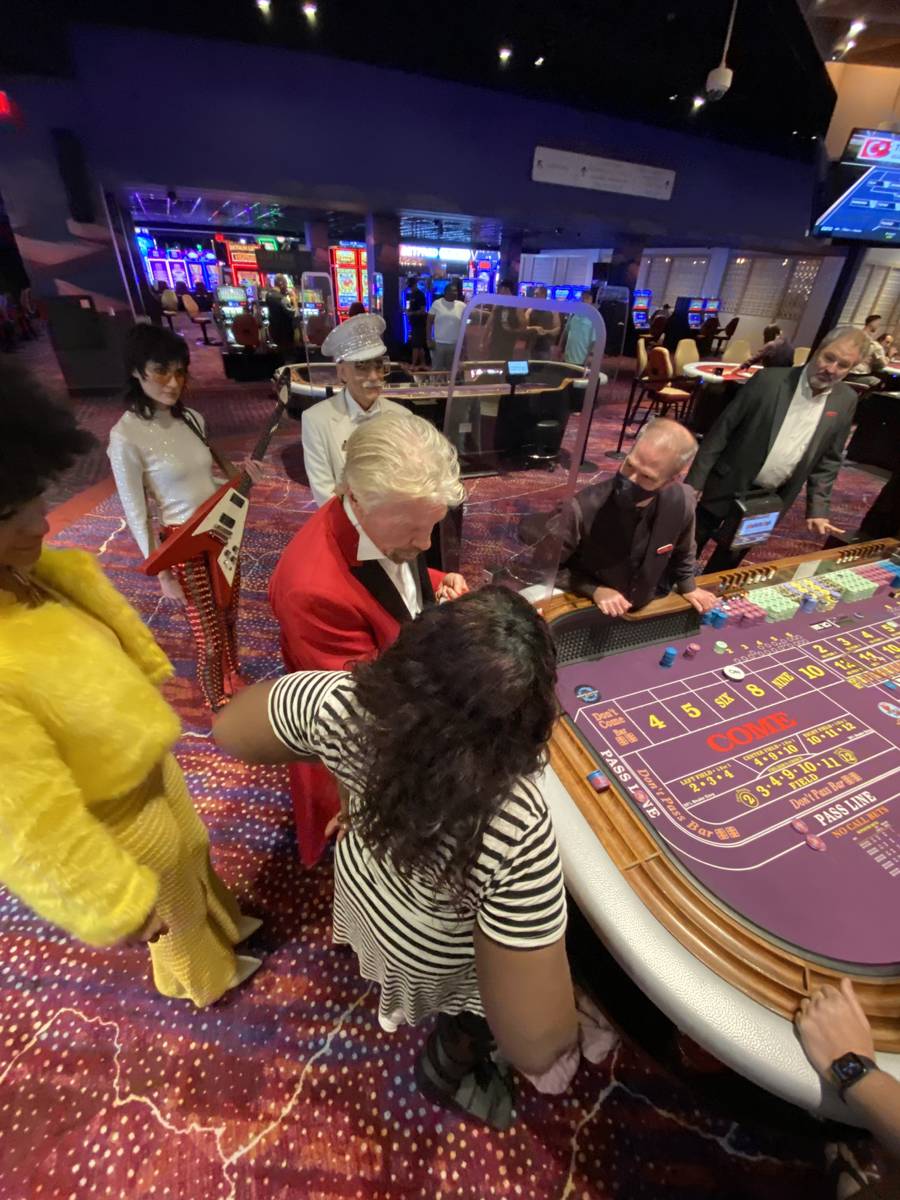 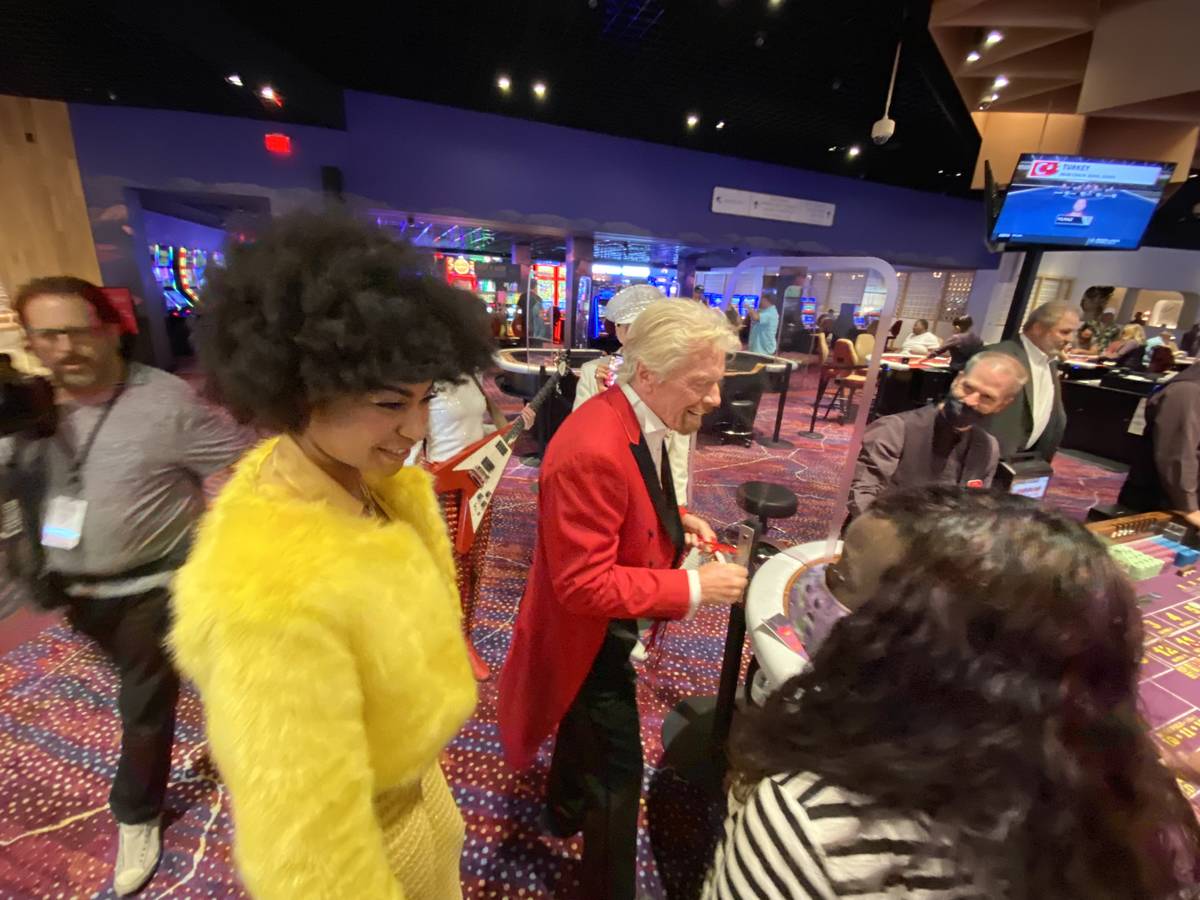 Similar to the Las Vegas legends who came before him, Richard Branson wants to play among the stars.

But he’s not above walking the casino floor while reviving some vintage Vegas hospitality. The founder of Virgin Group, an island owner prone to flights of fancy, has some Jackie Gaughan or Sam Boyd in him.

All the while, he was tailed by a cast of models dressed as something of a glam-rock band. The 60-year vaudevillian entertainer Doc Phineas Kastle is part of this atmospheric entertainment lineup.

Branson approached a guest at a multi-play video poker machine, “Do you work here?”

“No, just playing!” the customer said.

“You winning?” Branson asked? “Yes!” said the guest. “Wrong answer!” Branson said, laughing, pretending to pull the key back. But he dealt the coupon anyway.

As a lucky coincidence, one of the key recipients dining at The Kitchen at Commons Club was Liz Massei, visiting from Berkeley, California. She was happy for just receiving the commemorative key and meeting Branson. The $100 poolside credit at Elia Beach Club was a mere bonus.

Massei said she feels like part of the Virgin Hotels family, for good reason. Her son, Justin Massei, is co-owner of Money Baby!, the resort’s sports bar, restaurant and betting enclave.

“That’s why we’re here, for the opening,” Liz Massei said, smiling. “I’m thrilled, but I’m so hoarse from the concert last night.” She and the family attended the show at The Theater at Virgin Hotels, starring Christina Aguilera, Flo Rida and Mix Master Mike.

Branson sat for a 20-minute Q&A at Kassi Beach House. He’s so grounded, yet can’t shake this passion for space flight aboard his Virgin Galactic VSS Unity craft.

Branson and Amazon billionaire Jeff Bezos are in something of a space race to be the first private citizen to achieve such a star trek.

“I have dreamt of going of space since I saw the moon landing when I was a teenager,” said Branson, who has been working hard toward realizing his dream since founding Virgin Galactic 17 years ago. “We are tantalizingly close.”

He does not see this as an actual competition with Bezos.

“We don’t see it as a race, and obviously it makes a good press for it to be a race … I know Jeff well and neither of us see it as a race,” Branson said. “But we see it as, going to space is pioneering a way for thousands of people who will want to have the chance to get to space in safe vehicles, so the second we have a date I will let you know.”

Branson has earlier batted back reports that he might be in orbit by the Fourth of July, upstaging Bezos’ own plans to take flight in July.

As he has showed during his visit, Friday, Branson still enjoys the spotlight. He cranked the siren for the Vegas Golden Knights before the team’s victory over the Colorado Avalanche on Thursday. “They needed a real knight to ensure the win,” he said. Later that night, Branson introduced Aguilera at The Theater.

Branson is also fond of many methods of transportation. The 70-year-old business pioneer took a Trek bike on an early morning ride on the Strip, stopping for a photo at the Welcome To Fabulous Las Vegas sign. That shot is likely to be a piece of civic iconography, a sure sign of the city’s pandemic recovery.

Branson had a good view of the Palms, where he famously slammed into the tower while scaling the property in 2007. That was to mark Virgin America’s first flight. During this trip, his bike ride along Las Vegas Boulevard was enough of a daredevil effort.

“I wouldn’t necessarily recommend riding up and down the Strip,” Branson said. “There’s a lot of buses.” (We’ve since sent Branson’s reps links to columns about bicycling on the Strip with Wayne Newton and Billy F. Gibbons during the COVID shutdown, when such a ride was a lot safer.)

Branson’s company is in a licensing agreement at Virgin Hotels, which displays the familiar red Virgin brand across the property. Branson is not heavily involved in hotel operations. But he does have a point of view about the resort’s post-Hard Rock Hotel image, and who will populate the property.

Branson has some colorful memories of the Hard Rock, though he says of Virgin Hotels, “It is not as dark and dingy as maybe the Hard Rock was. I don’t think people want dark and dingy when they go to the hotel rooms,. They’d like it to be in natural, beautiful rooms, which they all are.”

Generally, Branson says Virgin Hotels is not leaning on gaming as its primary tourism draw.

“People want to come and gamble, they can gamble as well,” the billionaire said. “But this hotel is not built to run on gambling, like a lot of places are. It’s built to entertain people.”

Even if it means working the room, illuminating the experience, one customer at a time.

It’s another portal opened by a wealthy man with galactic vision, and forever the Master of Keys. 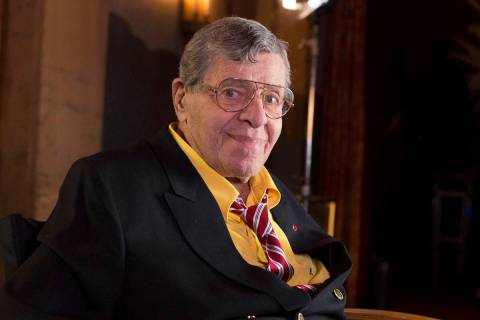 Jerry Lewis’ health issues, and much of his private life, is being revisited at 5 p.m. Sunday on the Reelz series “Autopsy: The Last Hours Of … Jerry Lewis.” 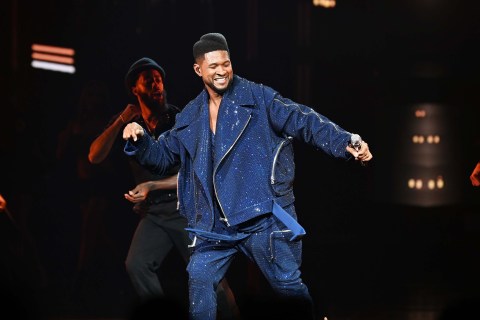 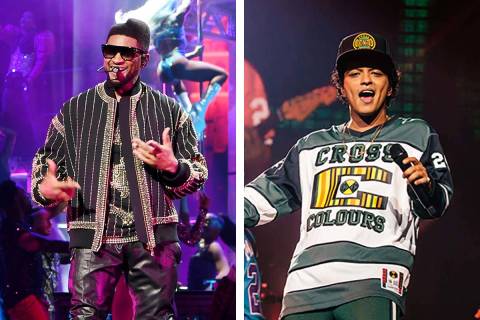 New directives allow stars to perform mask-free, but the audience is required to wear face covers. 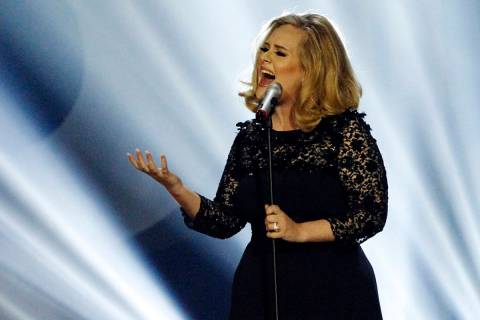 Is Adele next for a Las Vegas residency?
By John Katsilometes / RJ

We’d heard Adele might be added Resorts World’s superstar roster of headliners. But as we are reminded on the entertainment scene, Adele rumors are like the Olympics. 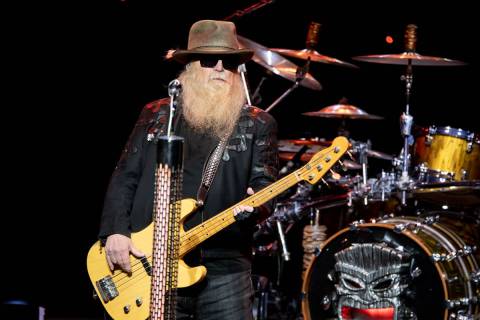 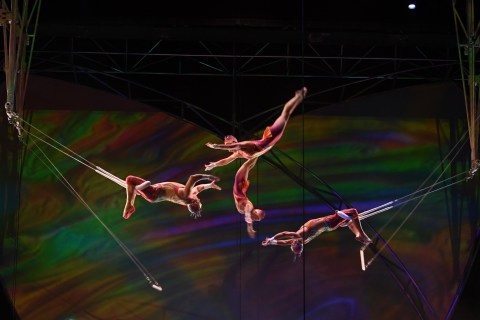 A Cirque official confirms, “We will require all show staff, artists and technicians to be fully vaccinated.” 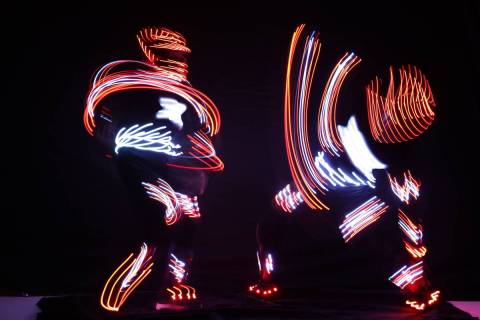 Miral Kotb developed the “iLuminate” technology, following with a company behind the concept, and the idea for the Las Vegas stage show. But her path to Vegas has been repeatedly derailed. 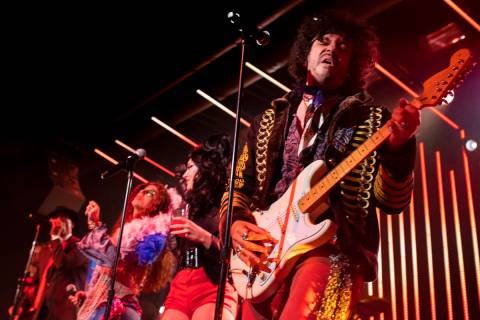 ‘A real concert,’ Vegas rock show ‘27’ turns it up at Virgin Hotels
By John Katsilometes / RJ

“27” music director and guitarists Erik Himels says of his show, “We’ve found our groove, just as a band, over the past two months. We have made a statement that way. It is a real concert.” 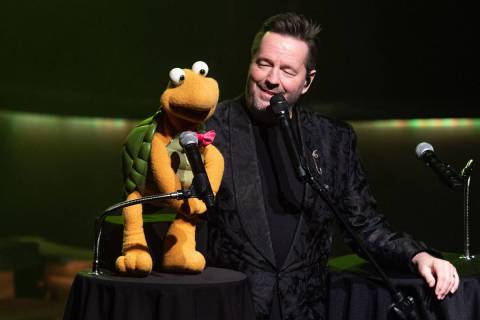 You might not know Liberty Loft at New York-New York, but several Vegas entertainers do. One is Terry Fator. 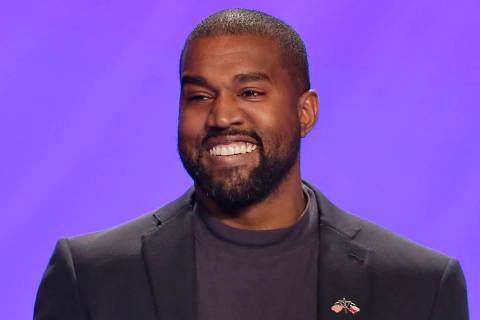 Kanye West unveiled at least one single off his new album, “Donda,” during an event Sunday at Church LV.