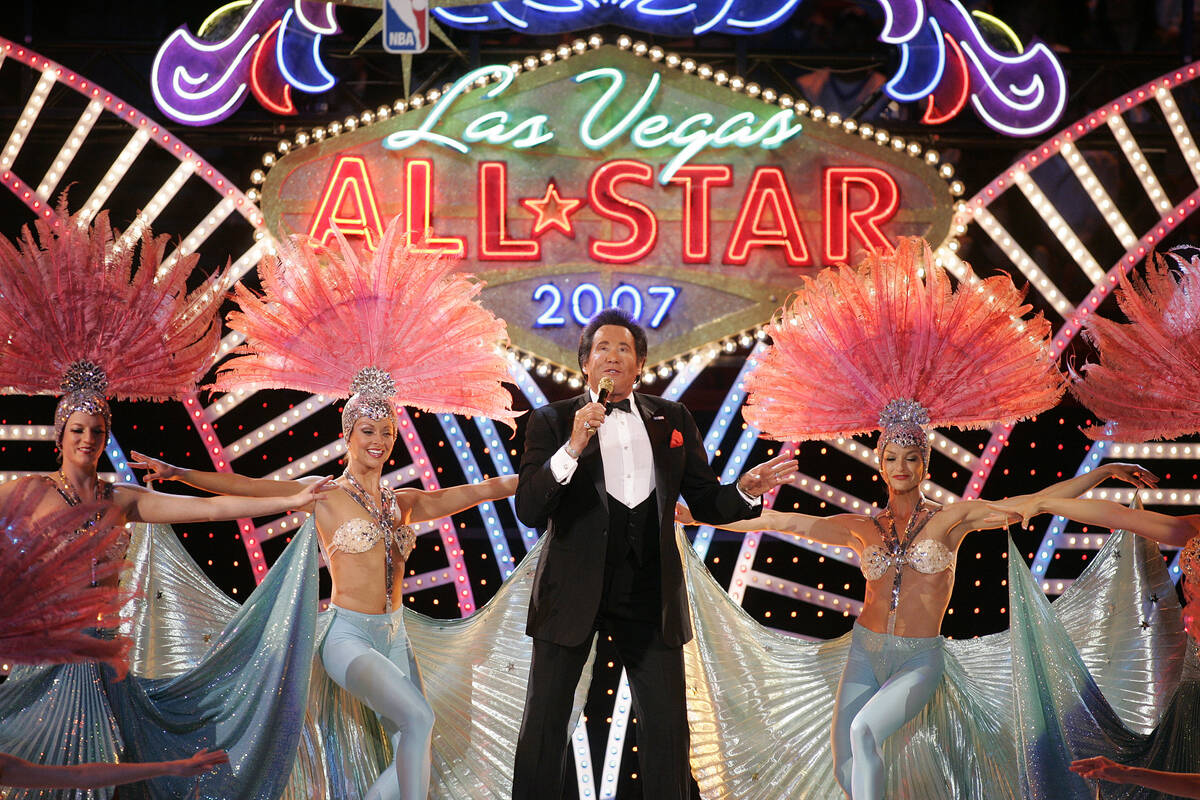 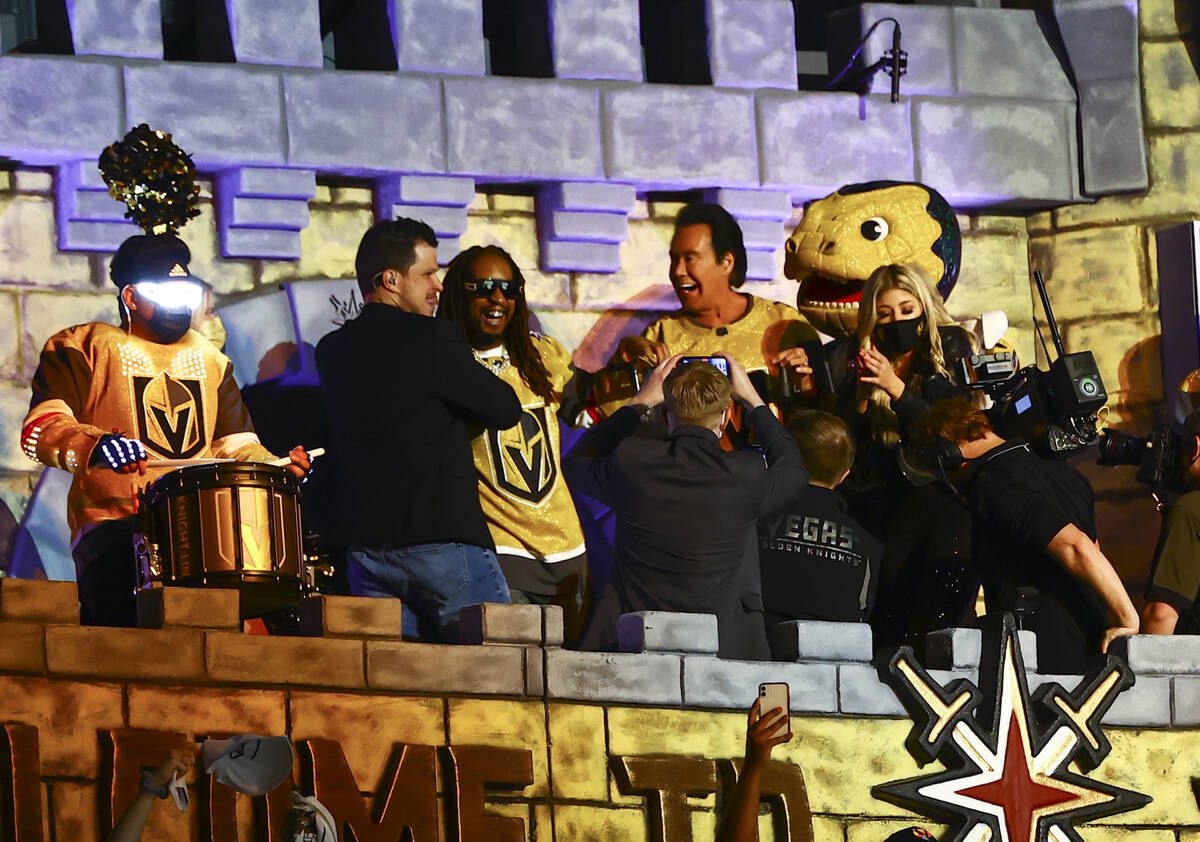 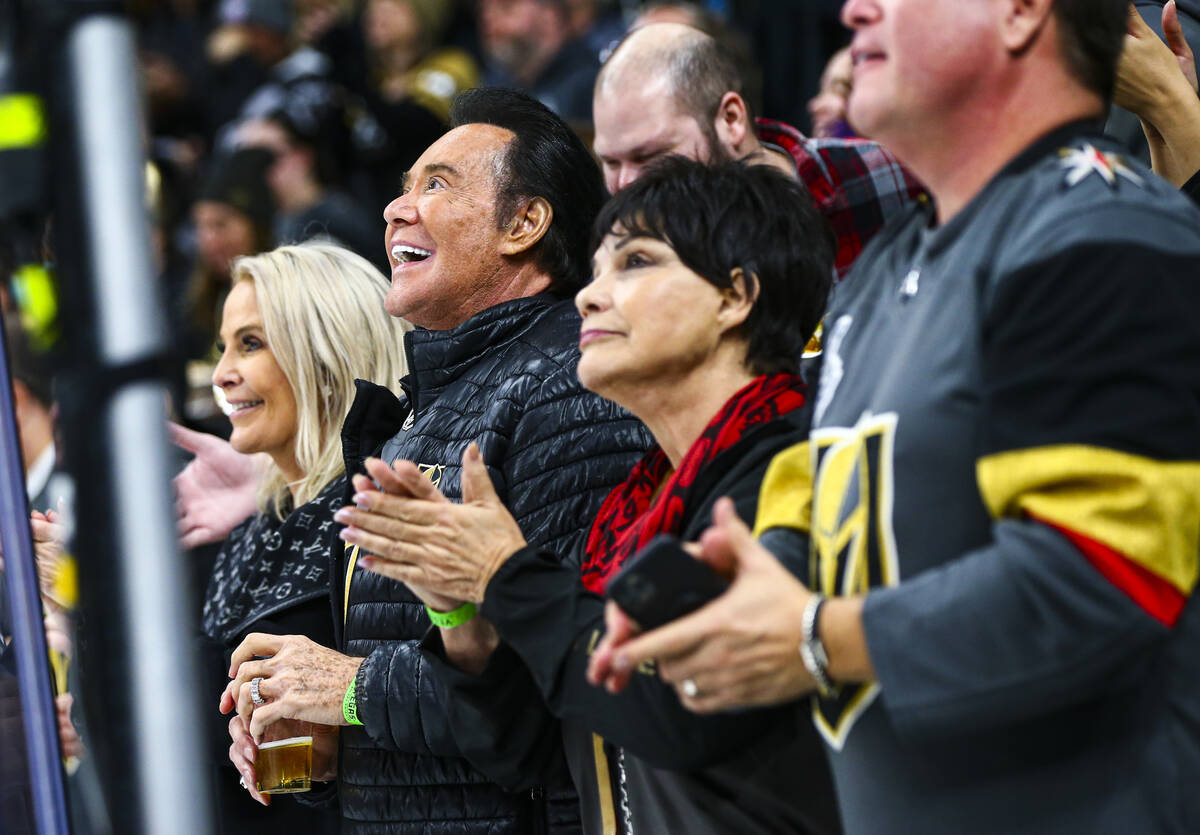 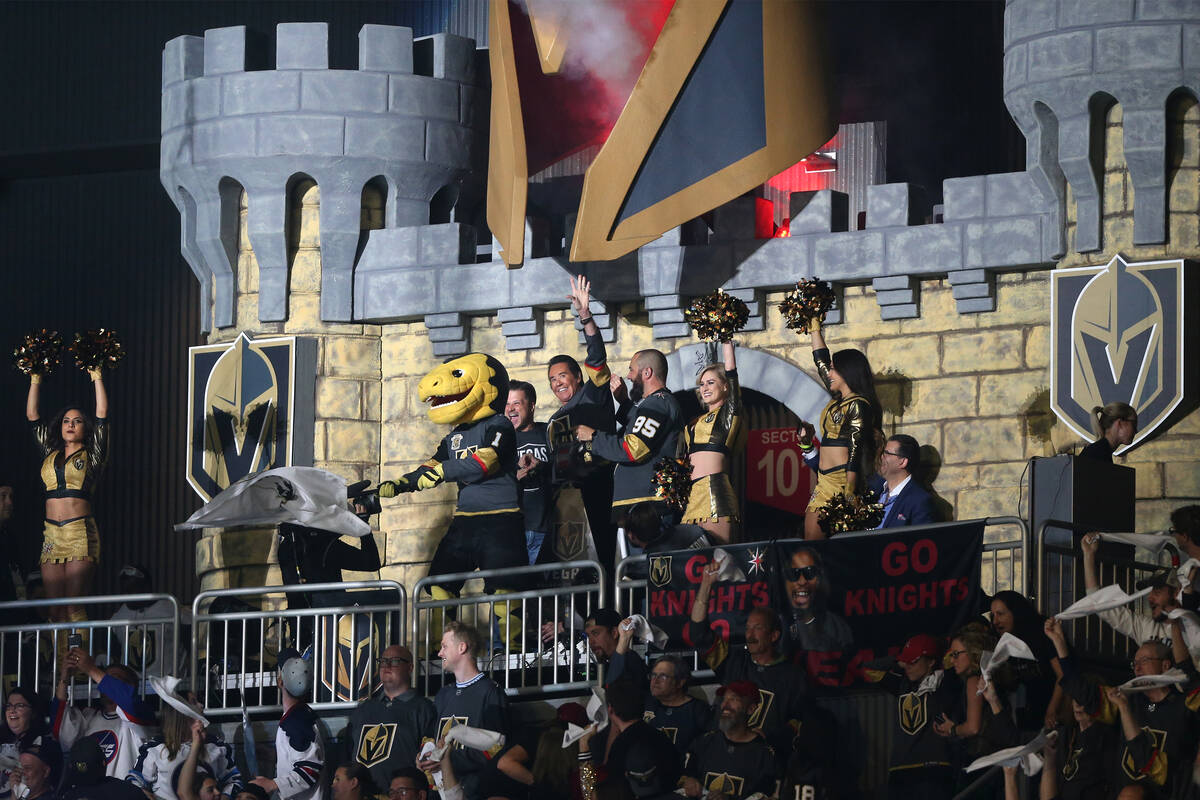 Wayne Newton raises his hand during the pregame show for Game 4 of the Western Conference Final between the Vegas Golden Knights and Winnipeg Jets at T-Mobile Arena in Las Vegas, Friday, May 18, 2018. Erik Verduzco Las Vegas Review-Journal @Erik_Verduzco 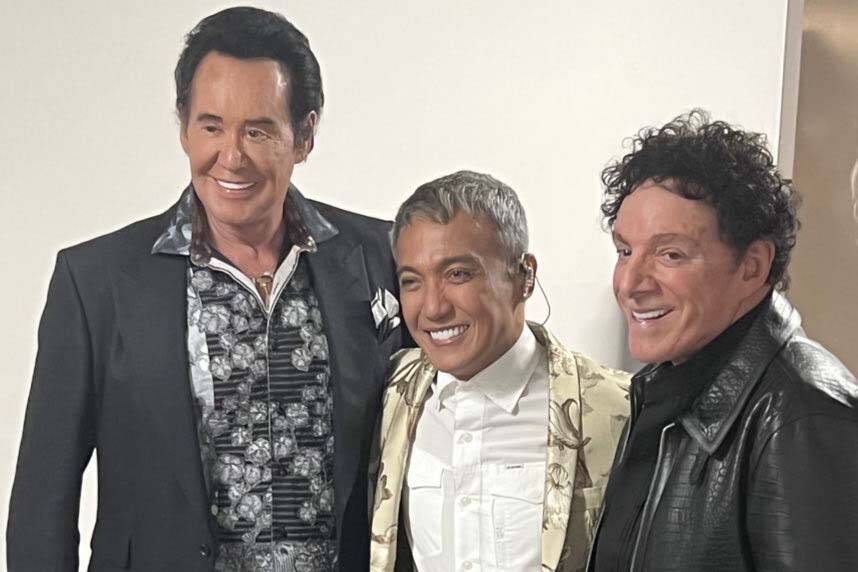 Wayne Newton has appeared at more Las Vegas sporting events than some athletes.

Mr. Las Vegas has sung the national anthem at the Thomas & Mack Center during the Jerry Tarkanian years. He’s served as honorary starter at Las Vegas Motor Speedway, performed a Vegas-fashioned medley before the 2007 NBA All-Star Game, been a celeb guest at the National Finals Rodeo, and cranked the siren for the Vegas Golden Knights at T-Mobile Arena.

Sunday, Newton is performing the national anthem, along with 43 guest stars. He’ll be joined by the Las Vegas Academy singers prior to the Raiders preseason opener against the Minnesota Vikings.

It is Newton’s first appearance in a formal role at Allegiant Stadium. But a painting of him wearing a No. 20 Raider jersey is displayed inside the venue. (he’s wearing the white jersey, we guess looking for a road victory).

“It’s an honor to represent my home town whenever and however I can,” Newton said Saturday. “I’ve become an avid Raider fan, and also a fan of Mark Davis and his support of Las Vegas.”

The moment is a boon to the LVA choir, which has performed a few memorable shows of its own and picked up a dozen Grammy Awards over the years. LVA has backed Hugh Jackman, Barry Manilow, Foreigner, the “Star Wars” concert tour, Boston Brass, violin virtuoso André Rieu, members of the “Memphis” Broadway cast and the great producer/director Kenny Ortegea. The troupe also repped the city during the NFL Draft from Las Vegas in April.

Impress your friends, or not, by knowing this specific Strip connection between Knight and Newton: They have both headlined a residency show in a famous Vegas showroom, at different times. Answer at the end of this sentence … Tropicana Theater.

Band on the run

David Perrico and the Raiders House Band is performing on a new stage at Allegiant Stadium. The platform is raised about 2 to 3 feet. But the band stature over the past year has been lifted a lot higher than that.

“We were named the house band just about a week before preseason last year,” Perrico says. “Now we have more than 100 songs we can plug in. We have a good rapport with the Raider team, knowing what flows and works. It will continue to evolve.”

The band is performing “We Are Family” behind Kathy Sledge of Sister Sledge, for the reunited Raiderettes celebrating the dance team’s 60th anniversary this weekend.

Similar to a QB scanning a playbook, Perrico is reviewing a list of “hot” songs to be played during the game. It’s a task, as Perrico charts eight or nine variations of each song to plug in when he’s prompted during the game. So you might hear 30 seconds of, say, “Hot For Teacher” by Van Halen during a break in the action. Perrico is also readying new selections from Bruno Mars, the “Jaws” theme and a sample of James Bond themes (the band also knows “YYZ” by Rush, so let’s get that cued up, too).

“This is a lot, it’s more than just a band that’s very good,” Perrico says. “The band has to be nimble to react to a cue. We’re the Raiders’ band, but the band itself is like a football team.”

If the team takes the field with 19 players. We’ve said from the start (and so have such Vegas music luminaries as Jerry Lopez of Santa Fe & The Fat City Horns) that the team’s investment in Las Vegas musicians is a victory for the entire entertainment community.

After a series of fits and starts (more fits than starts, actually), “Vegas! The Show” has opened at V Theater at Planet Hollywood. About two dozen ticket-holders turned out Friday night, the show’s first performance since March 17 . The show had previously announced six re-opening nights before sticking with Friday.

Nonetheless, we are encouraged that producer David Saxe has steered his flagship production to the stage. We’ll be even more confident when he reports it is ready for a proper canvassing by media types. But for now, one of the city’s great, underrated shows is back onstage. Support it if for no other reason than the show celebrates the image of the showgirl.

Blame it on the Gossa-Nova

Matt Goss is all in (cha-cha-cha) on his move back to England. The long-running Vegas club headliner is a contestant on the hit series “Strictly Come Dancing” on BBC One. Gossy’s participation in the show was announced last week. He’s the eighth of 15 contestants named, and to be honest he’s the only one I’ve heard of.

No matter. The show has been a staple in the U.K. since its 2004 debut, branching out to “Dancing With the Stars” in the U.S. Goss should reach millions of viewers, a handy platform to promote his latest album “The Beautiful Unknown,” and his latest single, “Are You Ready.” That song is to be added to an extended version of the album due this year. “Strictly” also offers a singing segment, for those who sing, and we expect the former Las Vegan to dial that up, too.

The show premieres Sept. 10, go to bbc.co.uk to learn the steps.

Westgate Cabaret headlining magician Jen Kramer asked for the name of an audience member during a show last month.

The person called out, “Jen Kramer!”

“I’m so excited!” magician Jen Kramer said. “Is there a Jen Kramer convention? I didn’t get the memo!”

Magician Jen Kramer says this has never happened to her before. Catch the very funny exchange on Kramer’s @jenkramermagic Instagram page.

The Bailongo A La Mexicana series energizes the famed Railhead at Boulder Station, with rotating artists every weekend. Saturday it’s the Latin-country band Conjunto Secreto, and Aug. 27 it’s Los Hermanos Padilla. Check the stationcasinoslive.com page for details. Doors at 10 p.m., guests must be 21 or over and never a cover. Dance the night away, as we say. 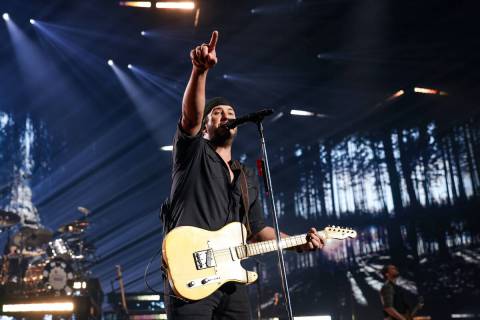 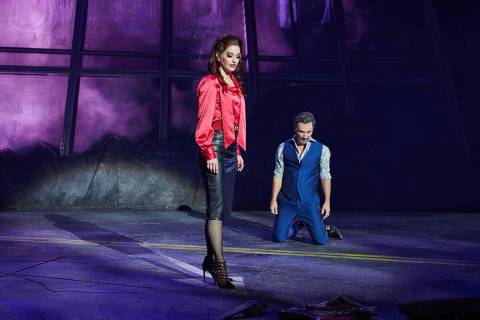 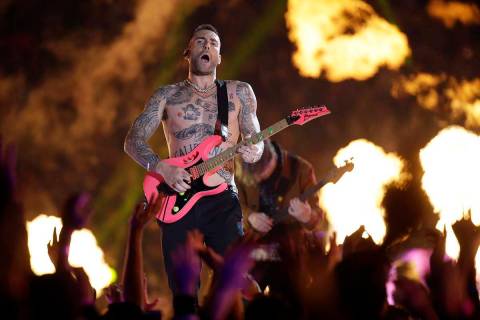 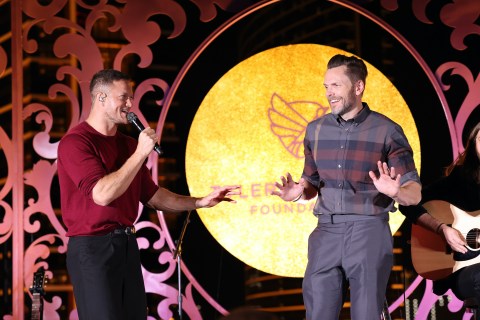 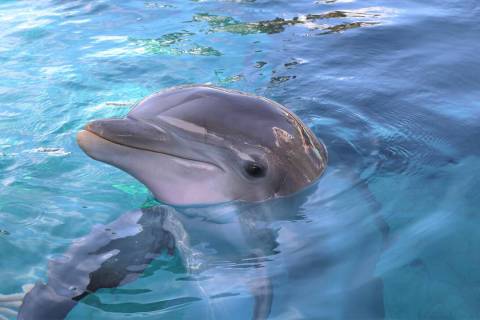