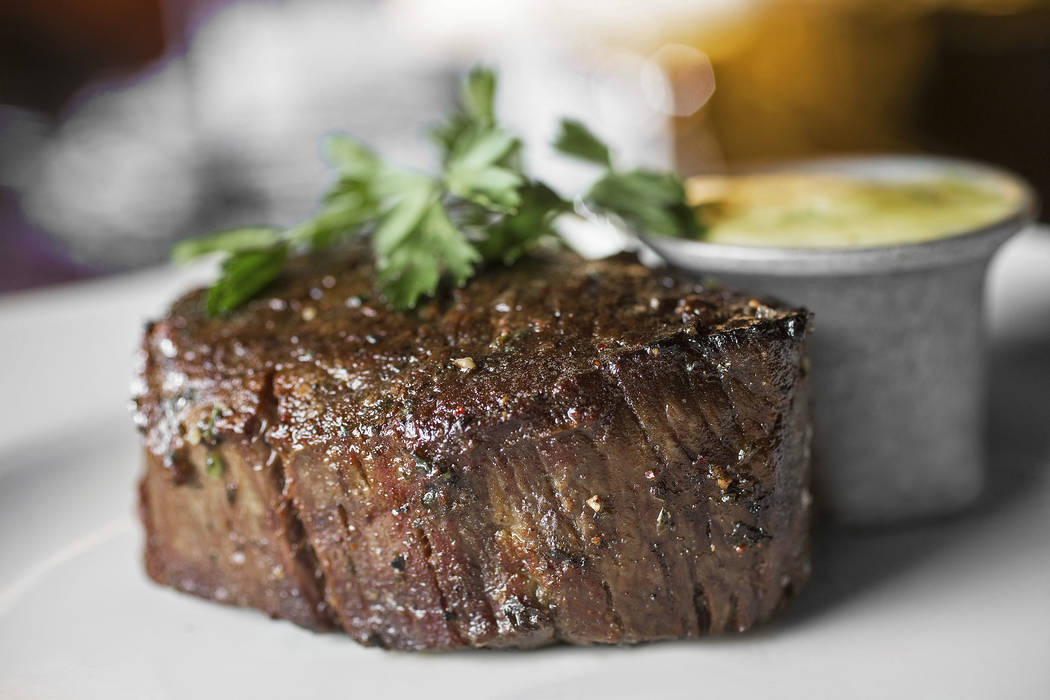 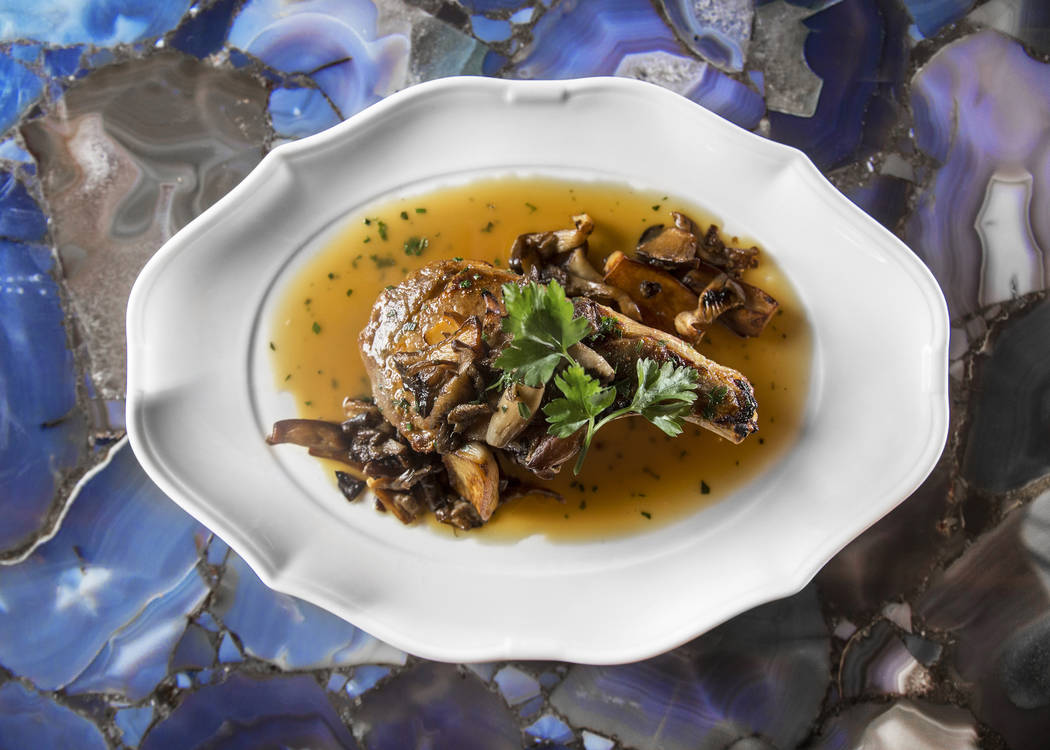 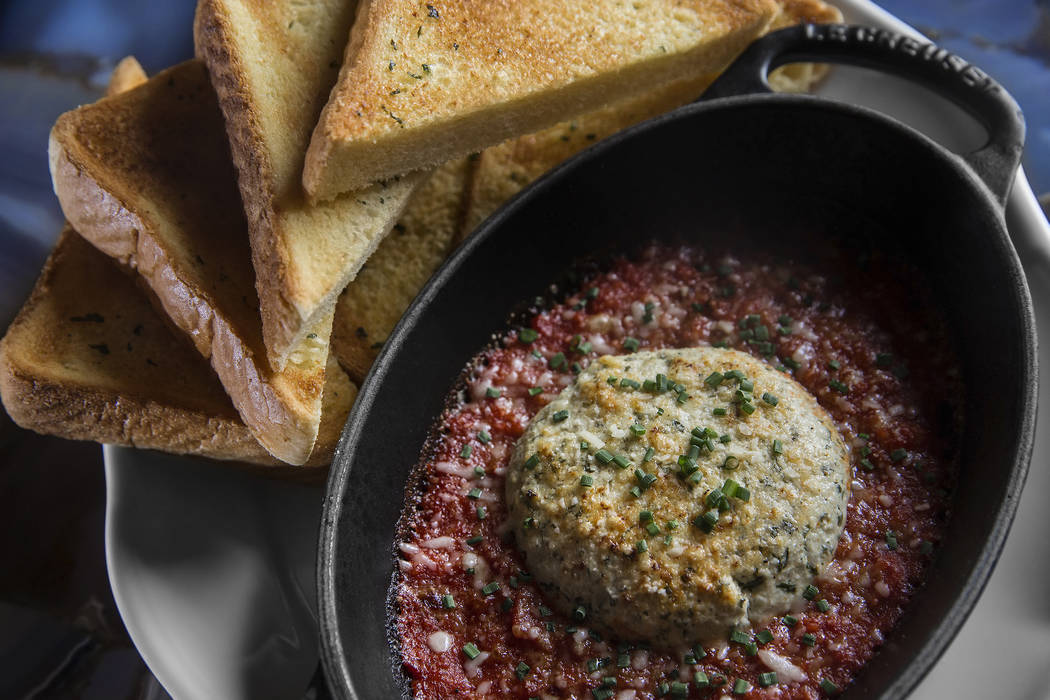 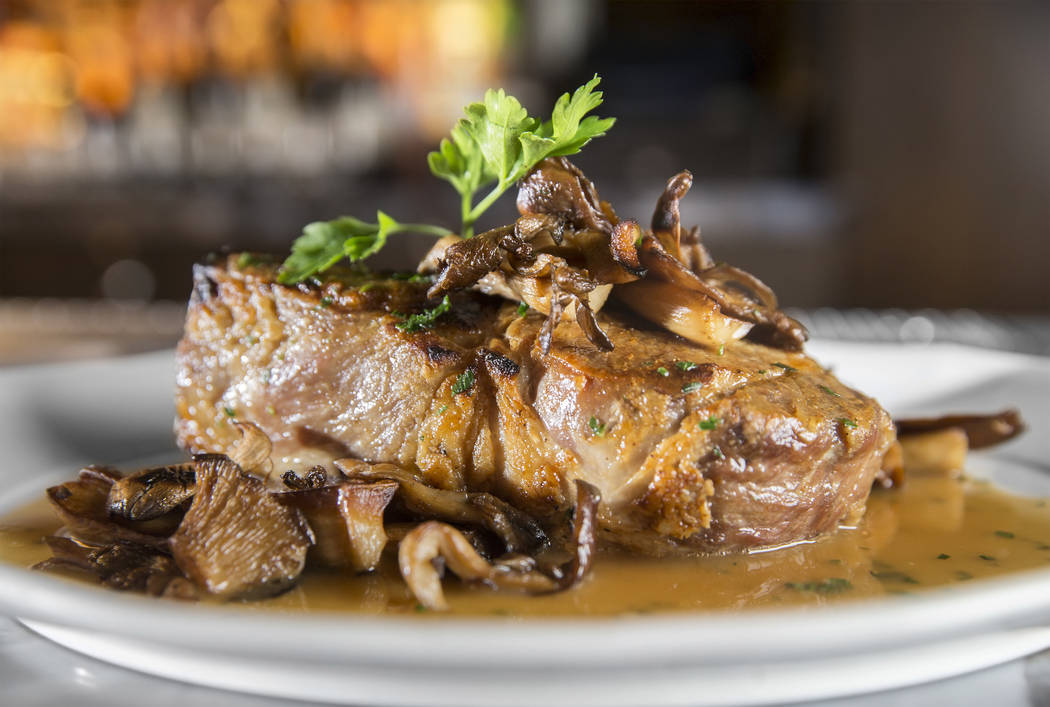 That Bavette’s Steakhouse &Bar doesn’t fit the stereotypical Las Vegas image of glitz and glamour is obvious on first sight of its stately door crowned by a sweep of studded red leather. It’s a Narnia-esque portal from the cacophony of the casino at the Monte Carlo (soon-to-be Park MGM) to the dusk of the restaurant’s entry lobby. There, all is plush and urbane, with framed art and mirrors covering floor-to-ceiling walls, against which sit overstuffed chairs.

The atmosphere continues into the dining room, where soft jazz floats over hard surfaces of dark wood, red-velvet banquettes and tables graced with gentle lamplight conveying an intimacy that belies how closely they’re spaced.

Servers at Bavette’s advise that portions are large, which is informative and refreshing in a tourism corridor where upselling can be relentless. The menu is pure steakhouse, but with lots of updates.

For starters there’s the requisite shrimp cocktail and steak tartare but pride of place is given to baked goat cheese ($14). The thick disc of cheese came in a cast-iron dish to keep things piping hot and was topped and surrounded by herbs and a zesty tomato sauce. Texas toast triangles on the side were an effective conveyance.

Bavette’s generous portion size was evident in the double-bone Berkshire pork chop ($41). Adorned simply with sauteed wild mushrooms and a light herb jus, it was thick, flavorful and moist.

A 6-ounce petite filet ($41) also was deeply flavored in a cool rare with a substantial char on the surface. It was accompanied by simply seasoned roasted tomato and watercress that had been sauteed just until it was wilted, which changed its peppery flavor profile to one that was more vegetal. The well-executed bearnaise served with it would be an extra charge at most steakhouses so that was a plus — one of the few bargains among Bavette’s Strip prices, where the next steak on the menu cost $20 more.

The kitchen clearly has a way with wilted greens; in an ample serving of creamed spinach ($12), the vegetable was lightly cooked, its austere flavor jazzed up with a gratin enriched with caramelized onions and blue cheese.

While Bavette’s atmosphere implies a history to rival America’s most venerable steakhouses, parent company Hogsalt Hospitality dates only to 2010 and the original Bavette’s in Chicago to 2012 (the name is French for flank steak). But by embracing both the old and the new, it delivers a winning mixture.