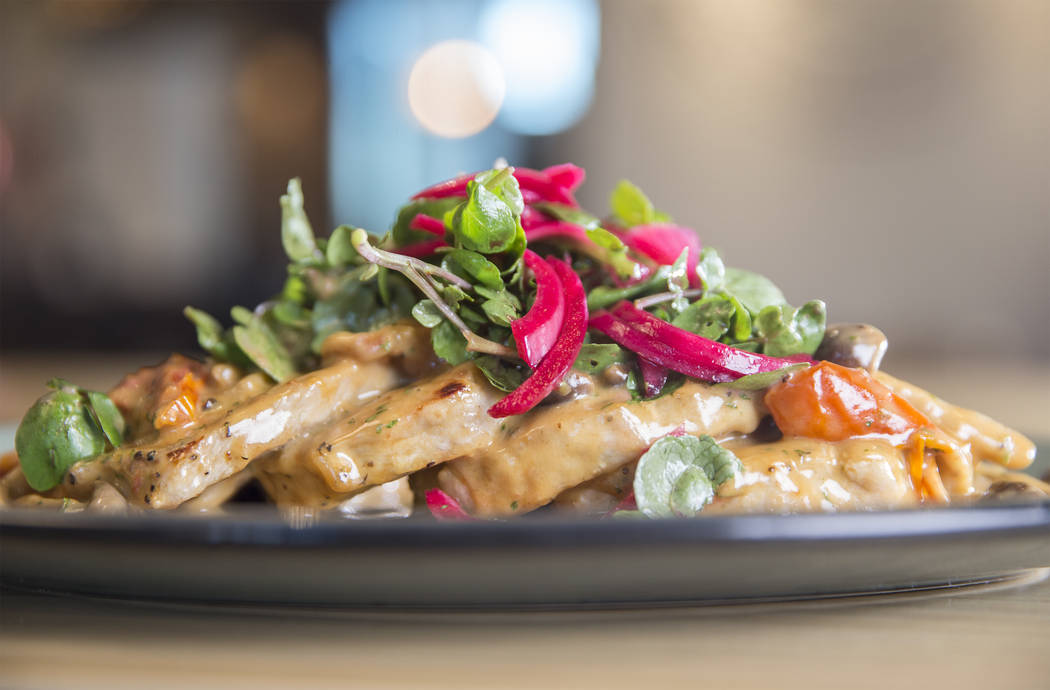 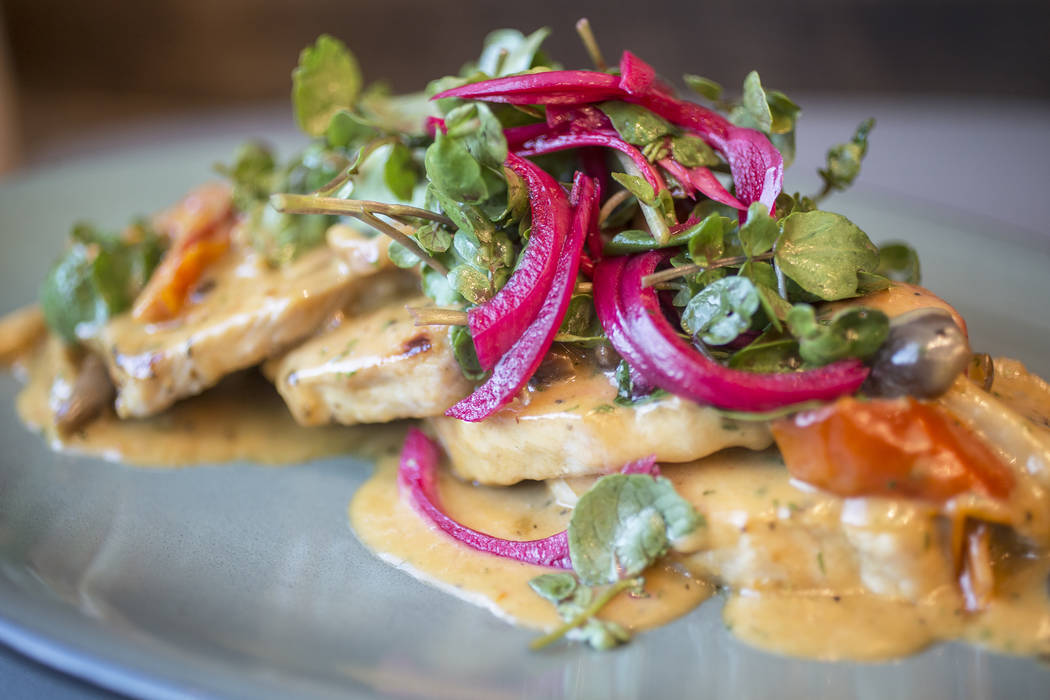 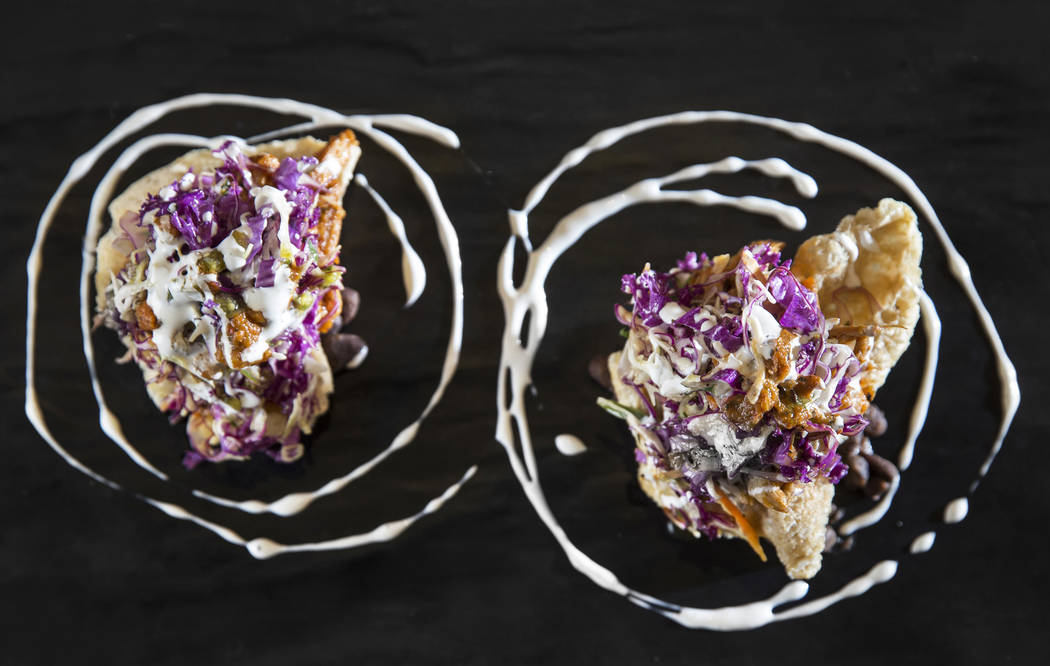 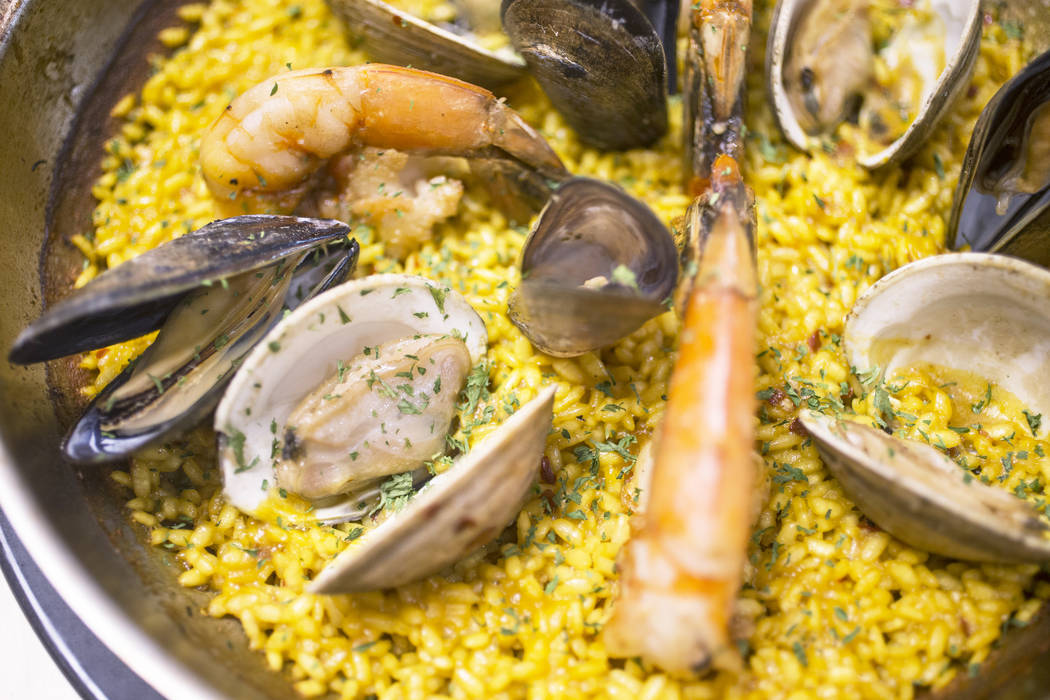 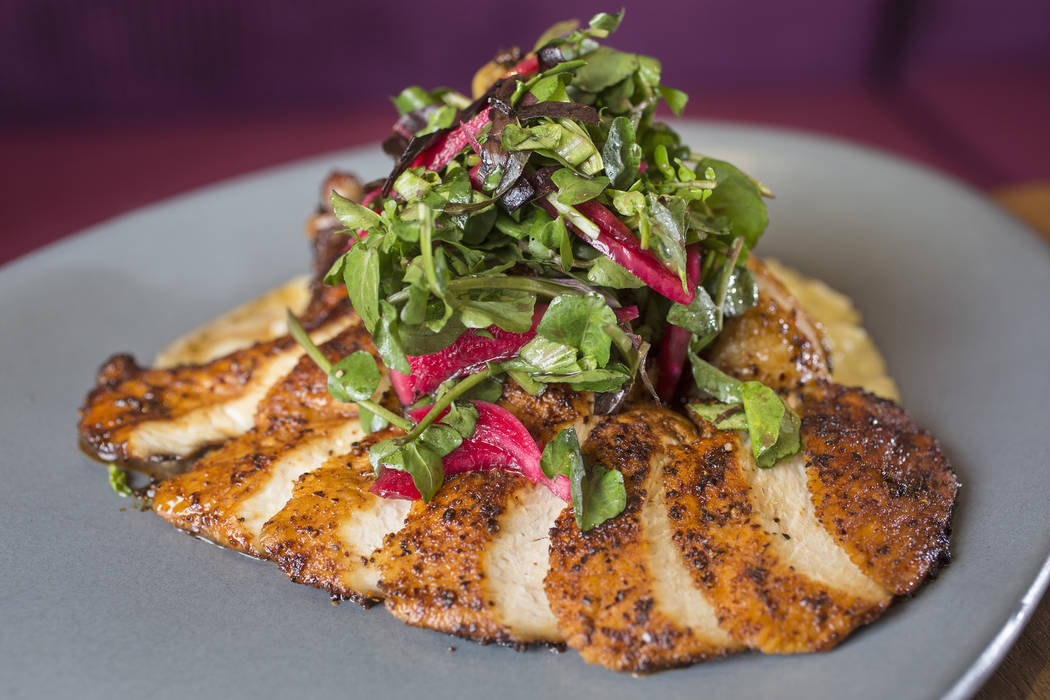 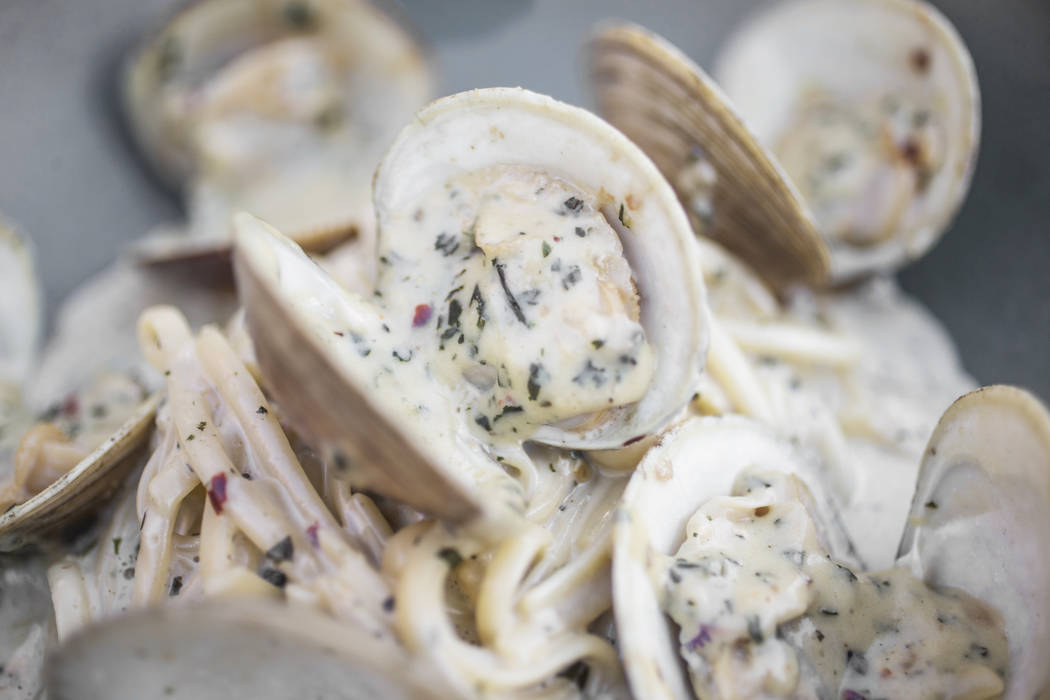 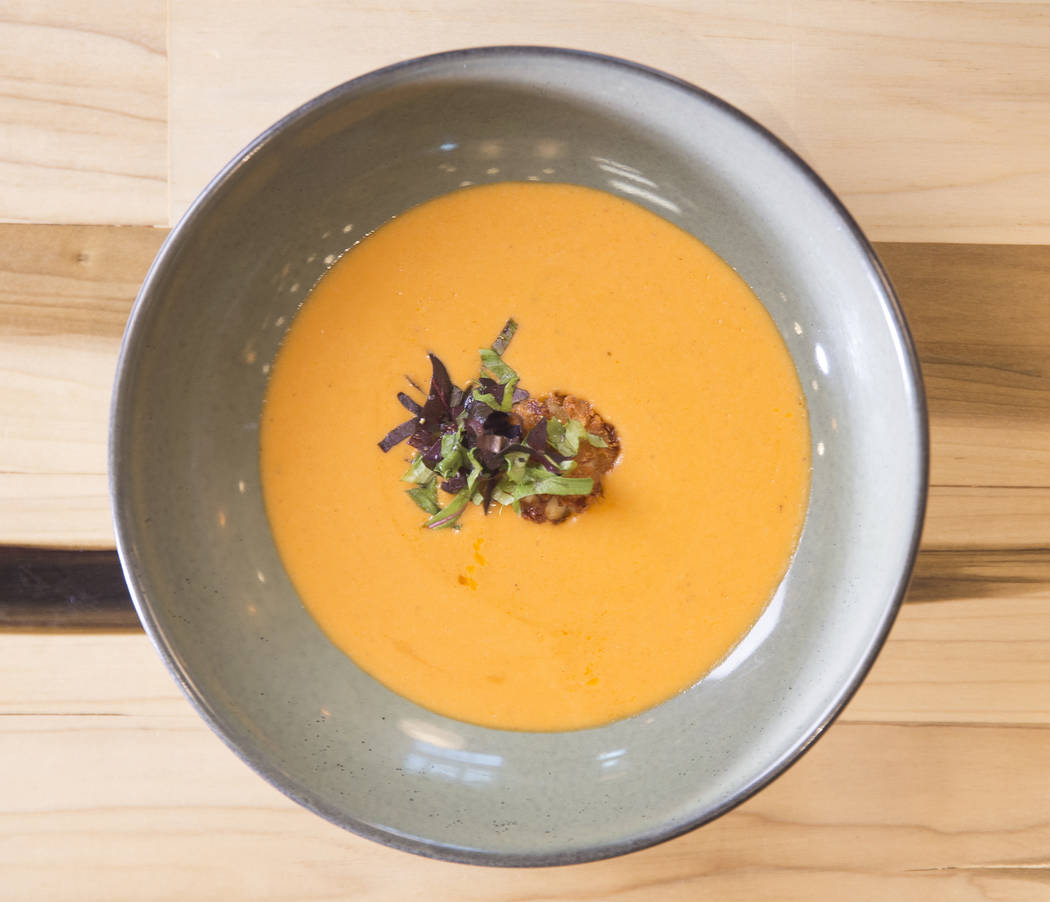 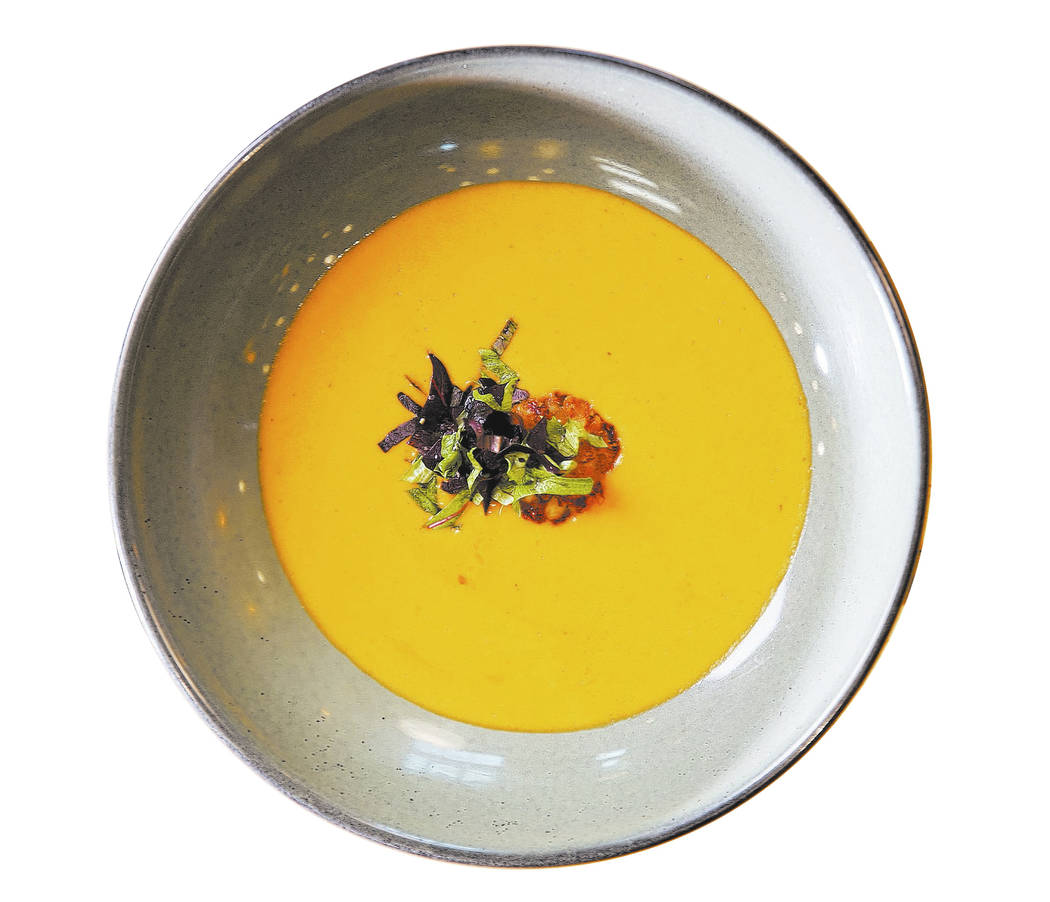 Kitchen Table Squared excels at culinary creativity. Chef Javier Chavez borrows elements from Latin and Hispanic traditions, tucking little surprises into his interpretations of the classics. But while the back of the house delivers a stellar performance, the front of the house still appears to be in rehearsals.

Consider the mixed green salad ($5), the name of which belies its departure from the mundane. Roasted tomatoes, carrots, figs, apples and sunflower seeds (lots of sunflower seeds) had been layered into a glass jar, which was deconstructed into a bowl at the table and tossed with a piquant pear vinaigrette that skillfully balanced the sweeter elements.

But the salad’s description on the menu listed white-chocolate popcorn as the first ingredient. Popcorn in savory dishes isn’t unheard of — chefs are playing with that prodigious crunch — but it is offbeat enough to draw attention, so it was somewhat surprising when the salad arrived without it. When asked, our waiter said they had run out, so the chef added more sunflower seeds and croutons. Definitely not the same — not in flavor profile or texture — and certainly not as novel as white-chocolate popcorn. Restaurants do run out of things, but when it’s a star ingredient, the dish should go on hiatus.

The salad was still good, but an entree of zabuton steak ($24) was better. Though zabuton or “pillow” steaks — named for their square shape, and cut from the upper part of the chuck — are uncommon in Las Vegas, thorough marbling packs them with flavor. The real genius of this dish, however, was that it had been sliced and served on a bed of garlicky creamed spinach and piled with wilted arugula and red onion that cut the richness. Though the steak was supposed to be served with a quail egg, it was nowhere to be seen.

Crab bisque ($8) was the kind of soup sailors dream about, filled with chunks of sweet, briny crab meat in a rich, creamy bath with a distinctive note of brandy. The promised crab fritter was absent, though, and worse, the bisque had skinned over, a sign that it had been sitting too long.

Two visits were equally beset by timing issues, beverages arriving 20 minutes after seating (one at a time) and everything that followed lagging behind. That took the sheen off an excellent starter of chicharron tostadas ($8), the crisp, bacony bases just stout enough to balance a lively layering of zesty chicken tinga, fiery jalapeno cole slaw and earthy black beans.

Onion soup ($6) was excellent. The deeply flavored veal stock was a touch worthy of Escoffier, with assertive Gruyere, and firm, mellow caramelized onions. A crispy-skinned chile-rubbed half chicken ($22) had flavor sparks from cilantro and lime. Skewers of chicken with a pineapple-chile glaze and shrimp with a garlic-lemon glaze ($21), cooked and served on a flat Himalayan salt block, were moist and thoroughly infused with flavor, the shrimp so sweet it was reminiscent of scallops.

But throughout dinner, our waiter repeatedly used words such as “long-awaited” and “finally,” not only to us but to all tables within earshot, which is never a good sign. We appreciated his extremely pleasant demeanor and profuse apologies, but there are systemic service problems at Kitchen Table Squared. The restaurant grew out of Kitchen Table in Henderson, which only serves breakfast and lunch, and there’s a lot more going on here.

But while Chavez is creating his dreamy cuisine, he needs somebody who can deliver on the details and instill a sense of urgency in the staff.

■ The essence: The kitchen gives a stellar performance, but the front of the restaurant is still in rehearsals.