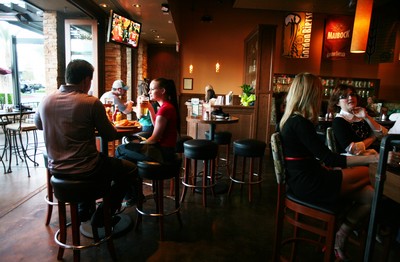 I pity, always, the restaurant server who manages to annoy the kitchen staff.

I don’t know if that was the case during our visit to the new Gordon Biersch Brewery Restaurant at Boca Park. Our waiter seemed like an affable type: polite, pleasant, even charming. But the kitchen sure wasn’t doing a lot to help him — or us, of course.

We’d finished our appetizers, the dishes had been cleared and we were waiting for our entrees to arrive. Our waiter came by to refill a soft drink and water. He came by again to apologize that the entrees were taking so long. He came by again to say he wasn’t sure why, but apparently “the kitchen has been having problems with the salmon,” which didn’t exactly instill confidence. (It was somewhat akin to, “Ladies and gentlemen, the flight has been delayed because of mechanical problems.”) But we appreciated the updates nonetheless.

Then the entrees finally arrived, and our waiter put the salmon plate on the table, produced a knife and, with a flourish, moved it from cedar plank to plate.

“I had to attend a half-hour seminar to learn how to do that,” he quipped. I think the kitchen staff should have attended a seminar, too, only one that was a lot longer.

The salmon itself was overly strong even for Atlantic salmon; I found myself wondering how much the kitchen delay had further aged it. Properly called cedar plank pecan-crusted salmon ($18.50), it is by definition an ambitious dish, and so maybe that was the problem. The honeyed pecans that constituted the “crust” were well-flavored although they were sort of big lumps instead of a crust, and we liked the dill cream sauce. If only the salmon had been handled better. And more quickly.

On the side were seasonal vegetables, which were julienned and crisp-tender, and jasmine rice — a favorite of ours — that was plain and dry to the point of being dried-out around the edges, with not much to sauce it with.

We also ordered a burger — the mushroom Swiss burger ($9.95) — mainly to get the garlic fries. Gordon Biersch’s garlic fries are justly famous; at a San Francisco 49ers game last fall we could smell them throughout the stadium and all around us were people walking around with mounds of them. Those at the new Gordon Biersch seemed a little less garlicky but still a nice departure from boring ol’ fries.

The burger was huge, at 10 ounces — too much for a normal serving; we took half of it home — its sauteed mushrooms and melted Swiss cheese just right, but the rarest the corporation’s restaurants are willing to do is medium and this one was closer to well done, which sucked all of the flavor — not to mention moisture — out of it. I well understand the inherent dangers — blah, blah, blah — of rare meat, especially rare ground meat, but one solution is to use good-quality meat and grind it in-house. Another is to at least cook it medium.

Our starters were the best part of the meal. Shrimp and chicken pot stickers ($8.95) weren’t identifiable as either shrimp or chicken but we liked them anyway, with flavor notes dominated by ginger. The plate had been drizzled with some Chinese-style barbecue sauce and some hot mustard and there was a little pile of crunchy cabbage salad on the side.

Crispy artichoke hearts ($8.95) — a Biersch staple of some years — were a wonder, positively addictive. They were grease-free and had a thin, delicate crust, and we liked the textural contrasts — whether intentional or not — within the single dish. The small, thin pieces were almost chiplike, but the larger chunks were softly yielding vehicles of unmistakable artichoke flavor.

There was a big delay, as well, before our dessert arrived. Chocolate creme brulee ($5.95) was rich and silken, but the flavor nuance delivered by the contrast of caramelized brown sugar and blank-canvas custard in the original was lost; this just seemed like a dish of chocolate custard with a crunchy top. Good chocolate custard, but you get the idea.

The new Gordon Biersch is extremely crowded, so I hear, but that wasn’t the kitchen’s excuse during our visit because we dined early on a Sunday and the restaurant was nearly empty. Considering how long it took the staff to prepare our food, I wouldn’t want to try it on a busy night.

Las Vegas Review-Journal reviews are done anonymously at Review-Journal expense. Contact Heidi Knapp Rinella at 383-0474 or e-mail her at hrinella@reviewjournal.com.