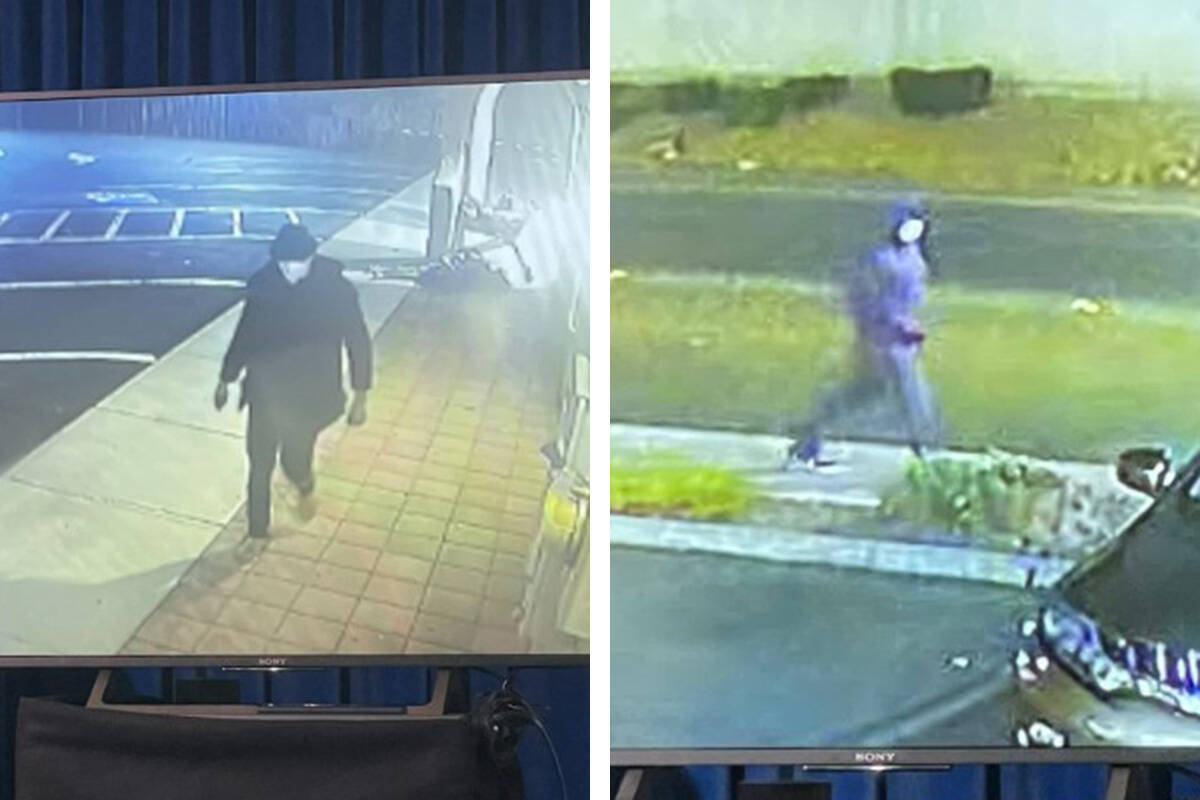 Surveillance photos of a suspect in the stabbing deaths of two women near UNLV are presented Thursday, Sept. 22, 2022, by the Metropolitan Police Department in Las Vegas. (Sabrina Schnur/Las Vegas Review-Journal) 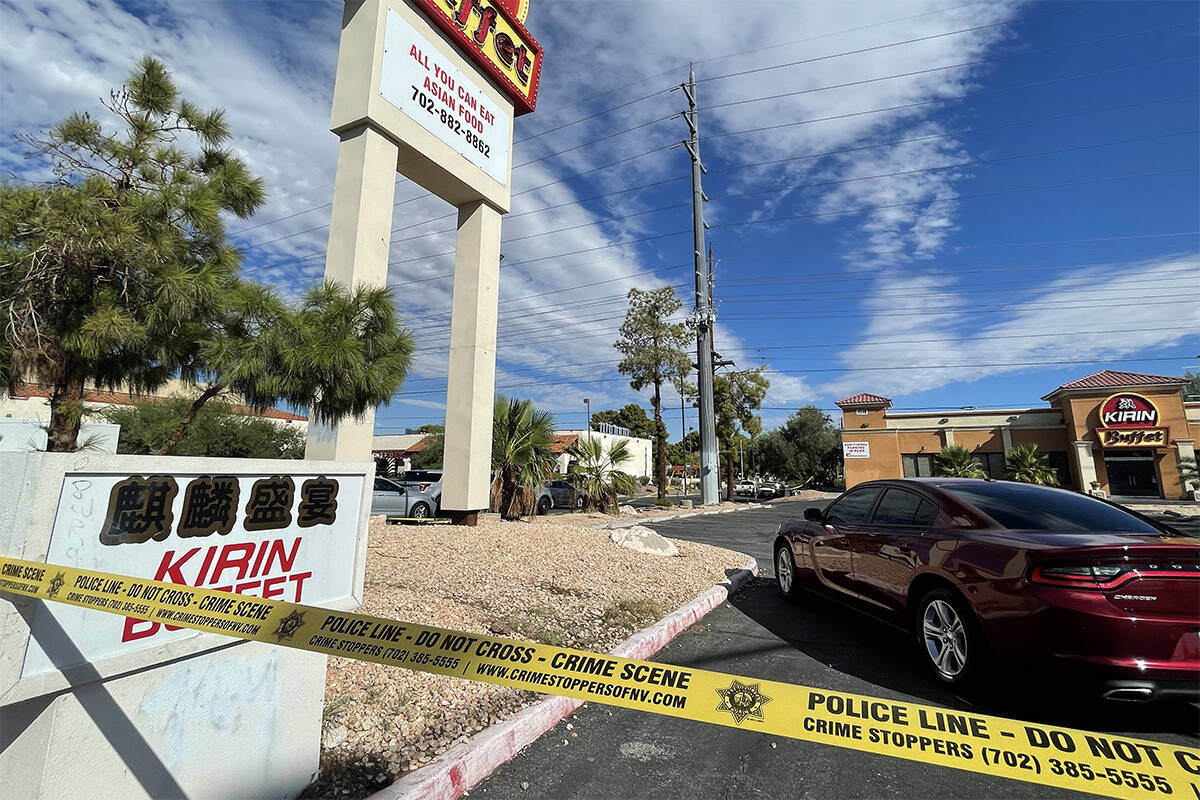 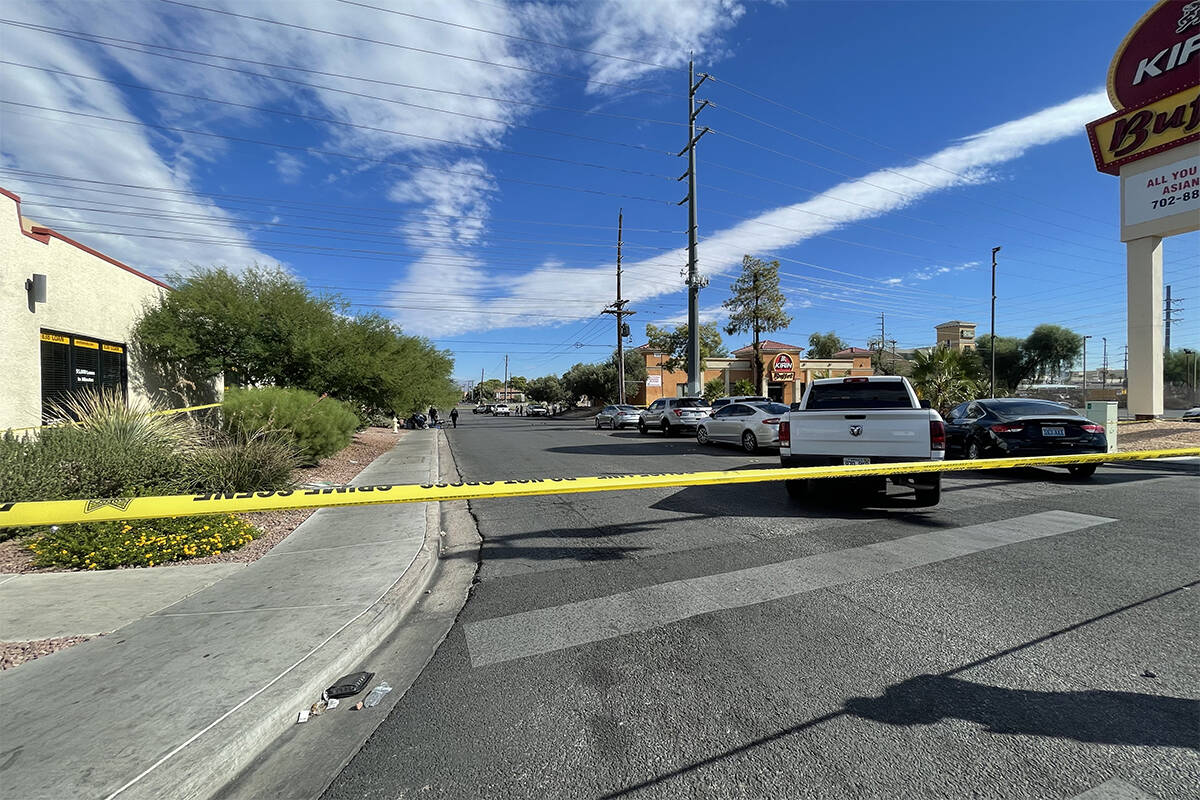 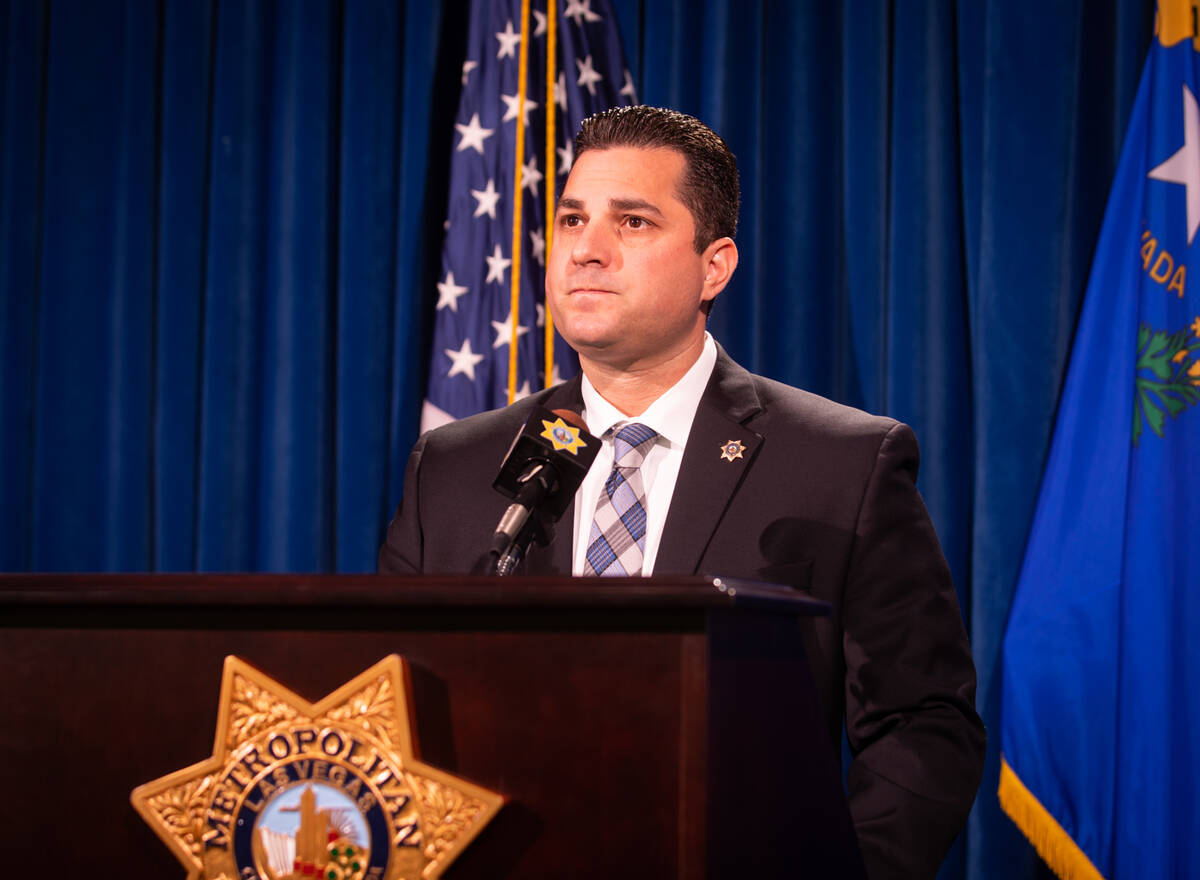 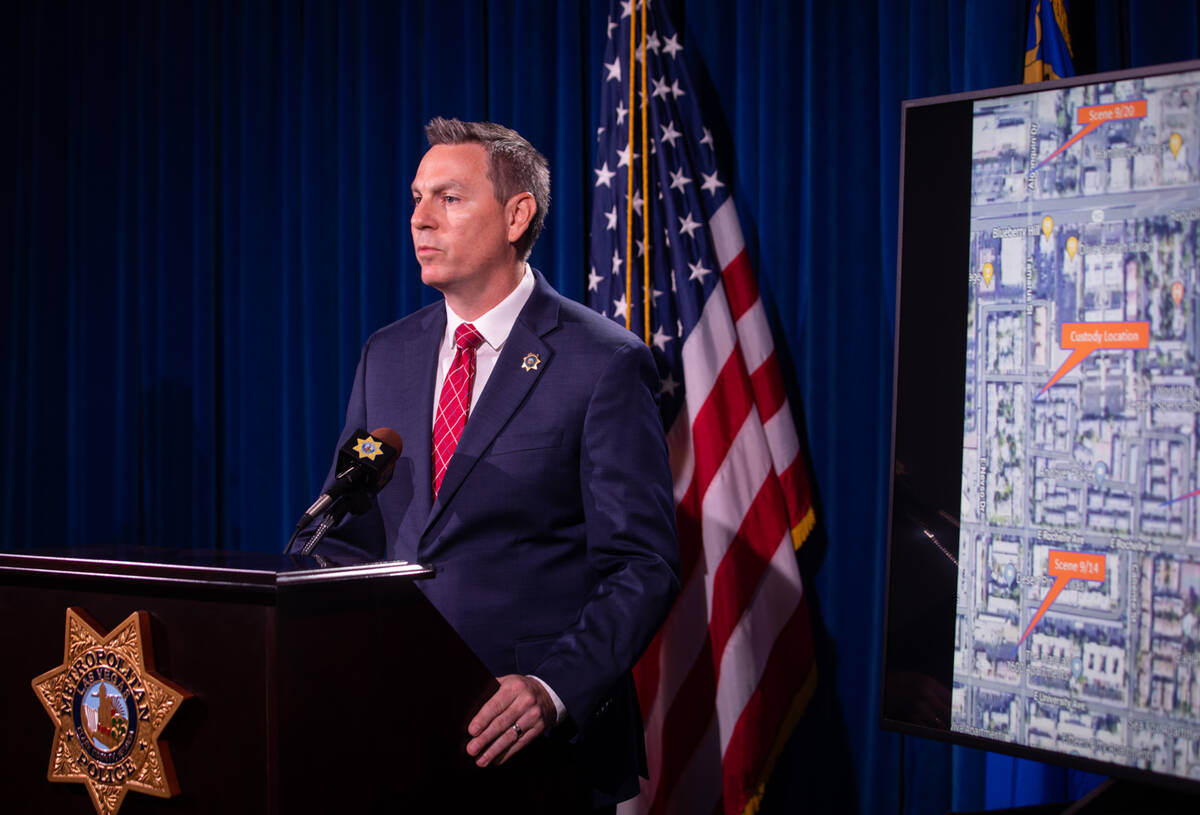 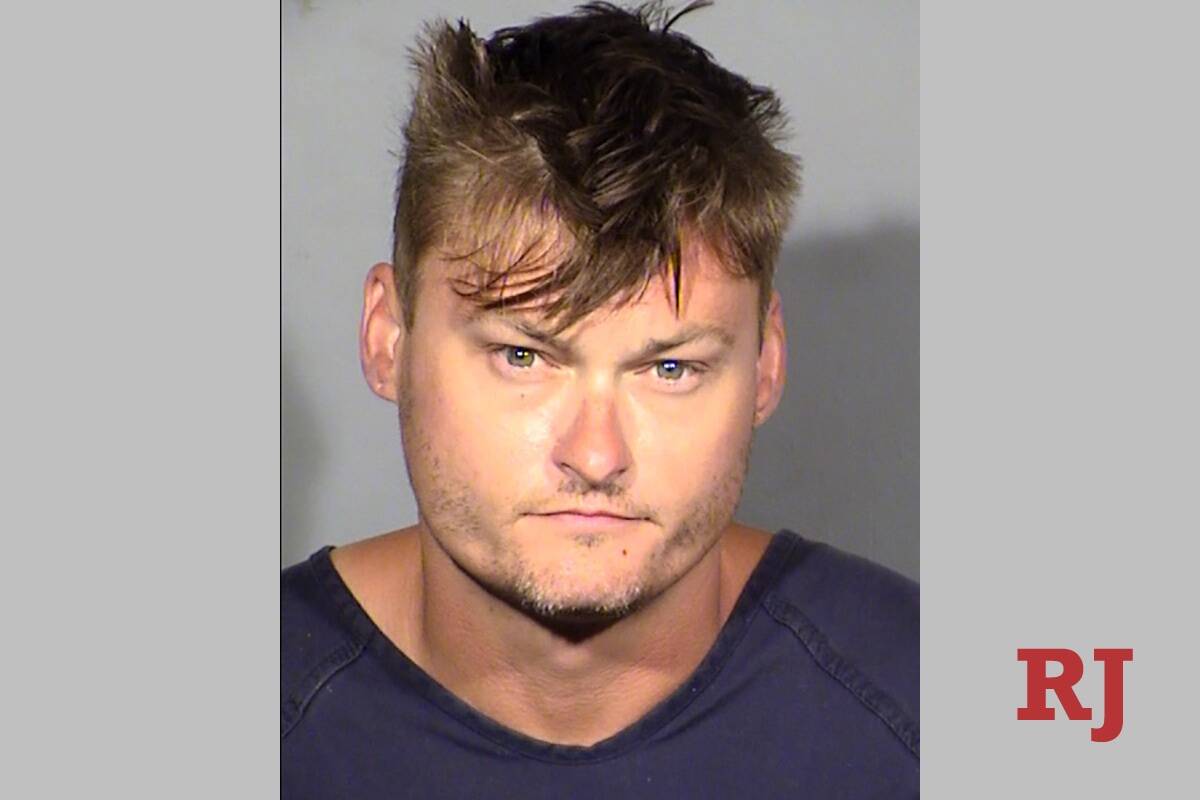 A 33-year-old man was arrested Wednesday in connection with the stabbings of four unhoused people near UNLV.

Christopher Martell was booked into the Clark County Detention Center on two counts of murder and two counts of attempted murder.

Jody Devries, 57, was found dead on Sept. 14 on the 1400 block of East University Avenue, near Maryland Parkway and Harmon Avenue, from multiple stab wounds, according to the Clark County coroner’s office.

Devries was found by the rear main door of the University Baptist Church. Witnesses saw her laying down in the morning but thought she was asleep because she was a homeless person who regularly slept on the property, according to a Metropolitan Police Department arrest report.

When she was still lying there hours later, church members approached her to try and wake her up and noticed her covered in blood.

Martell was arrested just before 6 p.m. Wednesday after police found him at the scene of another stabbing that left a man and a woman in critical condition. The woman, who was in her 30s, was pushing an elderly man in a wheelchair on the 2000 block of East Flamingo Road, Metro homicide Lt. Jason Johansson said.

A witness saw a man carrying a “combat style knife” stabbing a woman who was lying on the sidewalk. The witness saw the attacker pull the man out his wheelchair and put him on the ground.

Autopsies revealed Devries and Miller both suffered injuries to their necks and upper torsos, according to the report.

“Our team has been working nonstop since Tuesday morning on this major case protocol with little to no sleep, and thanks to their collaborative efforts, we were able to start zeroing in on a potential area for where we believed the suspect in this incidents was living,” Koren said.

Officers believe Martell lived near East Rochelle Avenue and Spencer Street based on the direction he left both stabbings. He was seen in a puffy jacket and a face mask walking away from the scene after both crimes, Koren said.

“We also coordinated with our office of community engagement who has our homeless outreach team to start doing operations in the area to contact the homeless, to advise them of what was going on but also to find out if any other homeless that live in the area have been attacked and it had gone unreported,” Johansson said.

Johansson said the suspect used the same knife in all four attacks. It remained unclear why he was targeting unhoused people.

When Martell was stopped by police he placed an 8-10 inch Wartech knife in a black plastic sheath on the ground. Martell was taken to University Medical Center to be treated for cuts on his hands before he was taken to police headquarters, according to the report.

When questioned by police, “Martell stated he was an operator with the CIA and could not discuss what he did,” the report read.

A search warrant served at Martell’s home found a black fedora-style hat, puffy jacket and tan boots with apparent blood on them that were similar to what the suspect in the Sept. 14 stabbing wore.

Police found shoes that matched those worn by the suspect in the Tuesday stabbing with drops of blood on them in Martell’s bedroom and a pair of gloves with blood on them in a hallway closet, according to the report.

Martell has prior charges of injuring or tampering with a vehicle in May. He was booked on resisting a public officer on June 5, but prosecutors did not press charges. Two weeks later he was cited for battery.

He is being held without bail and is scheduled to appear in court Thursday afternoon.