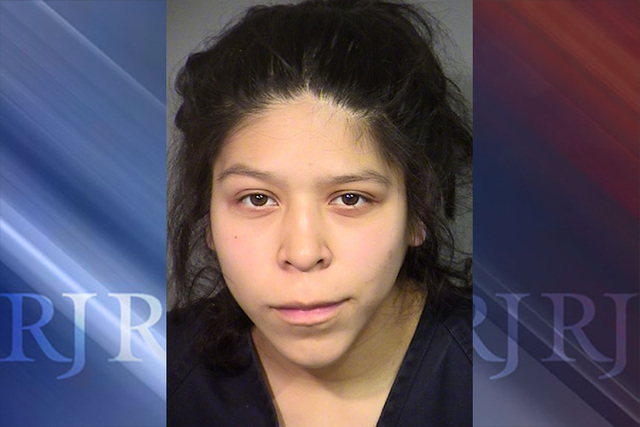 A woman arrested early Wednesday in connection with the death of a newborn girl had hidden her pregnancy from family members, police records show.

Before Veronica Salazar, 20, was arrested, she was rushed to Sunrise Hospital and Medical Center about midnight for severe bleeding from her vaginal area.

During treatment, medical staff noticed signs that Salazar had recently given birth. When asked, Salazar admitted she had given birth a baby in her bathtub Tuesday night “and left the newborn there,” the report read.

In the bathtub, the tiny girl was found dead, surrounded by blood.

Though the Clark County coroner’s office hasn’t yet determined the cause and manner of the newborn’s death, an initial autopsy indicated that child was born alive, because air was found in her lungs and stomach.

“Veronica Salazar did in fact give birth to a baby girl who took a breath and cried,” the arrest report read.

When Metro’s abuse and neglect detectives interviewed Salazar’s mother, Erica, she told police she suspected her daughter was pregnant and questioned her about it, but the daughter consistently denied her pregnancy.

Other family members suspected the pregnancy too, including an aunt also included in the police report. “The more people were inquiring about Veronica being pregnant, the more distant she became,” the mother told police, according to the report.

The report also noted Salazar has a 4-year-old son, who lived with Salazar at the mother’s Las Vegas apartment.

Before Salazar was hospitalized, her mother noticed Salazar had been in and out of the bathroom Tuesday night. At one point, she heard the shower running for about 15 minutes, which she thought was “a bit strange due to the fact Veronica does not shower at night.”

The daughter later came out of the bathroom and asked her mother to call 911. She was bleeding, and when her mother went into the bathroom, the shower curtain was closed but there was blood all over the bathroom floor, the report read.

She hadn’t yet opened the shower curtain when she heard police knock on her door.

In an interview with police, the daughter again admitted she had given birth in her bathtub, adding that the shower was running at the time. When the baby came out, she told police it “started to cry.”

She wrapped the little girl in a towel, grabbed a disposable razor and cut the umbilical cord, Salazar told police. She then put her baby back down in the bloody water, climbed out of the bathtub, “closed the shower curtain, opened the bathroom door and called for her mother to call the medics,” the report read.

She did not tell her mother or the medics about the baby, she told police. She also said “she knew her baby was submerged in water when she got out of the tub” and knew “her baby would bleed out and be gone by the time she told anybody about her.”

Salazar was later arrested on a murder charge at the hospital. As of Friday, she being held without bail at the Clark County Detention Center.

She is due in court Monday.