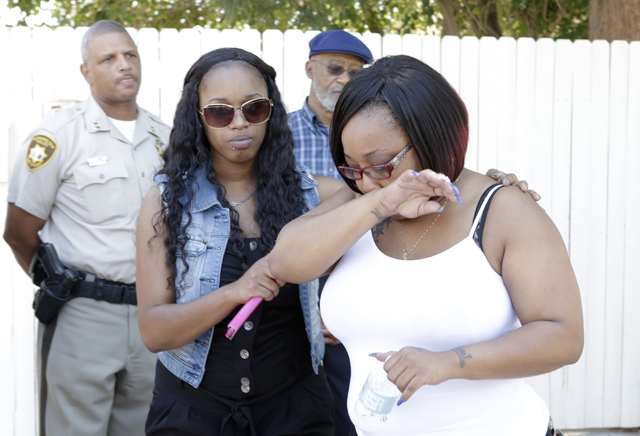 Veronica Gaston, left, and Latoya Carroll, sisters of murder victim Lashunda Carroll, and Morty Cornell Young, get emotional after speaking to the media Tuesday, May 31, 2016, in front of the apartment complex where three people, including Carroll and Cornell, were found shot dead on Dec. 7, 2015, in Las Vegas. Bizuayehu Tesfaye/Las Vegas Review-Journal Follow @bizutesfaye 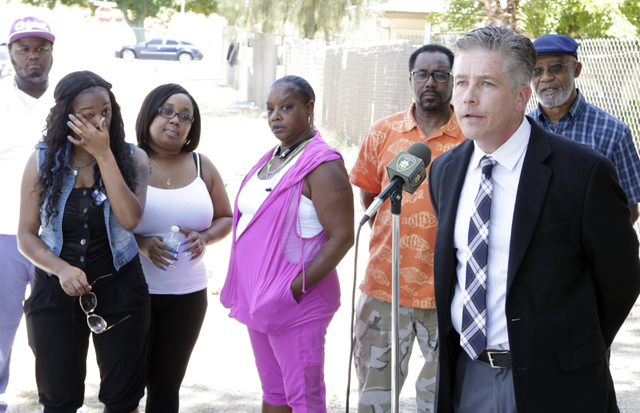 Veronica Gaston, left, and Latoya Carroll, second left, sisters of murder victim Lashunda Carroll, and Morty Cornell Young, listen as Metro Lt. Dan McGrath speaks about an arrest made in a triple homicide as he briefs the media on Tuesday, May 31, 2016, in front of the apartment complex where three people, including Carroll and Young, were found shot dead on Dec. 7, 2015, in Las Vegas. The suspect, Gerald Pointer, not photographed, was arrested in Chicago. Bizuayehu Tesfaye/Las Vegas Review-Journal Follow @bizutesfaye 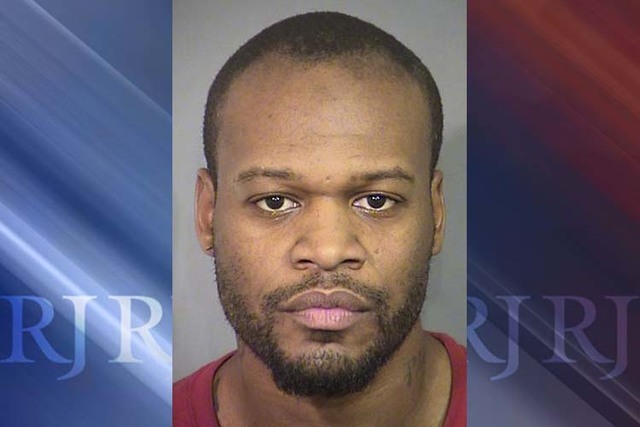 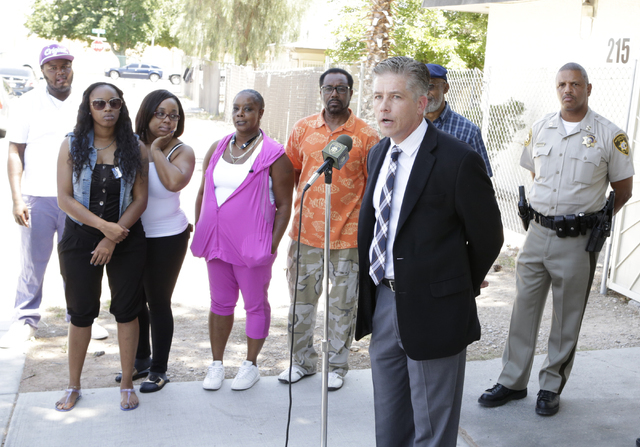 Metro Lt. Dan McGrath speaks about an arrest made in a triple homicide, as he briefs the media on Tuesday, May 31, 2016, in front of the apartment complex where three people were found shot dead on Dec. 7, 2015. The suspect, Gerald Pointer, not photographed, was arrested in Chicago. Bizuayehu Tesfaye/Las Vegas Review-Journal Follow @bizutesfaye 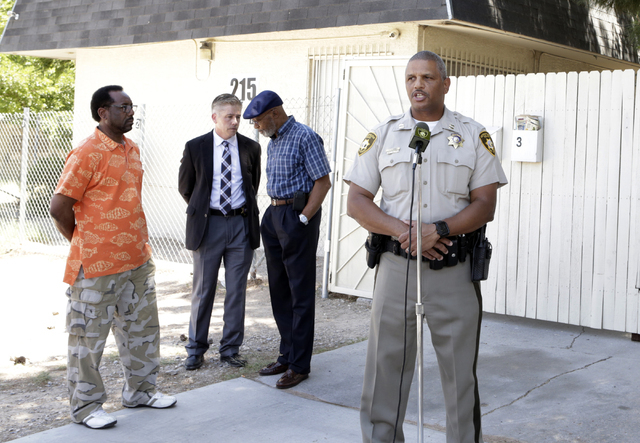 Las Vegas police Capt. Robert Plummer speaks about an arrest made in a triple homicide, as he briefs the media as Metro Lt. Dan McGrath, second left, talks to community organizers on Tuesday, May 31, 2016, in front of the apartment complex where three people were found shot dead on Dec. 7, 2015, in Las Vegas. The suspect, Gerald Pointer, not photographed, was arrested in Chicago. Bizuayehu Tesfaye/Las Vegas Review-Journal Follow @bizutesfaye

The friends and family of three people killed in execution-style shootings last year gathered in a West Las Vegas neighborhood Tuesday to hear some good news.

The Metropolitan Police Department announced that the suspect from one of the deadliest incidents of 2015 was in custody.

Gerald Pointer, 38, was arrested March 16 in Chicago for violating parole for a robbery charge, but police say Pointer is their sole suspect in the homicides, too. Pointer is now an inmate at High Desert State Prison under the alias Leroy Greenwood.

On the night of Dec. 7, DeAndre Leggett, 38, was found dead in an apartment kitchen along with Charlita Lashunda Carroll, 35, and Morty Cornell Young, 37. Las Vegas police responded just before 6 p.m. to the 205 Jackson Ave. apartment, near Owens Avenue and D Street.

Just shy of six months later, the victims’ loved ones surrounded the investigators who closed the case, detectives Travis Ivie and Tate Sanson.

“We never gave up,” Ivie said.

“You promised me you wouldn’t,” replied Leggett’s sister, who asked not to be named.

Police have called the incident a senseless shooting, possibly related to a drug robbery, and have stressed that no fight was involved, just a quick series of shots that left three people lifeless on the floor.

Lt. Dan McGrath, of Metro’s homicide unit, said the victims were forced to lie on the ground and were then shot in the head.

“Nobody deserves to be executed … over a small amount of drugs,” he said.

Police had few details to release in December, saying only that a 6-foot-4-inch black man wearing all black was seen approaching the apartment from a nearby alley shortly before the shooting and running away afterward.

Now the victims’ families are relieved to have some answers.

“We’re all still hurt by this situation, but the fact that we got some closure is a blessing,” Devonta Diggs said. “There’s still some questions left unanswered, but I guess we have to leave that up to God.”

Carroll’s sister, Latoya Carroll, said her sister was a good person, despite media reports that tied her sister to drugs.

“She was loving. She was caring,” she said as tears welled in her eyes. “Everybody makes mistakes. They didn’t deserve any of this.”

For Capt. Robert Plummer of Metro’s Bolden Area Command substation, the deaths were a call to action. His station rushed to partner with nearby faith groups New Jerusalem Church and Muhammad Mosque 75 to create the “D Street Strong” project.

About 35 volunteers from the churches walk through the neighborhood on Mondays and Saturdays to identify the people most in need and get them help. These community partnerships are an important component of crime prevention, according to Bishop James M. Rogers, of New Jerusalem Church, and police.

“We love our community,” Rogers said. “They are not here alone.”

The only other triple homicide last year occurred in March, when a man shot three people dead before turning the gun on himself in a murder-suicide incident just east of Summerlin.