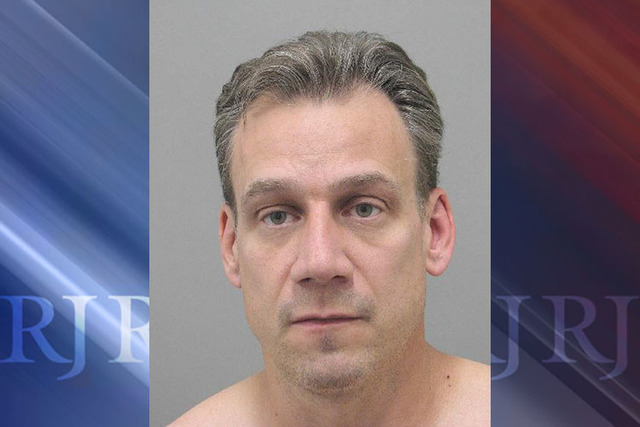 A Henderson man accused of stabbing his wife to death while their three young children were home had previously been arrested for attempted murder and convicted of battery with a deadly weapon, records show.

Police were dispatched just before 5 a.m. Saturday to a Henderson home in the 500 block of Kristin Lane, near Sunset Road and Boulder Highway, the arrest report shows. Michael Kaplan, 48, had called to report a woman was sick or hurt, police said, and had told police dispatch that “he was unsure if he hurt the female on accident or on purpose,” the arrest report said.

According to the arrest report, Kaplan had initially denied knowing the woman, but later said she was his wife; police dispatch “could also hear a baby crying in the background,” the report said.

Officers arrived at 5:05 a.m. while Michael Kaplan was still on the phone with the police dispatcher; the dispatcher told Kaplan to leave the home with his hands empty and up, but according to the arrest report, he refused.

Two minutes later, Kaplan left the home through the front door and officers arrested him. When he was handcuffed, the arresting officer said, Kaplan had “blood all over his hands,” the arrest report said.

About 6:20 a.m., detectives arrived and found Amanda Kaplan’s body facedown in the bathroom of the second-floor master bedroom; the body “gave the appearance that she had been clutching at her midsection,” the arrest report said.

Detectives said Amanda Kaplan had been stabbed in bed with a kitchen knife, and that she likely headed toward the bathroom before collapsing, the arrest report said.

At 7 a.m., detectives recorded an interview with Michael Kaplan after moving him from a patrol car into an unmarked detective car, where he was read his Miranda rights. He declined to speak with the detectives, the arrest report said.

The arrest report said Michael Kaplan didn’t explain how Amanda Kaplan died, and had “no fresh cuts” that would explain the blood on his hands, feet and midsection. There were no signs of forced entry, and the only other people home were their minor children, ages 7, 3 and 3 months, the arrest report said.

In October 2000, Kaplan was charged with attempted murder with a deadly weapon, home invasion and burglary, court documents show. He pleaded guilty to battery with a deadly weapon and was sentenced to probation “for an indeterminate period of time” not to exceed five years. Kaplan was also required to maintain contact with a “mental health-treating doctor” and to take all prescribed medications, according to court documents; failure to do so would cause his probation to be revoked.

On Saturday, Kaplan was booked into the Henderson Detention Center, where he faces one charge of murder with a deadly weapon.