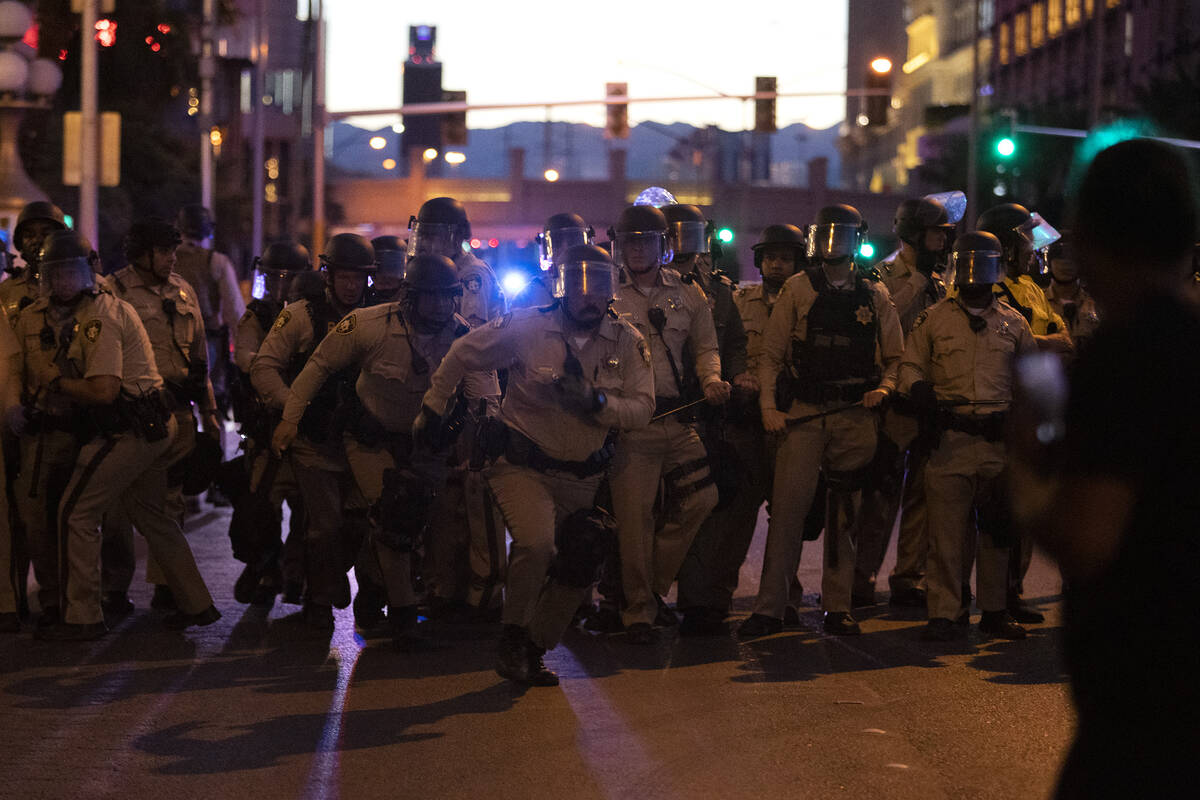 Las Vegas police officers run toward the crowd of protesters who took to the Las Vegas Strip in support of George Floyd, a Black man killed by Minneapolis police earlier in the week, on Friday, May 29, 2020. (Ellen Schmidt/Las Vegas Review-Journal)

A woman arrested two years ago during a Black Lives Matter protest near the Strip has filed a federal lawsuit against the Metropolitan Police Department, claiming officers used excessive force and arrested her in retaliation for protesting.

Alexandria Devore was arrested after a protest on July 4, 2020, at a Metro station just south of the Strip, at 4860 Las Vegas Boulevard South, according to the federal lawsuit filed Friday. Devore said that officers recognized her from previous protests and targeted her because she was with a car that had Black Lives Matter messages written on it.

“At a July 4, 2020, protest against police brutality and systemic racism, Plaintiff Alexandria Devore experienced first-hand the injustices she was protesting against,” Devore’s attorney, Maggie McLetchie, wrote in the lawsuit. “Ms. Devore’s attempts to exercise her First Amendment rights were thwarted when Metro officers followed her and fellow protesters and threatened to cite them with spurious charges.”

Metro declined to comment on the suit on Tuesday because of pending litigation, spokesman Larry Hadfield said.

Devore had either attended or helped organize nearly every Black Lives Matter protest in Las Vegas during the summer of 2020, according to the lawsuit. Demonstrations were held in the valley and across the country that summer in the aftermath of the murder of George Floyd at the hands of Minneapolis police.

According to the lawsuit, officers had “singled out” a car Devore had ridden in, which was decorated with Black Lives Matter messages and parked with other cars near the “Welcome to Fabulous Las Vegas” sign.

The vehicle was the only one painted with the Black Lives Matter slogans, and police targeted the car because of the messages, McLetchie wrote in the suit.

Devore alleged police had recognized her earlier in the protest because she had driven the car at previous demonstrations. She told officers she couldn’t move the vehicle because another protester had the keys.

As she was walking with her friend to find the protester with the keys, officers pulled up in a police vehicle and told the women to get in front of the van.

“Ms. Devore asked the officers why they were threatening to detain her,” the lawsuit said. “Without answering, multiple officers charged at her, threw her against the police car, and handcuffed her.”

Officers told Devore she was going to be cited because she had walked into the road, but the lawsuit said Devore “had made a concerted effort all night to avoid breaking the law against walking on roads.”

According to the lawsuit, Devore saw officers at the Clark County Detention Center “laugh while over-rotating and nearly breaking the wrists of an already-handcuffed Spanish-speaker attempting to comply with their English commands.”

When Devore told the officers they were hurting the man, one officer put Devore in a small cell “apparently designated for the more ‘disturbed’ detainees.”

Another woman touched Devore inappropriately multiple times while she was in the cell, but guards ignored requests from multiple people to remove the woman, according to the lawsuit.

Two months after her arrest, the district attorney’s office declined to pursue charges against Devore, the lawsuit said. There were 240 people booked into the Clark County Detention Center on charges related to the protests that stretched from May to October 2o20, but charges were dropped for the majority of those arrested.

The protests have spurred multiple lawsuits, including two Las Vegas couples who recently filed lawsuits alleging police used excessive force against them while they were bystanders at a Strip protest.

In Friday’s lawsuit, McLetchie wrote that the police response was “substantially more aggressive” during the Black Lives Matter demonstrations when compared with protests that were not critical of police, such as protests against face mask policies during the beginning of the COVID-19 pandemic.

Since her arrest, Devore has stopped actively participating in protests and instead teaches classes about police reform, according to the lawsuit.

“Ms. Devore suffered through these violations — of her body and of her civil rights — due to her wrongful arrest brought in retaliation for exercising her First Amendment right to speak out about police brutality and systemic racism,” McLetchie wrote.