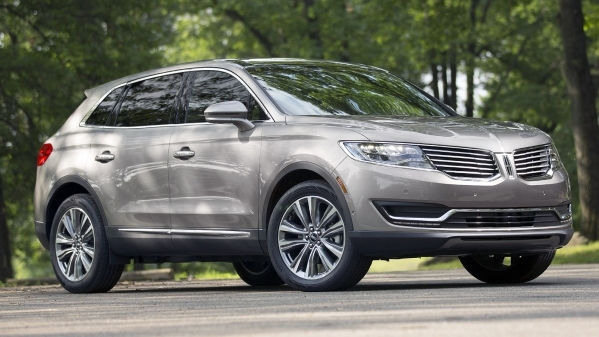 The Lincoln MKX has been completely redesigned for 2016.

The revitalized MKX traditionally has been an up-level offshoot of Ford’s Edge. For its third iteration, the tall wagon receives a mildly altered body with more curves and creases and a restyled taillight bar extending the full width of the liftgate.

Lincoln’s signature winged grille swaps out its fang-like vertical bars for a set of more elegant horizontal blades. Beneath the sheet metal, Lincoln has stiffened the chassis, upgraded the suspension and added more sound insulation (including an acoustic windshield and front side glass). The interior receives reshaped leather-covered front seats with four-way adjustable headrests.

According to Alan Rothenberg, sales and leasing consultant product specialist at Findlay Lincoln of Las Vegas, the 2.7 liter V-6 eco-boost engine gives the driver V-8 power with the fuel economy of a V-6.

Both engines are connected to six-speed automatic transmissions with Drive and Sport modes. The latter allows the engine to rev higher between shifts and also lets the driver manually control the downshifts that are matched to engine revs. The available all-wheel-drive directs 100 percent of the engine torque to the front tires under normal operating conditions, but can also send up to 100 percent to the rear if the fronts start to slip.

In the cab, the control panel is much classier looking, although the increase in switchgear — where other luxury models are cutting back — seems incongruous. The gear shifter has been replaced by push-button controls located beside the touch-screen display.

“All Lincolns also come with six months of complimentary satellite radio and voice-activated navigation, which is on the main 8-inch screen,” he said. “What’s unique about this model is that there’s a push-button shift so you can shift the car with a push of a button on the dash.”

The first, Premiere, comes with standard features and gets 17 miles per gallon in the city and 26 on the highway.

Select has blind-spot indicators and cross-traffic sensors to alert the driver when someone is in their blind spot as well as additional upgraded features.

Reserve features voice command, a hands-free liftgate sensor, premium leather-wrapped steering wheel with cruise control, audio, climate and media controls as well as a panoramic roof on the entire top of the car.

“The whole top of the car is glass so it’s like driving a convertible but with glass over it,” Rothenberg said. “The driver portion opens and there’s a power shade over the rest of the roof that will open and close without touching it.”

The last level of MKX is Black Label, which Rothenberg said is for the customer who wants the ultimate in luxury.

“We have a separate exclusive showroom for people to explore the materials that are exclusively used on the Black Label models,” he said of Findlay Lincoln of Las Vegas. “There are themes, not just colors, which have been chosen by Lincoln’s interior specialists and center around colors, materials and exotic woods.”

In addition to select materials, consumers who opt for Black Label receive pickup service when they need an oil change or routine maintenance as well as a drop-off loaner car while the service is being performed.

Rothenberg said the Lincoln MKX is a great option for someone who doesn’t necessarily want an SUV but doesn’t want a car either.

“It’s for a person who needs the cargo space of an SUV but prefers the ride of a touring sedan,” he said.

According to Rothenberg, drivers enjoy having two engine options and the fact that the car uses regular gasoline.

“It’s been very well received and people who have driven it in the past say it’s the best apparition of the vehicle since it came out,” he said. “This is our most popular model.”

— Wheelbasemedia.com contributed to this story.