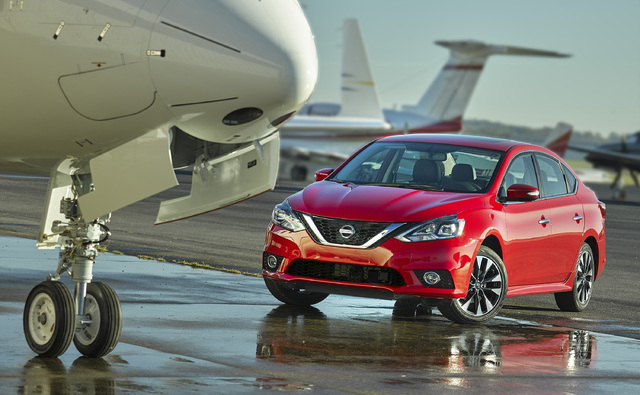 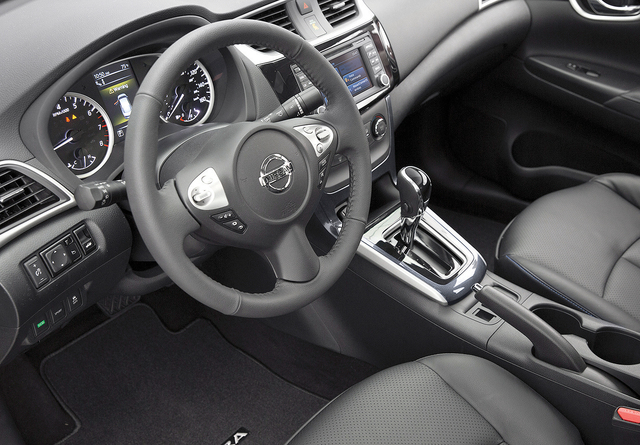 COURTESY NISSAN The base cars are price focused but are still reasonably well turned out. Leather and a better stereo offered much farther up the line, complementing a handsome interior refresh.

In this time of cheap gas and automakers’ focus on larger, more profitable trucks and so-called crossovers (tall wagons), compact sedans such as the Nissan Sentra have to fight for your attention. This is where regular updating comes in handy.

As with some people, going under the knife for some tightening and tweaking is a popular tactic in the automotive industry. It’s done to increase competitive advantage and marketing muscle and also to showcase mechanical and technical innovation or introduce new or modified trim levels and options.

This is mostly the case with the Sentra, starting with a complete nose job (grille, headlights, fenders and hood) and rear-end treatment that brings the car more in line with the larger Altima and Maxima. New 16- and 17-inch wheel designs add an exclamation point to the makeover.

The car’s bolder visual statement is complemented by an interior redo that includes a new floor console, control stack and a steering wheel that looks very similar to what’s installed in the Nissan 370Z sports car. Additionally, new seat fabrics plus increased applications of soft-touch materials for the instrument panel and armrests give the car an upscale appearance. The alterations make an already quite livable (and roomy) cabin a more pleasant spot.

Additional passenger enjoyment will be felt, quite literally, from the firmer suspension that aims to rid the car of excess wallowing on rough surfaces and reduce body lean while cornering.

There’s also Active Understeer Control whereby light braking pressure is applied to the inside front wheel during cornering. The idea is to help the car turn on its own (for greater stability) and reduce understeer, which is the natural tendency for a vehicle to continue in a straight line even when the steering wheel is turned.

“It’s sleeker and a lot more appealing to the eye,” he said. “It’s more attractive and our customers have definitely been responsive to it.”

VanNess said the Sentra is definitely not cookie cutter.

“It’s fuel efficient and it’s not boring at all,” he said. “It has very aggressive styling and buyers won’t be disappointed by the way it looks; they’ll be happy when they get in it.”

He added, “It’s a great option for an entry buyer in need of something for everyday or a retiree who needs to get around town. It’s a great car and it looks good.”

Carried over from 2015 is the Sentra’s 130-horsepower 1.8-liter four-cylinder engine that’s connected to a six-speed manual transmission or available continuously variable (CVT) unit. The powerplant is one of the more modest performers in the class, but at least the CVT now acts a bit more like a traditional multigear automatic, which will be welcome news for many drivers.

Unfortunately for the dwindling numbers of manual-transmission supporters, Nissan only offers the six-speed gearbox in base Sentras, likely as a way to keep the vehicle’s $17,700 base price (including destination charges) in check.

On the plus side, the CVT — called Xtronic in Nissan lingo — plus a vehicle curb weight of less than 3,000 pounds, helps the car achieve a respectable 29 mpg in city driving and 38 on the highway. That increases to 30/40 when the FE+ S model is specified. The manual-transmission cars are rated at 27/36.

Base Sentra S models roll off the factory floor fairly well turned out, although old-school drum brakes (in place of discs) are installed at the rear, cruise control is deleted and the wheels are steel and not alloy.

That missing content is part of the SV trim level that, along with the CVT, adds push-button start, a rear-view camera, 5-inch display screen and an upgraded interior.

Moving up to the SR model gets you added side body trim, rear spoiler, heated front seats and outside mirrors and fancier interior trim.

The top-end SL includes dual-zone climate control, leather-covered seats, a 5.8-inch touch-screen with a navigation system and some (but not all) of the latest active-safety technology. Automatic emergency braking is optional, for example. And you’ll still have to pay extra for the premium Bose audio system and a power moonroof.

Still, Nissan gets full marks for being one of the first automakers to recognize that buyers of smaller cars still want some of the niceties that were previously reserved for larger, more expensive models. Now that the rest of the field has caught on, Nissan has stepped up with improved style and packaging that won’t go unnoticed.