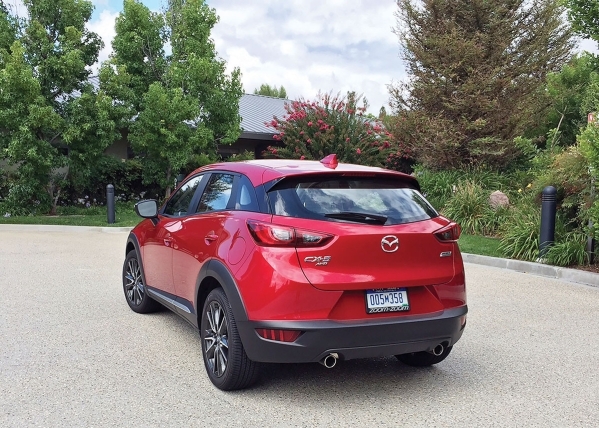 The CX-3 is Mazda‘s attempt to introduce a not-too-big, not-too-small car to slot between the existing Mazda3 and the CX-5. COURTESY PHOTO

The crossover segment is on fire, which means everyone is trying to introduce the next big thing to lure all those buyers. The CX-3 is Mazda’s attempt to introduce a not-too-big, not-too-small car to slot between the existing Mazda3 and the CX-5. Does this small crossover have what it takes?

Mazda has something of a reputation for being fun to drive, and the CX-3 looks the part. It a small crossover, but with beefy 18-inch wheels. Black fender flares make them look even bigger, and the front end design gives it a low, sports car look. At every angle, it’s a crossover that’s hiding something more beneath its skin.

That something more is a Mazda four-cylinder, 2-liter Skyactive engine with 146 horsepower and 146 lb-ft of torque paired to a six-speed automatic transmission. Those numbers aren’t impressive, but this is a Mazda, so what they do with those numbers is far more than you might expect.

“A few customers have been shocked at horsepower and performance of the vehicle,” said Sergio Brooks, a sales agent at Herderson Mazda. “Another customer was shocked by the feel of the car for the price. He said it felt like more of higher-priced car.

“Mazda really has accomplished its niche goal with the CX-3. It goes up against the Chevy Trax, Honda HRV and the new Subaru Crosstrek, and it has the highest fuel economy and more standard features than all of them.”

Brooks said optional features in a fully loaded CX-3 (for about $30,000) include adaptive cruise control, heads-up display and cross-traffic detection. He said it is one of the only vehicles in its class to offer blind-spot monitoring.

All the high-tech and toys aside, any crossover contender must come fully loaded with grit. And that wasn’t lost on Mazda designers.

“People really like the aggressive, sporty look of the car. That’s why people go to our Mazda,” Brooks said. “It has a sportier look than a lot of the competition. But people are liking the overall drive of the vehicle. The like the fit and finish.

“The new compact SUV is a new market. Mazda is testing the market to see how it will do. It’s dong very well right now.”

Our drive took us through winding California roads the day after driving the new 2016 Mazda MX-5 Miata. The pressure was on, and our expectations were firmly in check.

What we got was a surprisingly fun crossover. No, it’s not the MX-5 Miata, but the CX-3 handled the road confidently. There is no manual option, but the automatic shifts are smooth and fast. There is also a sport mode that allows high revs that will hold as long as you want for more spirited driving.

Your fuel economy will suffer when you’re in sport mode, so if that’s your priority, leave that button alone. You’ll still have an enjoyable, responsive ride that achieves 29/35/31 city/highway/combined in the FWD variant or 27/32/29 if you go for the AWD model.

The low horsepower is only occasionally an issue, most noticeably when hitting the gas hard going uphill. It takes a split second longer than we’d like to react, but once it knows what you want, the CX-3 quickly gets its act together and sprints forward.

The electric power steering offers a moderate amount of road feedback. If this were a Miata, it would be disappointing, but this is a crossover so it feels in line with similar vehicles like the Jeep Renegade or Fiat 500X.

There is also an an available heads-up display that has a plastic screen/flap that pops up on the dash in front of the driver.

The heads-up display is great, but the little piece of plastic is odd. It looks like it should manually fold, but if you try, you risk snapping it clean off, so be warned.

An extensive suite of safety features is available based on the model you select. Standard features include a rear camera and a tire pressure monitoring system. Available options include lane departure warning, rear cross traffic alerts, radar cruise control and blind-spot monitoring.

There are three different models starting with the $19,960 Sport that lets Mazda proudly say the CX-3 starts at under $20,000. Next up is the Touring at $21,960, and it tops out with the Grand Touring at $24,990. The numbers go up, but they stay manageable, making this a real contender in the crossover marketplace.