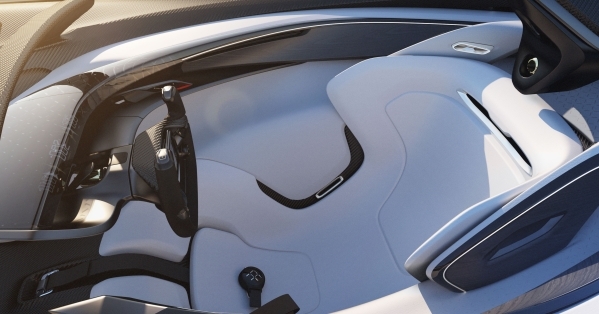 The design of the Faraday Future FFZero1 concept car uses aero-tunneling to channel air flow through and around the vehicle to minimize drag and also cool the electric car battery pack at the same time. COURTESY 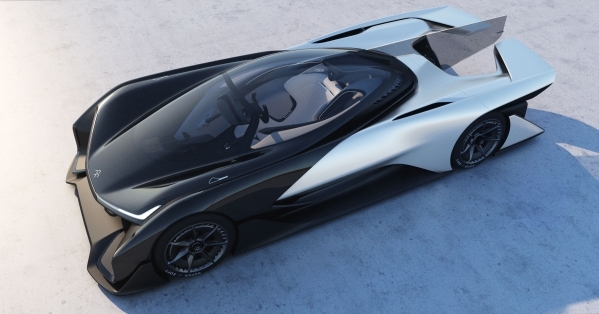 Faraday Future announced last month that the company will be building electric cars in North Las Vegas over the next decade, investing in a billion-dollar factory at the Apex Industrial Park. On Monday, the company unveiled its new FFZero1 concept car in Las Vegas, just in time for the annual CES international technology trade show.

Nick Sampson, senior vice president for research and product development, was the moderator for the new car rollout.

Sampson noted that the company has only been in existence about 18 months but already employs 550 people in Southern California and another 200 people worldwide, having recruited top talent from BMW, Audi, Jaguar, Lotus, Tesla Motors, SpaceX, NASA, Apple and Google.

The company’s transformative vision has been to actively rethink what mobility means to a driver, including the interior design of the vehicle, customizable user interfaces, connected mobile communication, efficient powertrain technologies and composite materials for reduced weight, while also providing enjoyment, reliability and safety.

Strong alliances with Nevada and North Las Vegas were cited, as Gov. Brian Sandoval and North Las Vegas Mayor John Lee were recognized while sitting in the audience. The company’s investors in China are not only providing capital but also opening doors to the Chinese automotive marketplace, now the largest in the world.

Sampson introduced Ding Lei as the company vice chairman, co-founder and managing director of Faraday Future. Lei had previously worked in the automotive industry for 25 years, including a position as CEO of General Motors in Shanghai, helping sell 300 cars a day for GM until 2011.

Although he was proud of his achievements, Lei later regretted the added air pollution that was being created by the cars he sold. He told a story about a Chinese woodcutter who chopped down 100,000 trees but was disappointed by the loss of his forest. The woodcutter spent the rest of his life replanting the missing trees until he replaced all 100,000.

“He wanted to create a super electric ecosystem for transportation,” Lei said.

Jia’s SEE plan envisioned an electric car powered by clean energy, connected to the Internet and enveloped by an ecosystem of customized digital apps that would also transform the user’s daily driving experience.

With these goals in mind, Jia hired Sampson to help design the working platforms that could be engineered into finished vehicle products.

Sampson had served as an automotive engineer for Jaguar and Lotus, before joining the vehicle and chassis design team at Tesla Motors, where he worked on both the Model S and Model X. His vision for Faraday Future was to create a variable platform architecture, or VPA. With this approach, a singular vehicle chassis design could be quickly stretched, widened or reconfigured to create multiple vehicle platforms and product lines from the same basic architecture, simplifying manufacturing and inventory requirements.

The underlying format of Faraday Future vehicles is very similar to the Tesla Motors chassis design, using the same “skateboard” concept that has been around the automotive industry for three decades. The battery cells are located under the floorboard of the vehicle to provide a low center of gravity and an elongated space for energy storage. The basic rolling platform can be driven by multiple electric motor configurations to provide different levels of performance and range.

Kim had previously worked on design teams for the BMW i3 electric car and the i8 plug-in electric hybrid. Both production models showed that BMW was serious about electric car technology at the time, while maintaining sleek European design standards. The i3 also incorporated more carbon fiber composite materials into the body and chassis components of the vehicle.

Kim and his design team have continued to innovate at Faraday Future. They used virtual reality stereoscopic goggles and interactive gear to conceive their designs digitally in three dimensions. Then, the team built out testable 3-D models within computer server farms that could be easily tweaked and adjusted on the fly, while also enabling the use of 3-D printers to create solid models of the digitized components for physical testing of fit and finish.

Not only did these design techniques embrace science fiction fantasies that integrated computer-aided design with manufacturing, the team could also skip several traditional steps in the automotive design process, such as labor-intensive sculpting techniques and related materials that were no longer necessary to derive early-stage vehicle concepts.

“We wanted to make a serious statement,” Kim said, “a preview of our DNA and FF products to come.”

The unveiling of the vehicle was accompanied by pulsing lights, sound and wraparound video graphics.

Like an “electric Batmobile,” the futuristic look of the FFZero1 has a significant “wow” factor.

The driver looks through a glass bubble with a 180-degree view. The vehicle body had been sculpted from lightweight carbon fiber and composite materials that merge black and white skins.

The variable platform architecture can accommodate a variety of vehicle body types, enabling the team to experiment with the use of “aero-tunnel” designs that allow air to pass easily around the vehicle and through the center of the body, in order to reduce drag while also cooling the battery pack. Kim described the external air flow paths as a “UFO line,” whose stylistic edges will be a signature design look for all Faraday Future vehicles.

With the driver in mind, the Faraday Future team designed the FFZero1 from the inside out. The single-seat cockpit looks more like the inside of a fighter jet with a seat that is reclined 45 degrees to a “zero-gravity” position that provides more comfort while also reducing the vehicle’s vertical profile.

A heads-up display on the dashboard console can provide augmented reality information to the driver in real time. As the vehicle’s navigation system learns the driver’s preferences, it can overlay images of shopping and recreational choices available at each passing location.

The driver’s smartphone can be mounted directly to the steering wheel of the car, providing continuous access to preferred apps, while enhancing the mobile experience. Voice control and voice recognition will be the primary communication mode the driver can use to interact with the customized app ecosystem.

The electric-power drive train inside the FFZero1 integrates four AC electric motors to deliver the equivalent of 1,000 horsepower, allowing the vehicle to accelerate from zero to 60 miles per hour in under three seconds up to a top speed of 200 miles per hour.

Kim referred to the FFZero1 as a “car of concepts” that showcased design directions that the company will embrace for future production vehicles that will be built at its planned factory in North Las Vegas. A groundbreaking ceremony for the 3-million-square-foot facility will be staged at the Apex Industrial Park later this month.

For more information about Faraday Future, visit the company’s website at www.faradayfuture.com.