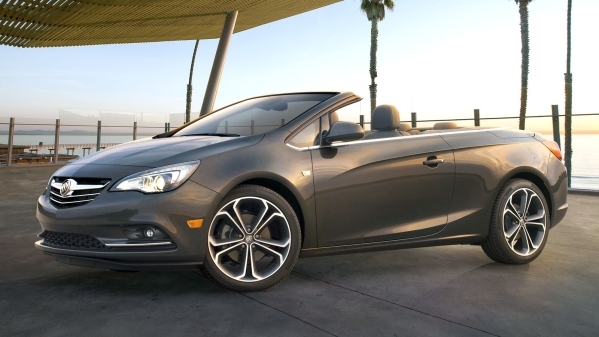 If you were perhaps wondering what would replace the Chrysler 200/Sebring convertible after departing at the end of 2014, it’s actually a Buick. Originally developed in Germany at General Motors’ Opel facilities, the Cascada is being fed to North American audiences wearing the same name as its Opel counterpart.

That’s just aces with Buick, which can always use some added eye candy to lure customers to its showrooms. In fact, the last convertible to take up residence behind the glass walls was the Buick Reatta, which ended its run in 1991. From grille to tailpipe, the Cascada is one handsome hunk of iron and is mildly reminiscent of the late Mitsubishi Eclipse convertible, only slightly longer.

The insulated power-operated soft top can be raised or lowered in 17 seconds and at vehicle speeds up to 31 mph. When stowed, the lid is hidden beneath a hard tonneau. At that point, trunk volume shrinks dramatically, but with one or both halves of the rear seat folded flat, there’s a decent amount of stowage room for bulkier items.

The Cascada’s platform is the same one used by Buick’s Verano sedan, which is as good a starting point as any. But the unique-to-Cascada engine is a turbocharged, 1.6-liter four-cylinder that delivers 200 horsepower and 206 pound-feet of torque. A six-speed automatic is the sole transmission choice.